You’re all waiting to hear about Saturday’s concert aren’t you?  I imagine you couldn’t sleep for wanting to know.

Our band was the first one performing Saturday morning, and we had to be there by 8.  Since I live more than an hour away I booked myself into a hotel down the street from the venue so I could have a relaxing morning.  And so I could sleep in without having to deal with a particular sheltie girl who shall remain nameless.  But I didn’t sleep well.  The room was hot and eventually I just turned the heater off completely.  I was worried about sleeping through the two alarms I had set.  I had a long and detailed dream about not being able to find the high school room where we leave our cases and coats, and being late, and running through school hallways.  I worried that the car wouldn’t start in the morning, having sat outside in below zero temperatures all night.  Maybe I’d spill something on my black dress clothes at breakfast.  Maybe I’d fall down the hotel stairs or slip on the ice in the parking lot.  Maybe I’d forget my instrument or lose the keys to the car.

None of that happened.

Everything went smoothly according to my detailed plan.  Up at 6:30, downstairs for breakfast at 7:00 (wearing my jeans and a sweatshirt just in case), load the car up at 7:45, drive to venue, arrive at 7:48.  Meet the rest of the band members in appointed room, get escorted to our warmup room.  Things were good.  The director was relaxed.  So were we.  Even the thought of being critiqued by the composer of our most difficult piece didn’t bother us any more.  We had prepared.  We were the best that we could be.  She ran us through the first piece of music, reminding us to watch her at a certain spot, not to slow down at another.  Things were normal.

My clarinet ceased to make any noise.  No matter how I blew nothing happened.  As the band continued to play I switched reeds.  Nothing.  I went to the third reed.  Nothing.  I went back to the first, checked pads, springs, nothing seemed out of order.  They were playing the difficult UFO Concerto now, and they never sounded better.  I was frantically trying to blow any note.  Eventually I got a few notes out, but only those that were the most open, meaning the fewest fingers closing the fewest keys.   And by then it was time to move to the stage.

I basically lip synched the entire concert.  I could play at best 7 notes.  I fingered along, breathed in all the right places and when one of those 7 notes came along I played enthusiastically.  Thank goodness there was nothing in the program that required a third clarinet solo!  And even though I wasn’t really playing, as I counted out the rests and played what I could, fingering the rest, I have to say I really enjoyed myself.  The band was focused, as we always are at this event.  Things we had worked on came together.  The music soared just the way it was meant to.

And our world renown judge?  Johan de Meij was a gentleman and obviously a talented artist with a vision.  We played two of his pieces at the concert, and he went through a good portion of each with us, adjusting nuances of single notes, phrasing, instrumentation.  We played.  He directed, head tilted as he concentrated.  He waved us to a stop and explained the meaning behind the sound,  why a chord was structured the way it was, what it must convey.  We played again, he nodded.  At one point he flung out his hands and, grinning like a little boy, said “This is just so much fun!”

I agree Mr. de Meij.  It was so much fun.  Thank you for making our day.  On the drive home I popped last  year’s festival CD into the radio and turned it up.  Loud.   He told us that wherever he goes, as he teaches students he begs them not to stop playing when they get out of school.  Join a community band, he says, they are everywhere.  Keep playing.  Don’t put that instrument away in the attic.    He’s right.  I am so blessed to still have music in my life.

The drive home took my by the town I grew up and I considered driving through it just for nostalgia.   I thought of my folks and all the band concerts they’d been to, all the support they gave us all to follow whatever moved us.  I wished they had been in the audience to see this one.

And then I thought… odds are good that they were.

At home, tired and happy I went out to get the mail.  And there, among the bills and statements was a handwritten envelope with a return address and name I recognized as old friends of my parents.   I worried that they were giving me news that one or the other was gone; I hadn’t heard from this couple since my parents died in 2004.  I hurried inside and opened the letter.  Out fell two photographs of my parents, taken in 1954, one year after they were married.  They are sitting together, holding hands and smiling big happy grins.

There they were.  On a day that I wished for them to be near, they fell out of an envelope sent to me by people I had forgotten all about.  Just because she ran across the photos, she said, and thought I’d like to have them.  So she sent them to me on a day I was missing them. 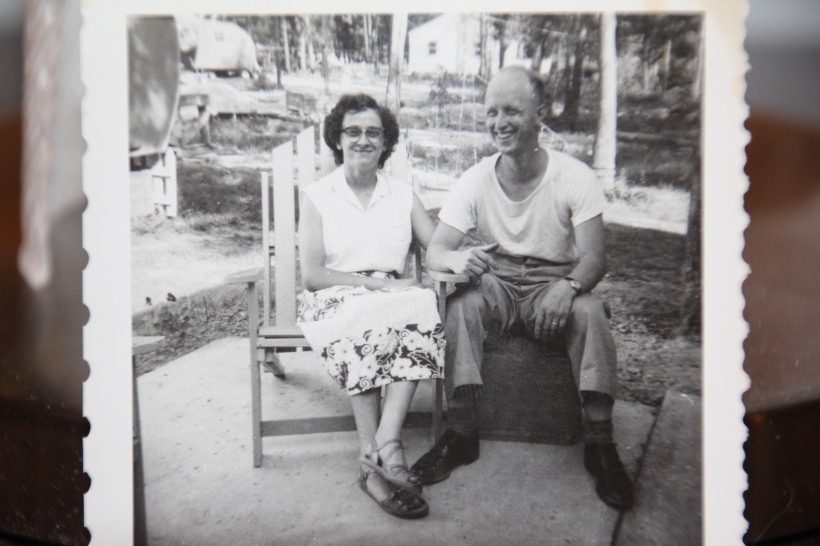 Yes.  Yes it does. This morning my clarinet plays perfectly.  Guess Mom worked on it over night.