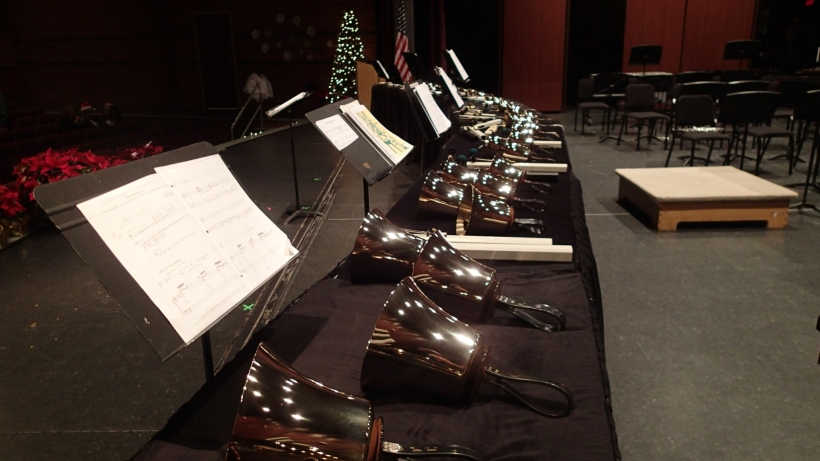 For me the Christmas season doesn’t officially begin until after our community band plays it’s holiday concert, and this year this past Tuesday was the night. Unfortunately this week is also the week I’m struggling through an awful cold complete with a hacking cough — the kind that starts as a tickle in the back of your throat and builds until you’re practically gagging, tears streaming from your eyes.

I went to the dress rehearsal Monday night expecting to have to leave early, but I found that as I played I began to feel better. My head cleared, my chest felt lighter, the cough receded. I made it through rehearsal with only a few sips of water.

I figured I had it in the bag.

I coughed out there until I was pretty much coughed out, and, grabbing my cough drops, my bottled water, my instrument, music and Santa hat, I headed inside. I felt pretty good again.

Our concert began with a performance by a bell choir. They make beautiful but quiet holiday music. I sat in the audience, in the center of a row sucking cough drops and drinking water. Straining to only cough during applause between numbers.

I felt the old familiar tickle in my throat. Oh no. Please don’t let this be one of those coughing jags. Please. I checked to my left…three people between me and the aisle. I checked to my right…two people sitting over there.

The piece on stage ended and applause started. I left my music and Santa hat on the floor, grabbed my instrument, put my head down, and, trying to muffle my coughs, ran down the row of seats and over the top of the two elderly people sitting in my way.

I stepped on the lady’s foot. She yelled “OWW!!” quite loudly. I hoped the applause was still going, I couldn’t tell over my own groans. I patted her on the shoulder and ran up the aisle and out into the hall. By then I could hardly see with the tears in my eyes as I continued to try not to cough.

In the ladies room I stopped trying to contain myself and just let go. Good thing no one else was in there! It took a long time, long enough for me to wonder if the bell choir was finished and we were up, but it didn’t really matter as I was in no shape to go public.

Eventually I crept back out of the ladies room, red faced and sweaty. Quietly I stood at the back of the hall, watching the bell choir finish it’s last piece. It was lovely. Peaceful. Christmas.

And then it was us. The big round majestic sounds of A Christmas Festival by Leroy Anderson filled the air. I breathed and played and filled my soul with the music of Christmas and it was good. No tickling in the back of my throat. No angst or fear of having to run and cough. Nothing but the sounds of the holidays filling up the space.

And Santa showed up to conduct our last piece.

A perfect ending to a perfect evening with only a slight detour into the ladies room that is best forgotten.

Happy Holidays everyone, from Katie and me. May your time be spent with family and friends, and may we all be healthy and happy going into the New Year. 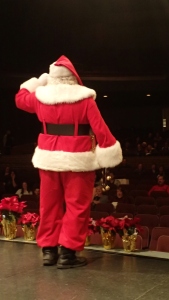 22 thoughts on “Let the holidays begin!”