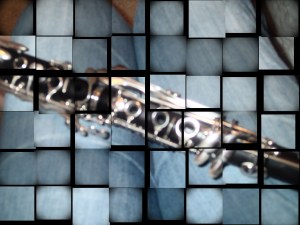 I admit the past few months have been stressful and for lots of reasons. Campaigns and elections, elderly aunt and nursing homes, rotator cuff impingement and physical therapy. What’s missing?

Our community band preformed the Christmas concert way back at the beginning of December, and then we were off until the kids at our local school district went back to school after the holidays. This year that wasn’t until January 9th, and the first Tuesday after that the schools were closed due to weather. So no rehearsal. And the Tuesday after that it snowed again, the schools closed again, and so again we didn’t rehearse.

To be honest, while I was dealing with everything else I was secretly glad we weren’t in rehearsal. What I didn’t realize was that I was missing those weekly infusions of music. I’d forgotten how music fixes things.

I have a feeling I wasn’t the only one glad to be playing with the group again. One of the pieces we’re working on is Undertow by John Mackey. If you’d like to smile a bit too, take a 5 minute break from your stressful life and take a listen to a band in Texas doing justice to the piece.

And then maybe let some other music help ease your personal angst. Check out your local high school; odds are there’s a concert scheduled near you. The young people there love to play or sing to a full house, so stop by and support them and you’ll feel some stress slide away.

17 thoughts on “A little right music”