A few weeks ago I drove an hour north to visit a wildlife refuge and found the trail was closed for hunting. I left not knowing if there was anything there enticing enough to make me drive all that way again. 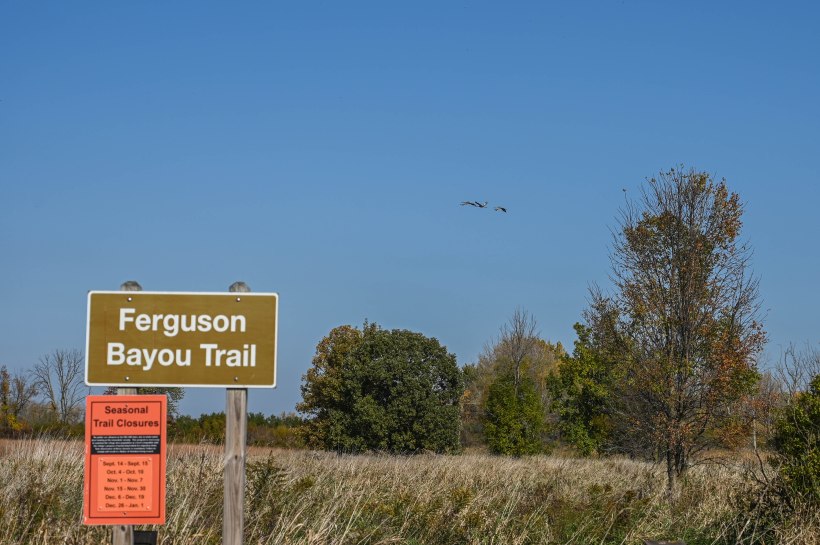 But it’s stayed in the back of my mind, a little whisper nagging me. What if it’s beautiful?

So Sunday I got up early (OK, Katie got me up early as she does every day) and jumped in the car heading north. I arrived about 8:30, the refuge opens at 7:30. As I was driving down the last dirt road toward the parking lot I heard cranes. Lots and lots of cranes. 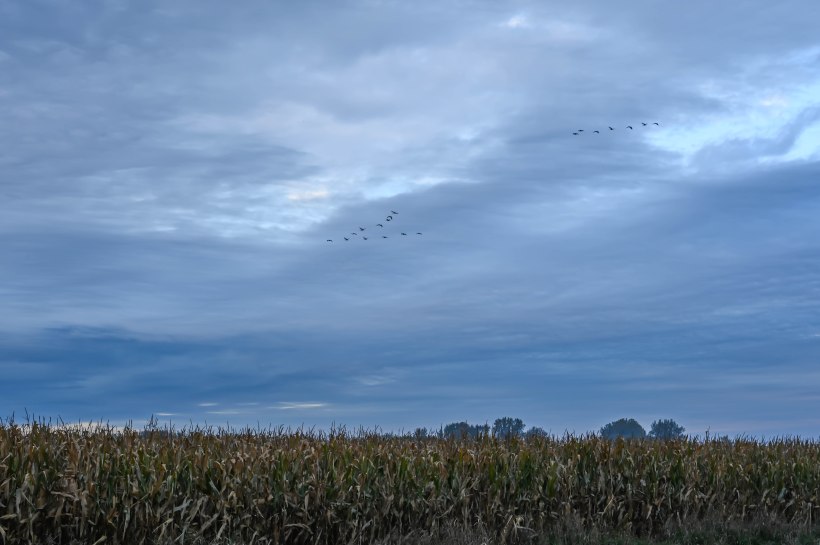 The Shiawassee National Wildlife Refuge is out in the middle of farmland.

I realized I should have arrived earlier, because there were hundreds of cranes flying high overhead, and odds were they had just left the very place I was going. I was missing the mass exodus by minutes.

I stopped in the middle of the road, leapt out and pointed my camera blindly at the sky, trying to capture just a bit of it; I had no idea what I got, but I kept snapping until most of the birds were gone.

Then I drove to parking lot and began to explore.

On the drive north I had been watching the sky, the clouds were really interesting and I was assuring myself that even if the park was a dud, the clouds would make the drive worthwhile. 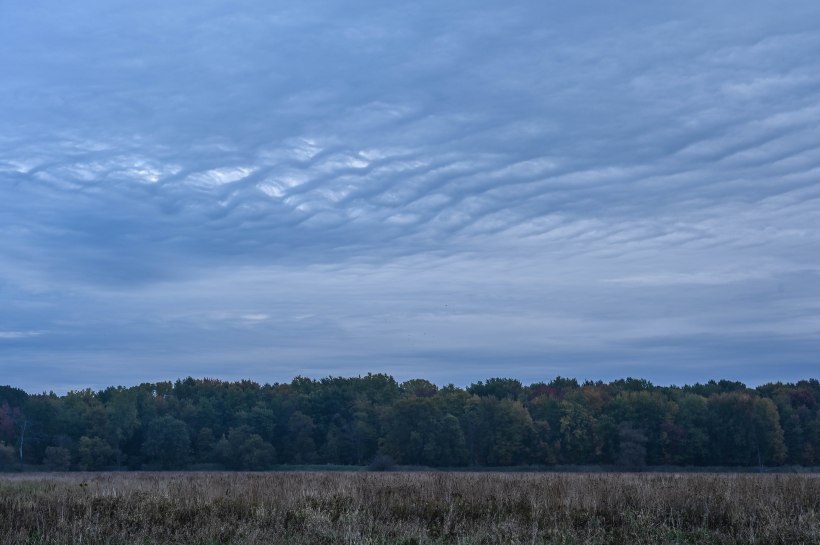 Turns out the park was not a dud, though with the heavy cloud cover and a bit of morning fog the colors were initially muted. Still, I was there mainly to see what kind of birds I could capture. So I moved along, further into the preserve.

The over 9,000 acres was once mostly farmland. There are a series of earth dams, pumps and drains to manage the wetlands now. Most of the time I was walking along the top of a dam, with water on both sides of me. 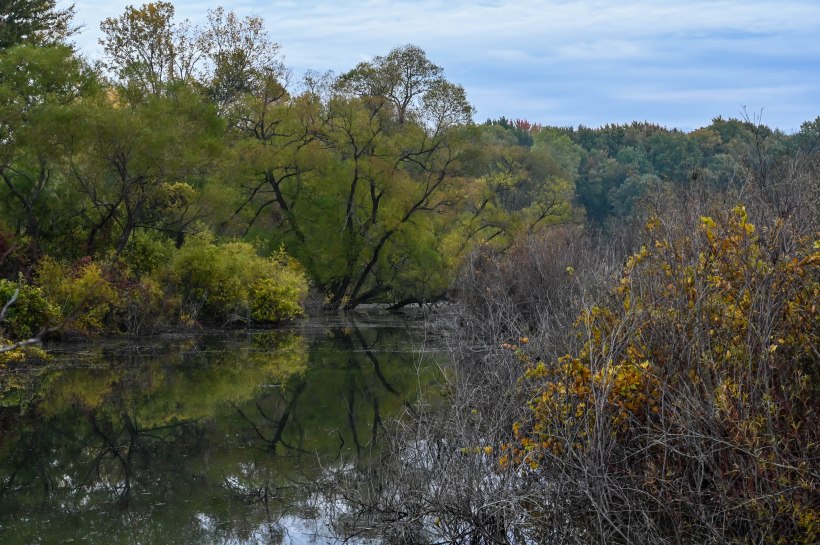 Not a lot of color right at the beginning of my walk, but still beautiful images everywhere.

I seemed like maybe the water was high this year, as full grown maples and hickory trees were standing in water to my right. 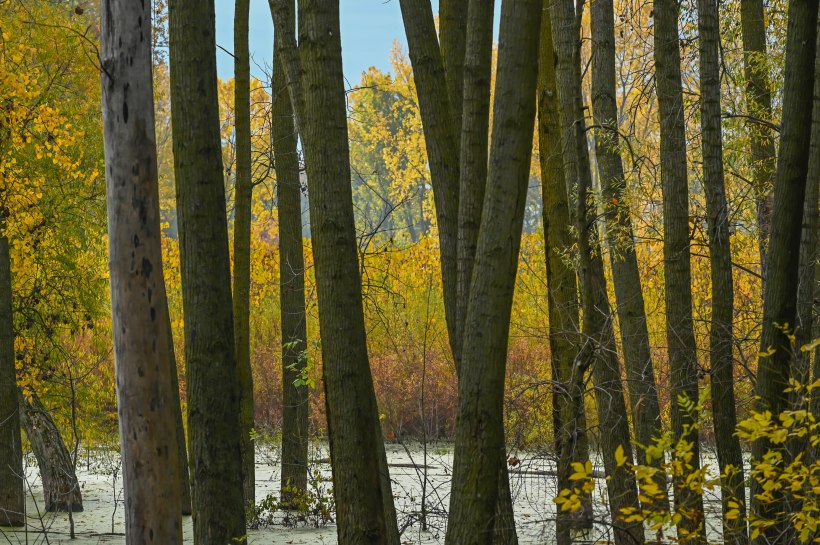 Young cottonwood trees glow on the other side of tall trees.

And to the left, on the other side of a tree lined and water filled ditch were open fields. 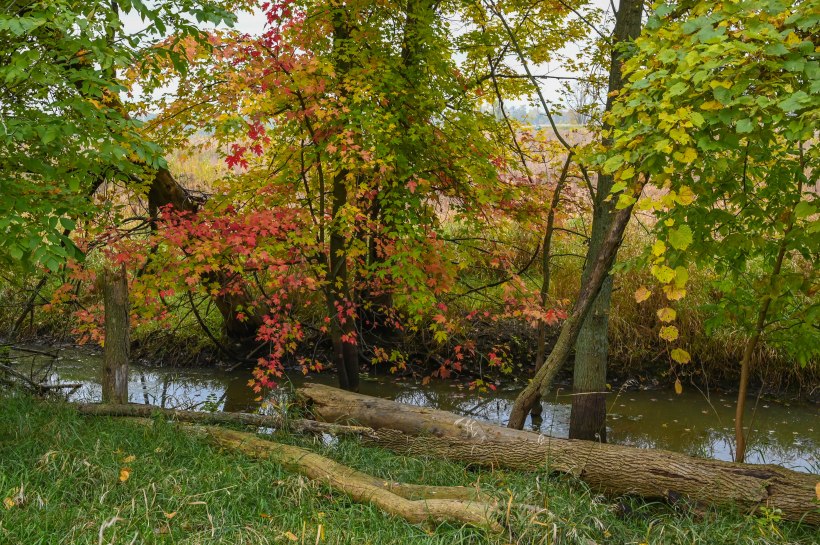 Splashes of red from maples that lined the ditch.

I was headed down a long straight path toward a ‘wildlife viewing area’ that turned out to be a bench sitting in a nondescript place along the path. 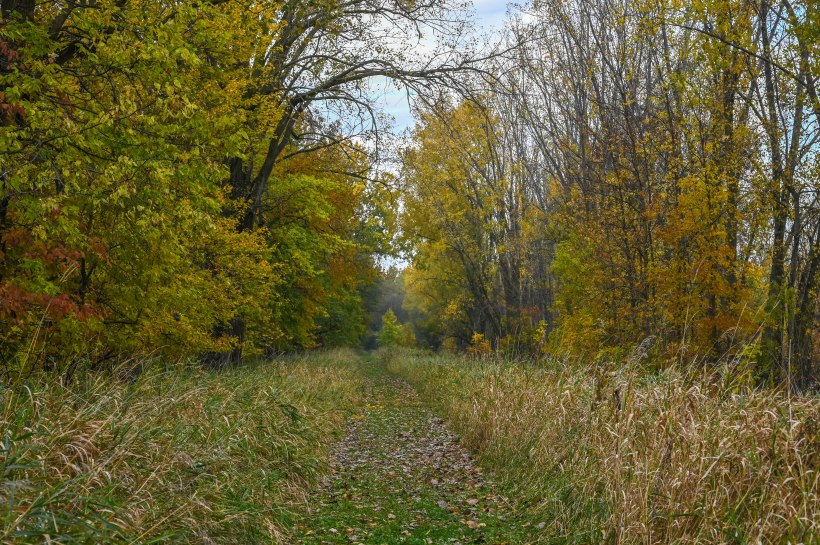 Along the way I accidentally flushed out two blue herons who had been standing in the ditch. I guess I’m a noisy walker. Both of them startled me and I missed catching their images. No time to get the camera up, turned on and focused. I barely figured out where they had come from when they were gone from sight. 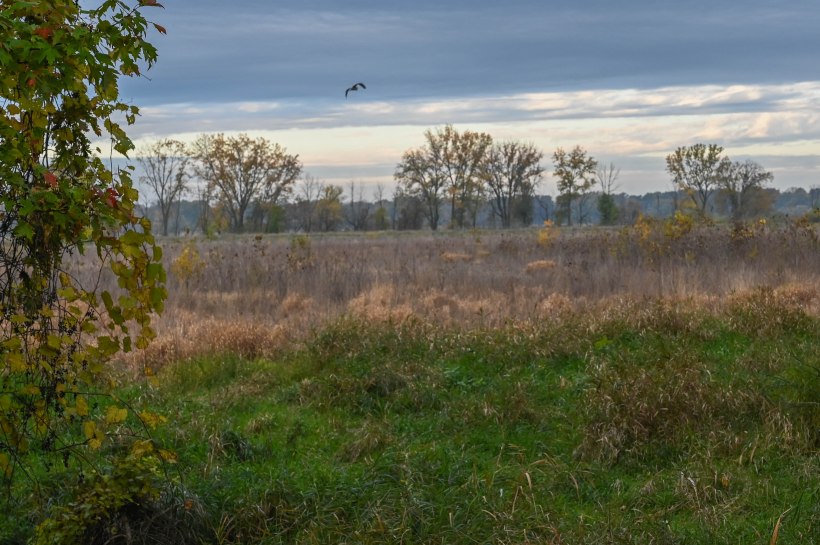 All I got was that little dark spot in the sky. But I know it was a blue heron, and I’m OK with just seeing him.

Darn. Missed each of them by seconds.

I turned around after half a mile, working my way back to the path intersection. A sign said there was a viewing tower 2 miles in another direction. I switched to my long lens and began the trek.

Walking along another earthen dam, water on both sides, I was focused on trees turning colors over to the left. It was pretty amazing. 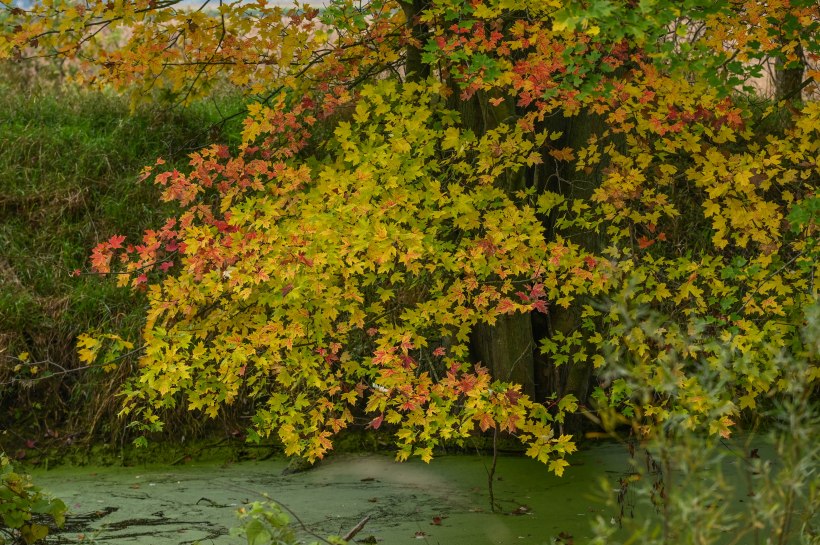 Mostly maples turning, our first trees to give in to fall.

Then I happened to glance to my right and I laughed out loud. 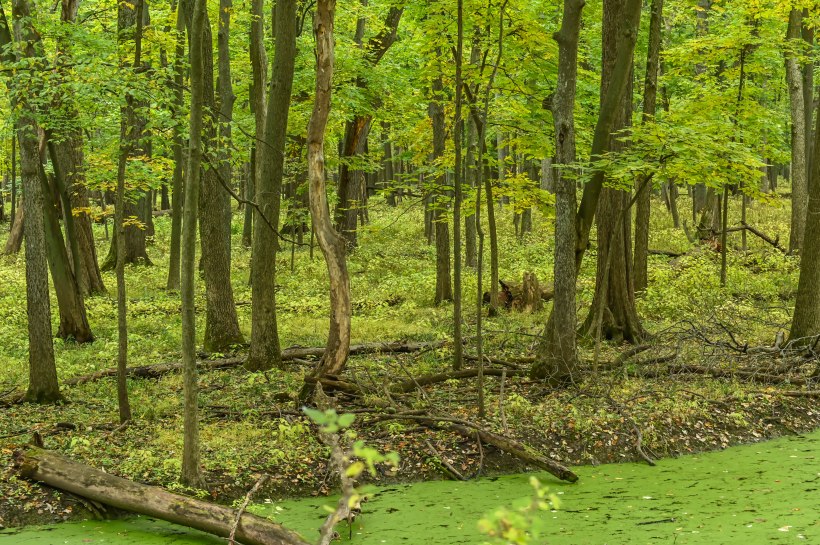 Fall hasn’t made it over here yet.

It was so green even the air seemed tinged with jade.

I thought I caught a glimpse of a little bird, then two, flitting in some nearby shrubs. Ah…maybe I could catch them before they flew off. From their tail feathers I thought they might be dark eyed juncos, though I hoped not. Juncos are only in our area during fall and winter, and they are my first harbinger that winter is really on the way. It’s a reality check I hate to accept. I never got pictures, the little birds remained hidden in the dense underbrush.

I missed them by micro seconds.

I continued on and the colors of the trees got more and more intense. At least the leaves stood still for me while I messed with my settings. 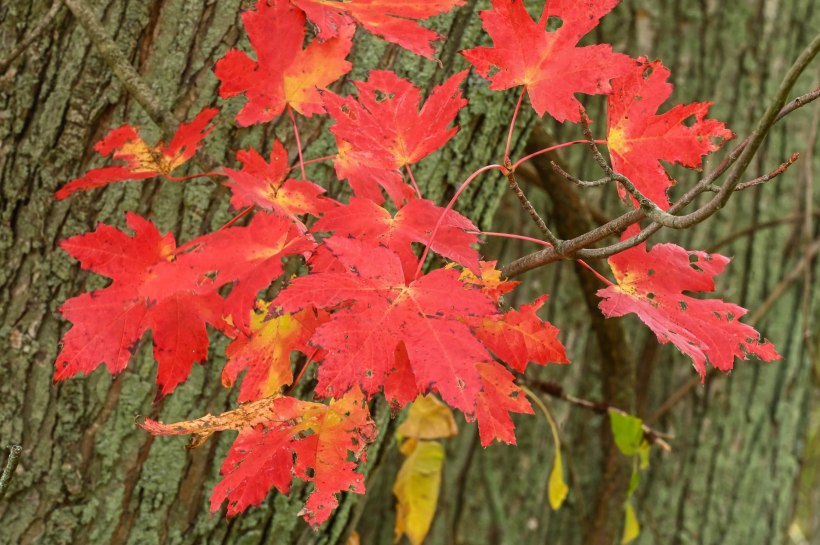 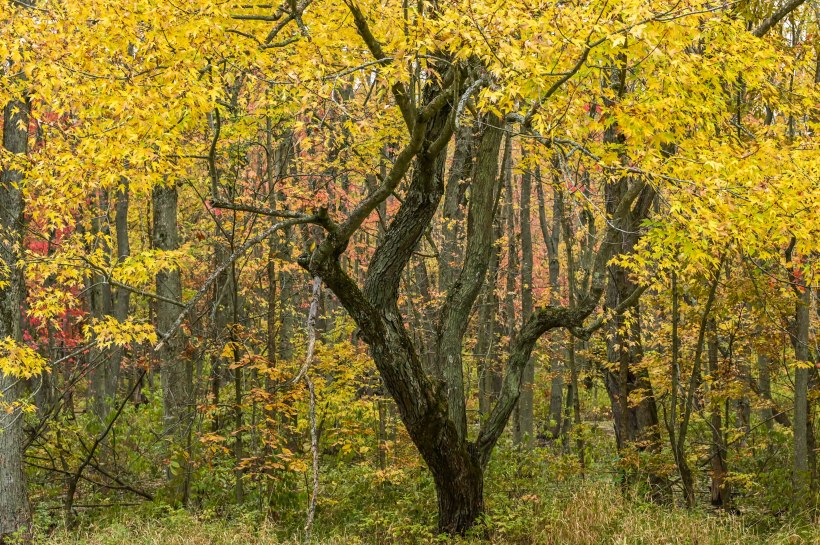 Loved the shape of the trunk.

The long lens was heavy and I hadn’t seen any other birds. But there really wasn’t a good spot to stop and change it, so I slogged on. Even when there weren’t colors it was still beautiful.

Oh wait…there’s something, a family of geese enjoying a quiet moment together. Good thing I still had the long lens on the camera so I could be far away and not disturb them. 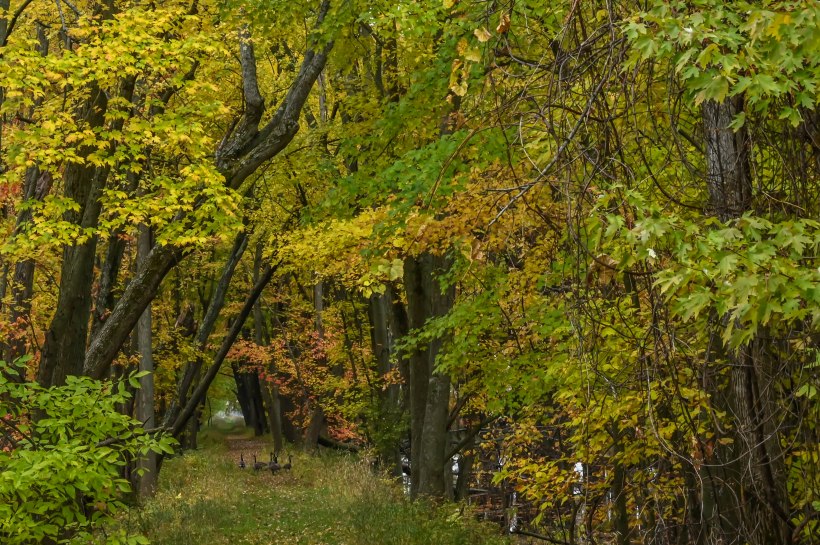 They stood still for me too.

I finally got out to the viewing “tower” which was a large, elevated deck overlooking a huge pond. A long way away were hundreds of geese and swans and probably cranes too, all making a lot of noise. 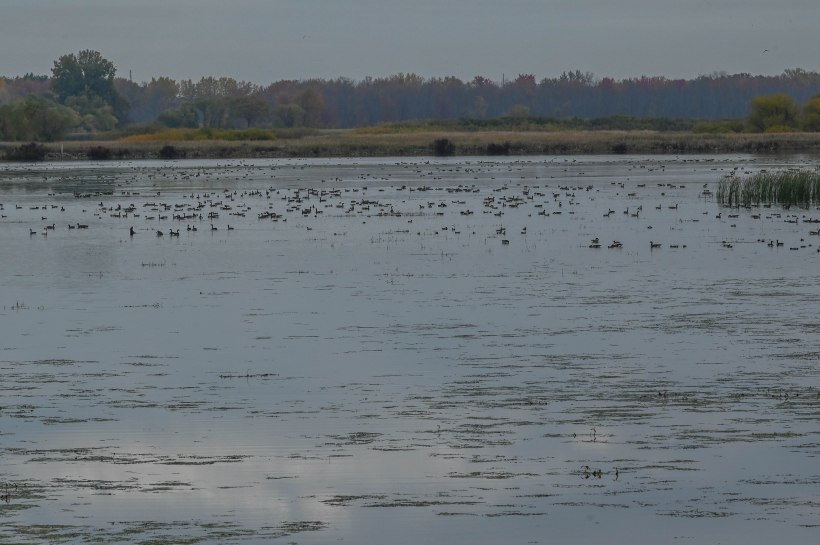 Lots of birds way down there.

I was too tired to walk further in order to get closer, and I figured if I went down there they’d all leave, so I sat on the deck and watched and listened for awhile. And then I changed my lens back to the lighter and shorter version.

The view was pretty from up there. The subtle colors in the fields and marsh looked like an oil painting. But I knew I had over 2 miles to get back to the car and and hour drive home, so I reluctantly started back. 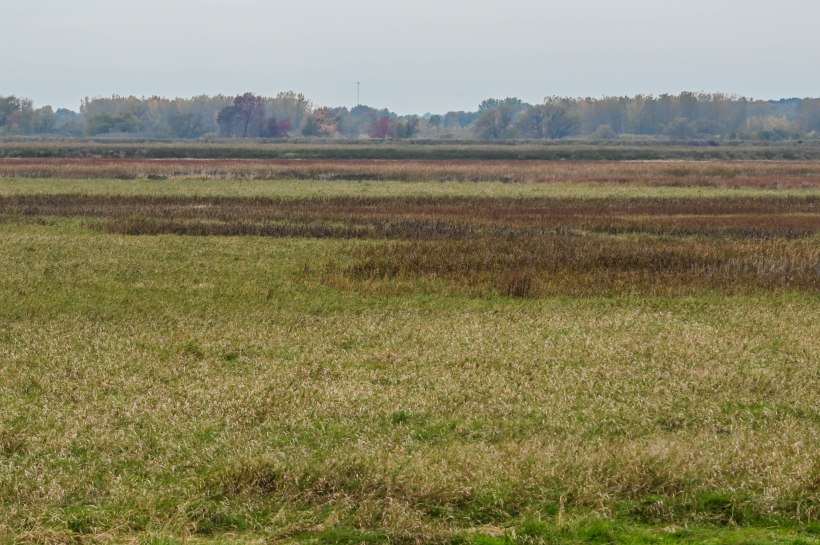 Not as flamboyant as the maples but just as pretty.

Glancing to my left I stopped as a doe and I stared at each other. She was several yards away from me, but well within range if I still had my long lens on the camera. 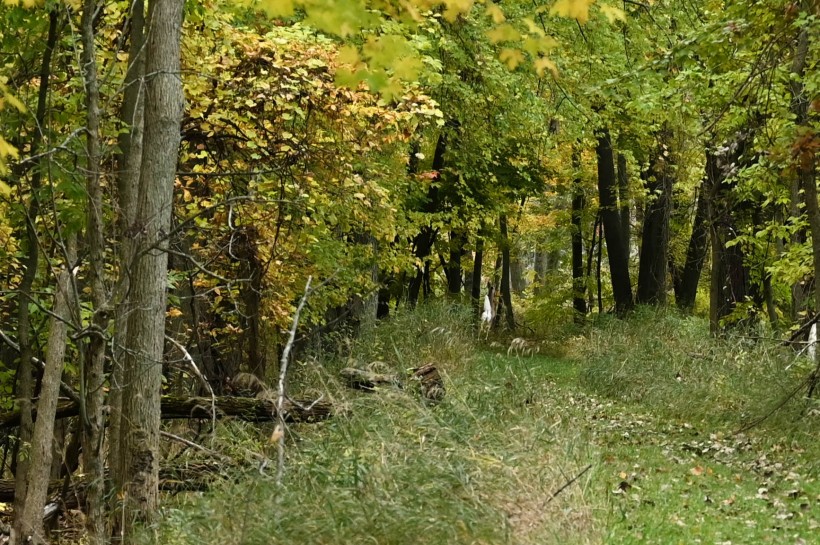 She showed me her white tail of alarm as she ran the other way.

The walk back was faster, mostly because I was focused on not taking any more pictures! Well, maybe one more. And that over there is stunning. But no more!

And then the sun came out. 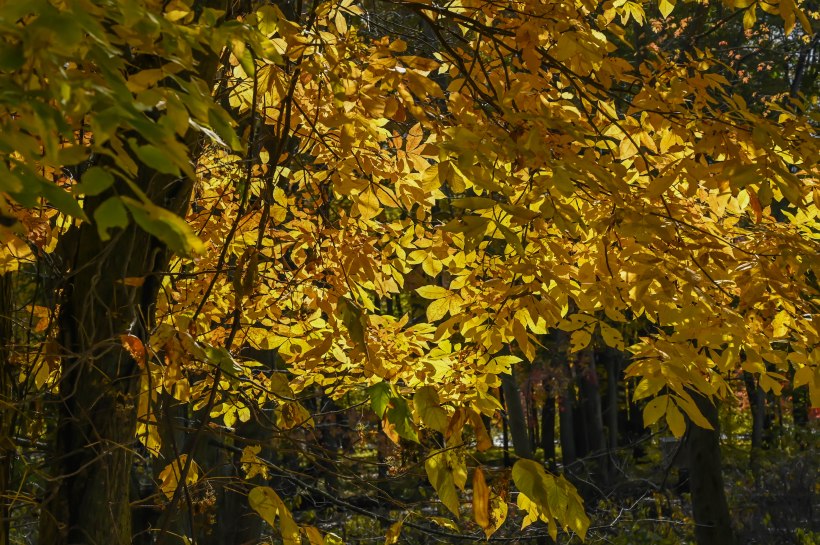 The world began to glow.

I couldn’t resist, even though my stomach was rumbling with hunger, and my back ached from carrying the camera, and my poor little finger, still aching from being broken was telling me it was time to stop. I couldn’t resist. 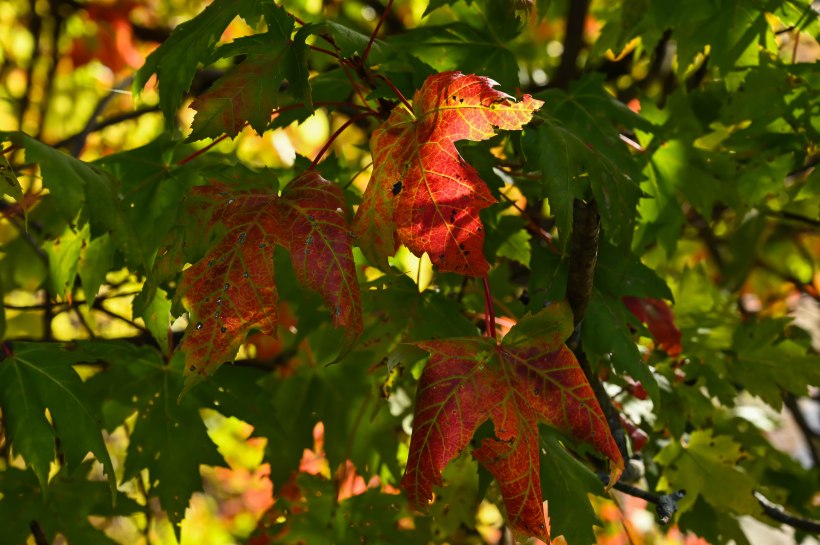 Light is what it’s all about.

But eventually I got back to the parking lot where several cars full of people were contemplating if it was worth it to walk back into the preserve.

I don’t know…what do you think? Even though I didn’t get one single fabulous wildlife image I still had a great time. 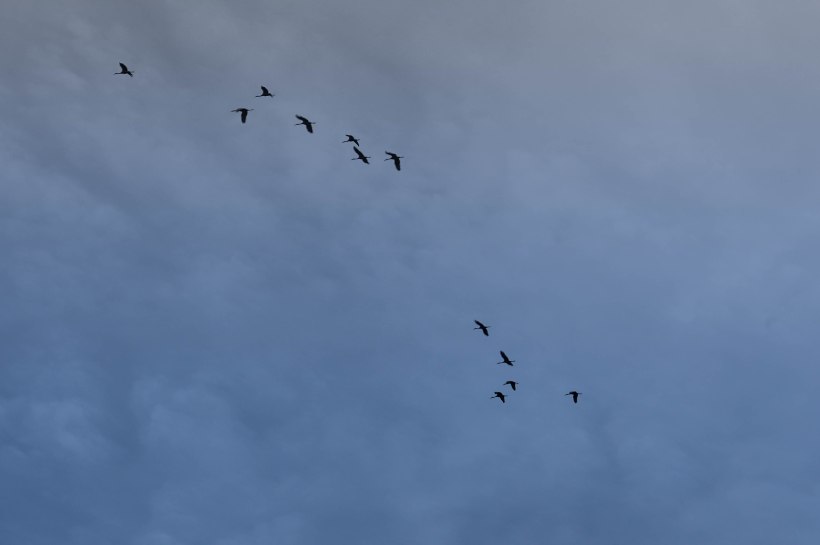 Far far away, but still beautiful.

And I learned a few things.

One, now that I have the lay of the land scoped out, I need to sit in one spot and see what comes by. Walking around only makes the wildlife nervous. Two, I need to leave the camera turned on, lens cap off, and not regret whichever lens I happen to be using.

And three, I need to go up there again before it gets too cold.

Soon all the color will be gone.

24 thoughts on “Missed it by THIS much”