When I left you at Kensington last week I promised to show you some of the craziness happening in their giant heron rookery. The heron babies are now teenagers and I think they’ll be flying free any day now.

How many youngsters do you see in the image below?

Here’s a shot of just one side of the rookery. You can click on any picture in the blog and make the image bigger, I’d do that if I were you to see all the detail. And do this on your desktop or laptop or something with a bigger screen than your phone.

I don’t know either, I think around fifteen. I sure would like to see a few of them leave the nest for the first time. Talk about suspense!

I was hoping to see an adult feeding the teenagers. I’ve seen it once before and those young adults can get pretty aggressive with mom or dad. I remember thinking that somebody was going to fall out of the nest there was so much tugging and pushing going on. 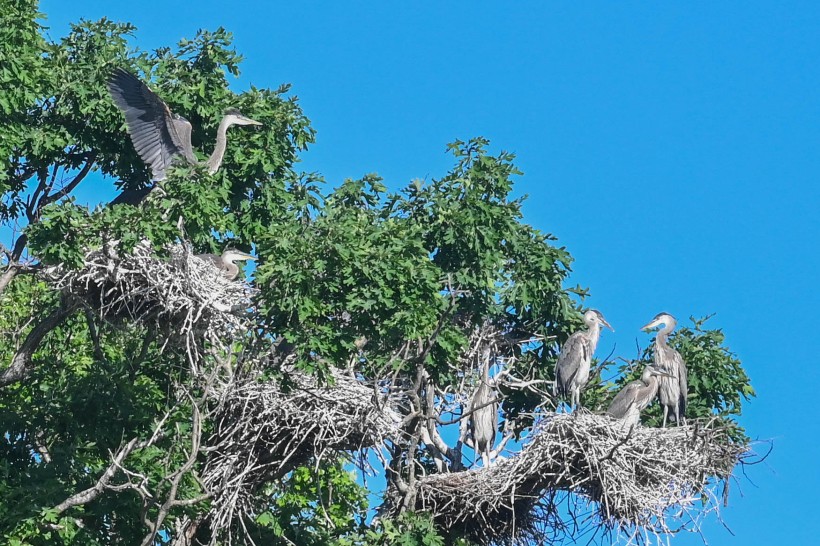 Some testing of the wings, getting ready for takeoff?

But the second morning I got there a little late, more like brunch than breakfast, and I think I missed all the action. There was some sibling pushing and showing off, but mostly everyone was just waiting for the next meal to show up.

There was one flyover of an adult heron. That was exciting for those of us waiting on the boardwalk. After all there are only so many pictures you can take of a bunch of herons standing in a tree.

Accompanied by a harassing redwinged blackbird.

I was about to give up, figuring all the adults were napping after feeding their hungry broods earlier in the morning, when a mama or a daddy showed up to a very excited youngster. 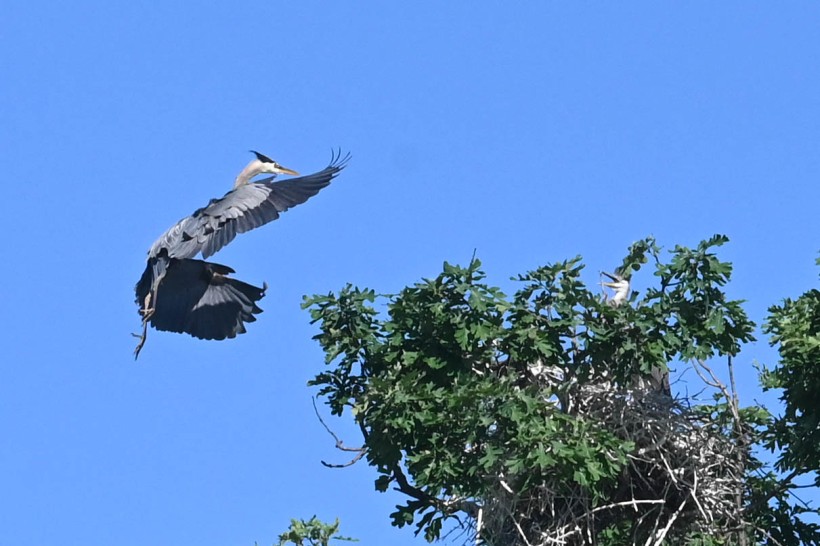 One very happy camper waiting in the nest for a snack.

Everybody else, in the neighboring nests, had their hopes dashed again. 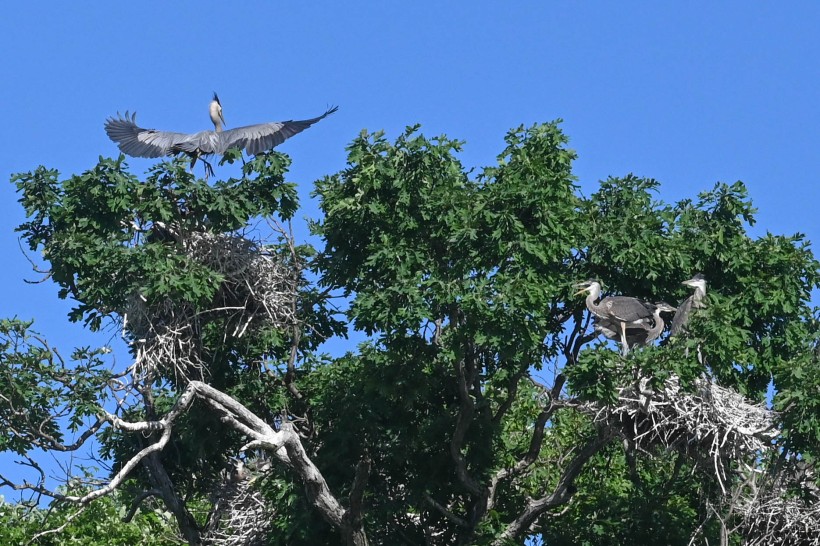 Yep, now things were getting interesting up there!

Hey Jerry! Look at that!

But that was it for the excitement; I figured I was too late to see the show, so the next morning, when Katie got me up at 4:30 I stayed up and got out to the park before the moon had even set.

It was a lovely morning. Doesn’t look like anyone’s awake up in that tree yet.

The light was wonderful.

The usual suspects were standing around waiting for a meal to arrive.

In fact I was so early, and so sleep deprived that I forgot to check the camera settings.

I like this shot anyway, even if it was an accident.

Which is how I got the above image. My ISO was still set at 100 which is nowhere near high enough for the low morning light and a sandhill crane flying right by me.

Meanwhile a heron landed at the very top of the tallest tree in the rookery.

Make way, I have arrived!

He (or she) appeared to be giving a lecture to the captive audience below. 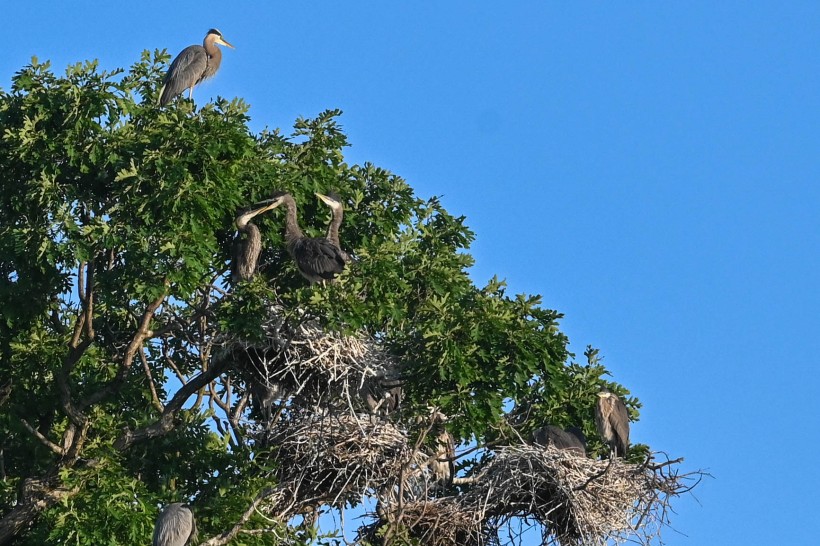 Pay attention kids, I have things to tell you about the world out there.

He or she sat up there for a long time.

After awhile the kids all started looking elsewhere for a snack.

“Hey! Is that mom coming this way?”

And finally he or she gave up and flew away.

“You can’t tell this younger generation anything.”

After all that excitement it was quiet again. I decided to take myself for a walk to see what else I could find. Want to come with me? I’ll try to keep it short as you might be bird-fatigued already.

Oh, there was this other artsy-fartsy image I kind of liked, though it wasn’t what I intended.

Sort of Edgar Allen Poe, though this isn’t a raven.

I fed a jay from a bit of seed I had in my pocket.

“Thanks lady, most people ignore us jays cause we won’t come sit on your hand like those annoying little birds.”

He seemed to appreciate it.

And there was a plump female bluebird way up in a tree watching everything.

“What’s going on over there?”

I had a red-winged blackbird follow me down the path and perch noisily in a tree about 3 feet from my face while I was changing from my long lens to something shorter. I asked him what he wanted and he looked at me like I was crazy. Of course. He wanted something to eat. So I offered him a bit of seed and he came down and took both peanuts and flew off. Little pig. No picture of it, but you can imagine.

Rounding the next corner I saw a sandhill crane couple looking beautiful in a meadow.

Posing like she’s getting her senior year photo taken.

She and her mate and I got up close…

“If I show you the top of my head can I have another treat?”

They were both interested in having a little after breakfast snack… 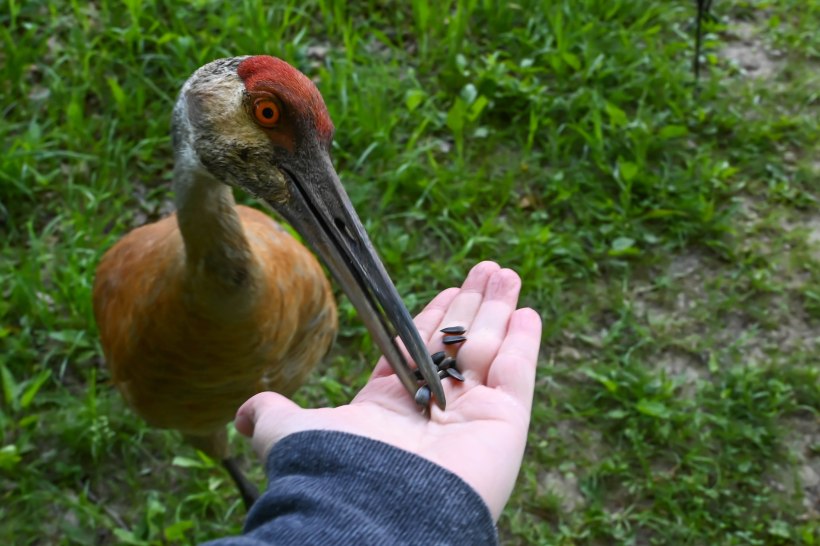 This feels somewhat scary, their beaks are so big, but they are very gentle.

…though only one wanted to take the seed directly from me. I left some on the ground for both of them to share and moved on down the path. 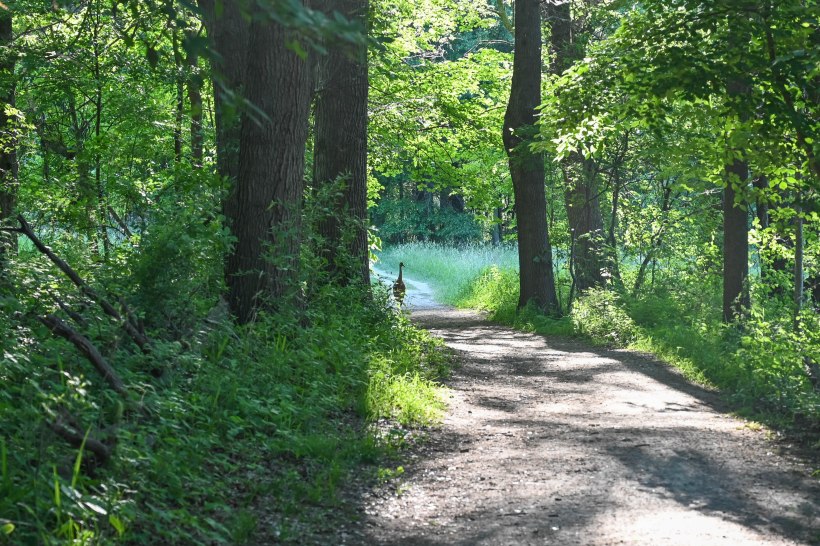 “Bye lady! Thanks for sharing!”

There were other things in the forest that were calling my name. 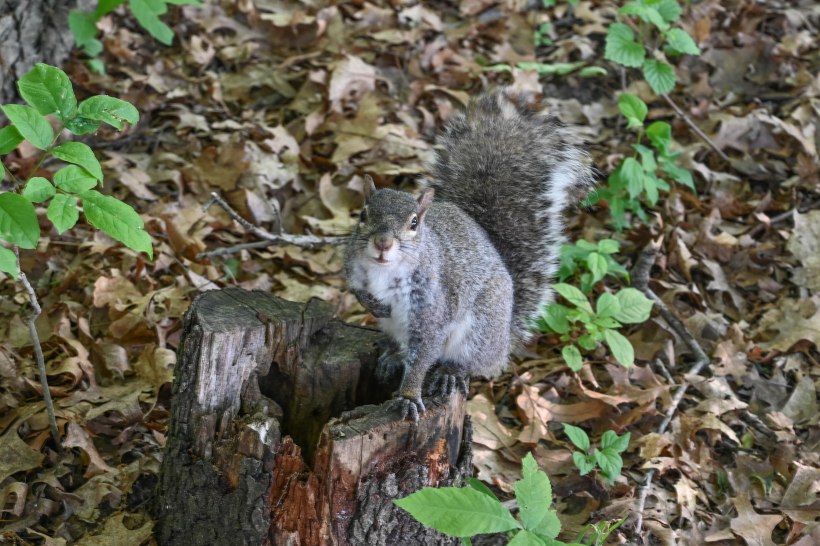 “Hey! You got anything left after those big birds held you up?”

I began to move along faster, I’d already been out there longer than I expected. But it was such a lovely morning and I knew how lucky I was to be able to walk in the woods instead of hunker down at a desk on a Monday morning.

Sure beats going in to the office!

Retirement is a wonderful thing.

Yep, nice to get out of the house and spend the morning in the woods.

Around the other side of the lake I saw a complete sandhill crane family. Dad was standing guard and mom and baby were off in the tall grass. I didn’t get a good shot, but this is the baby, all legs and long beak.

Pretty baby, as soon as it got too far away from it’s mom it scurried to catch up. Dad never took his eyes off them except to shoot me a look.

Almost back to the rookery I stopped to contemplate this plaque on a bench. 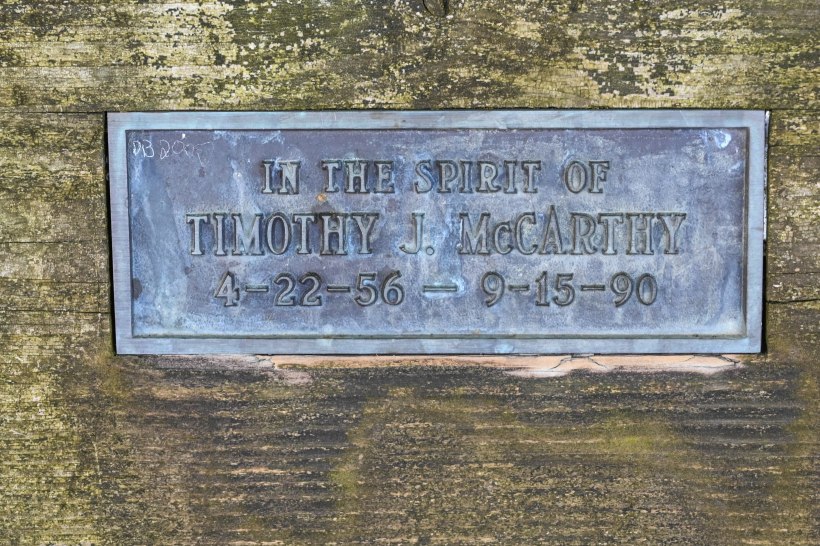 Born 6 days after me, died one week after my wedding day.

It made me realize all over again just how lucky I am.

Then, back at the rookery where there was more horsing around and wing flapping. 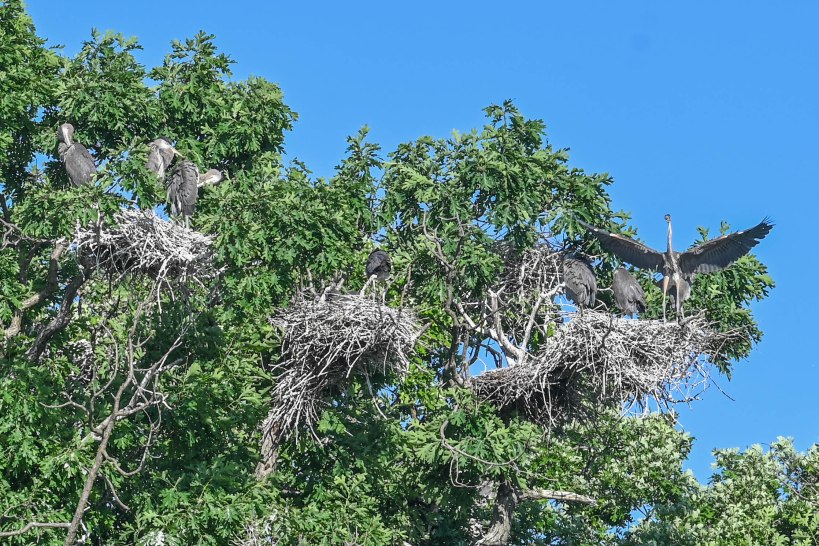 “My wings are bigger than your wings!”

But there didn’t seem to be much else going on so I decided to head home. I didn’t get the shots I had come for, no parents feeding their youngsters. None of the teenagers took a leap into adulthood and flew away. 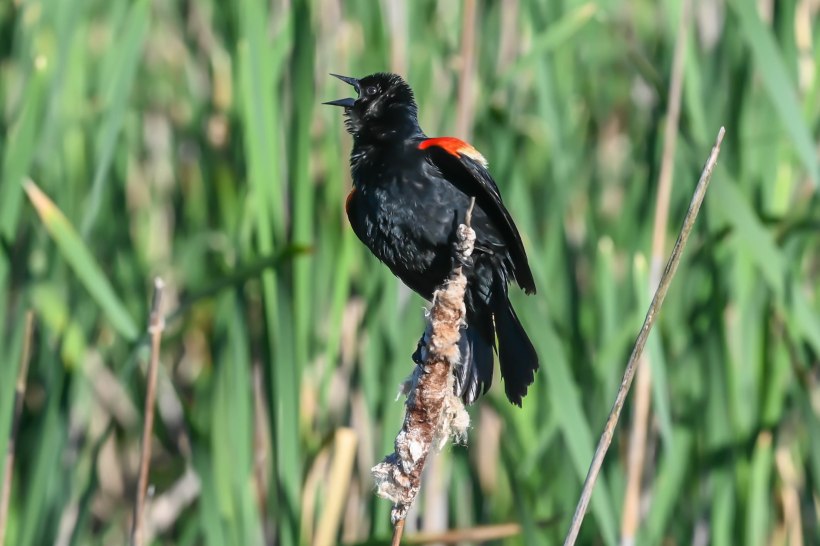 “Come back any time, lady!”

But I saw a lot of really interesting and pretty things. And, as always when I walk in the woods, I came away grateful.

And that made me smile.