Katie here! I just have to share my end of season camping adventure!! I can’t believe that mama and I got to go so late into September!!!

(Hmmm…mama says I need to cut out the !!!!!! all the time. Not everything I say is exciting. She says. Little does she know. Ahem…) 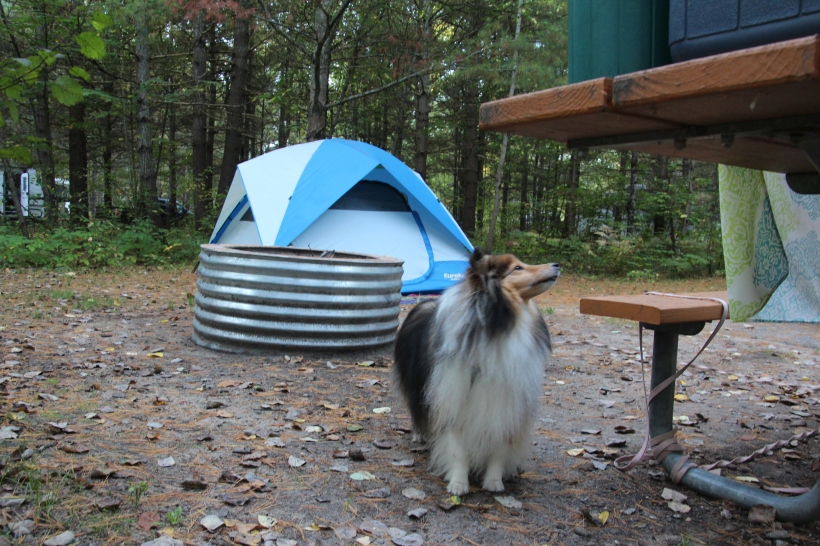 What’s up there mama?

I’ve been telling mama that it was going to be warm this week and that we shouldn’t waste weather like this hanging around in our house. And she finally listened to me. For once. She booked us a site up at Hartwick Pines State Park, and we ended up in the exact same campsite as last year!

Mama liked the site OK, but this year what she really noticed about the park was the grasses up front as you drove in. In the evening the sun touched the seedpods on top and made the grass shine silver… 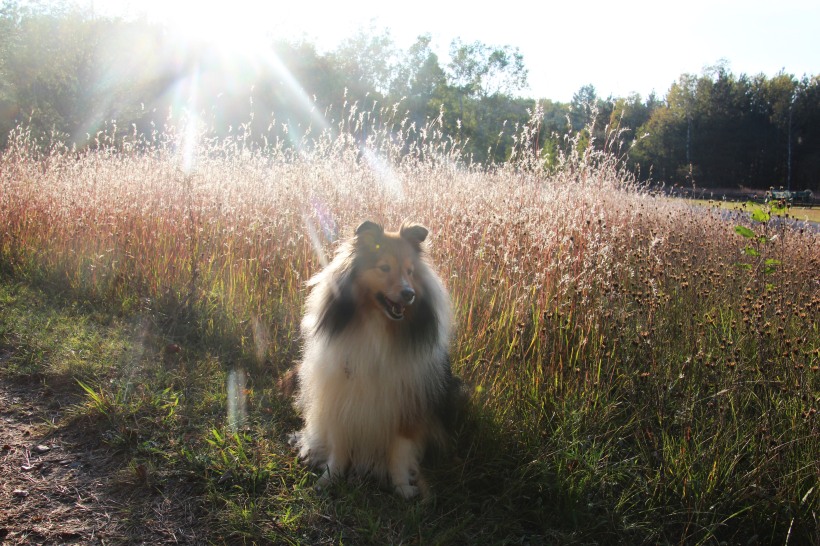 The light shines on me. As it should.

…and in the mornings the grasses looked red. The morning light shows off my coloring, don’t you think?

Mama and I walked out there every morning and every evening just to see the light on the grass. I got sort of tired of sitting next to it in all different light, but that’s the price I pay for mama taking me camping! Apparently my role in every camping adventure, heck any adventure at all, is to be the photogenic element.

No problem mama. I’ve got that down.

We had company one afternoon — mama’s friend Gerry and her dog Sadie stopped by. We went for a walk but it was oh so hot. Mama and Gerry wanted to keep going but Sadie and I decided it was just too much so we both turned around half way down the path and pulled our mamas back to our shady campsite where I could hang out on the cool earth under the table. Sadie dug a nice cool hole to settle into while the mamas talked. 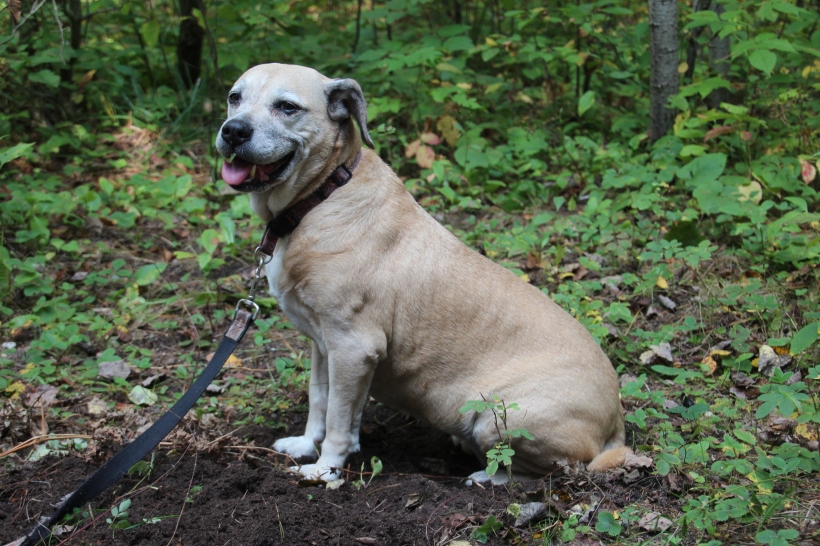 Sadie was proud of her work.

The mamas talked a long time, but Sadie and I were fine with that. Especially when treats were handed out. That’s the only time we really wanted to hang out too close to each other. 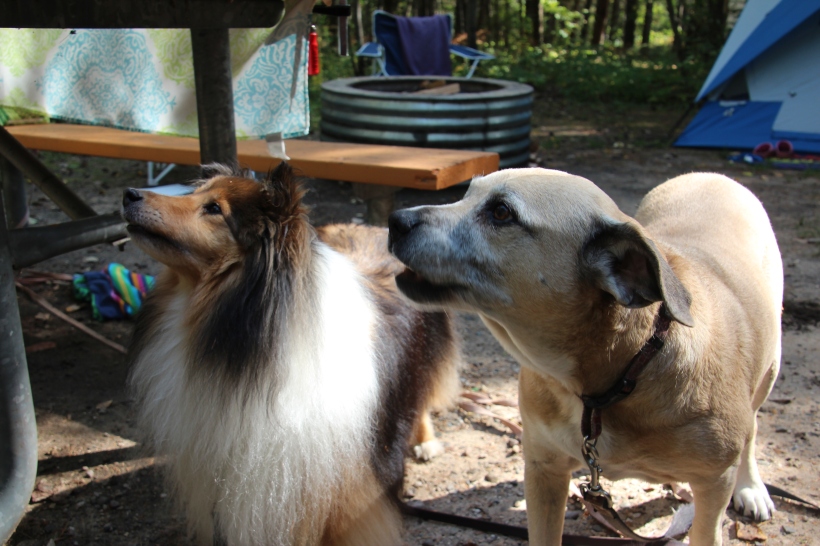 We were polite and each ate only our own treats.

Mama tried to take me on quite a few walks down beautiful trails. She tried early in the mornings and late in the evenings. 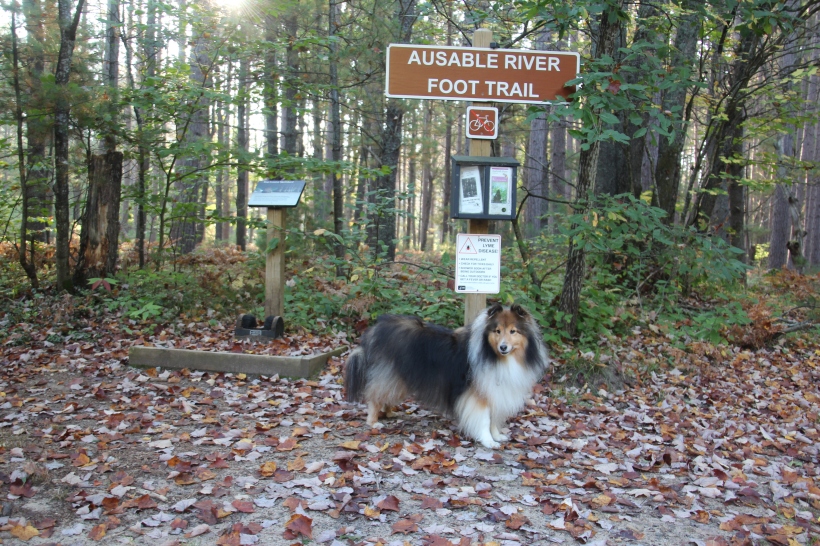 This is probably a pretty trail mama.

She tried paved trails and pine needle covered trails. She coaxed me with treats and she tugged on my leash. 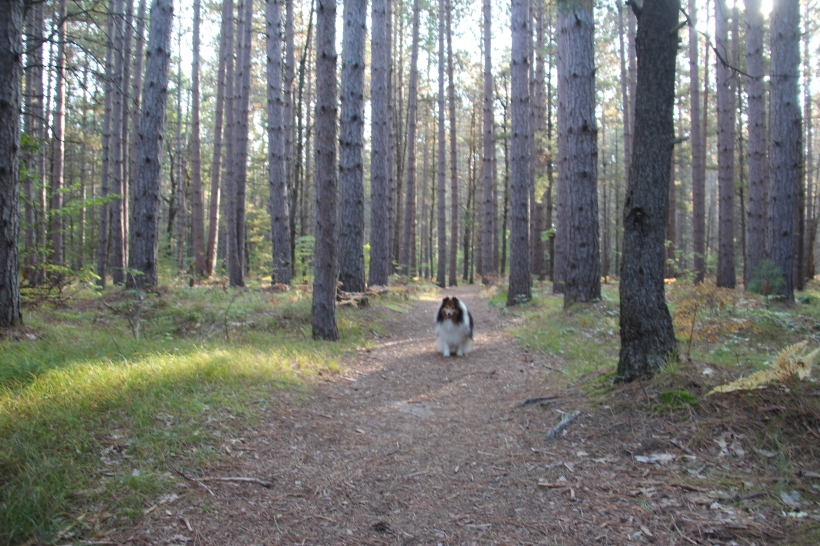 But each time I only went a little way down the trail and then I turned around and tugged her back to the car. I just didn’t want to go for a walk! And what I don’t want to do, we don’t do. It’s a rule of mine. 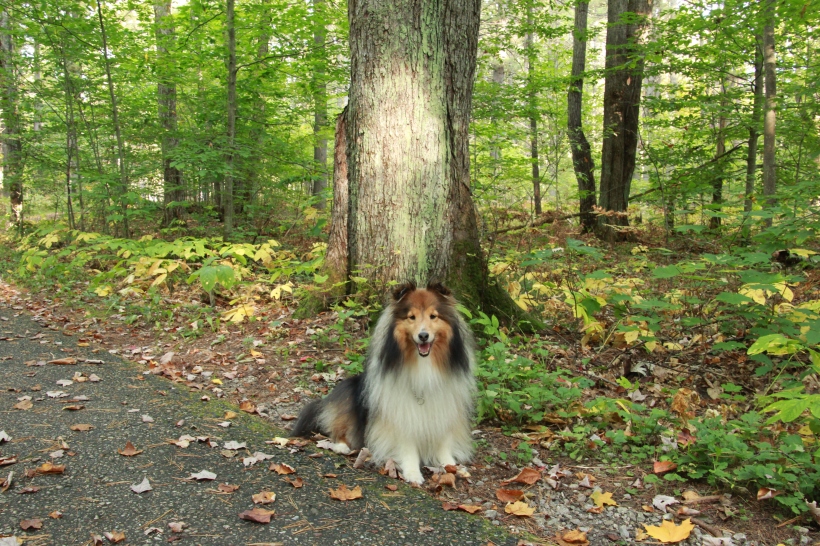 Evening light and me.

Mama says she doesn’t know what was going on. Maybe it was the heat, but she remembers a walk she took me on, earlier in the week, where I did the same thing. We started down a cool woodsy trail and I only went a little way and then pulled her back the way we’d come. Yes it was a hot day, but deep in the woods it was nice.

Anyway, she drove me to see a couple of beautiful lakes that we would have come to if Sadie and I hadn’t protested on our walk that day. I didn’t even want to walk down the short path to see them. Mama pulled me along, and once I was there I had fun sniffing the water. 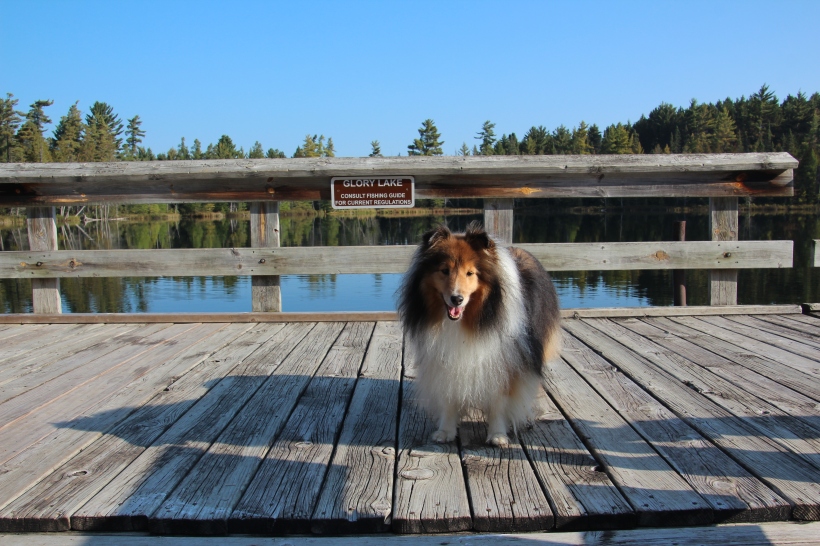 Let’s get back in the shade mama!

I didn’t like the docks though cause they moved and made noises when we walked on them. Once we got out to the end it was OK, but I’d rather not do that again mama!

Our last evening at camp there was a big wind storm and thunder and lightening. Mama was busy trying to pack everything up before it rained, and I was busy barking. Finally the thunder got so loud mama hustled me into the car and we both waited it out in there.

We never did get any rain, and after the storm blew over we ventured out to see what was what. Of course we headed back to the front of the park where it was open so mama could see the sky. And the grass. 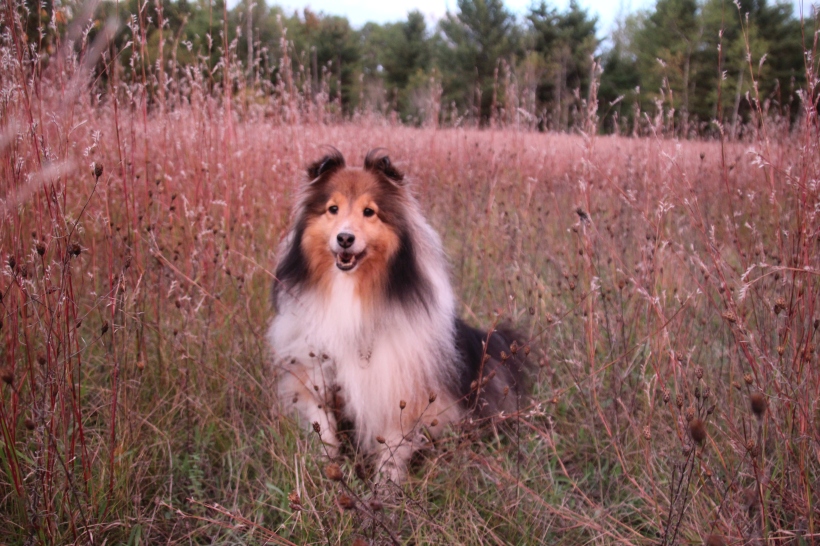 The world through rose colored glasses. Only I wasn’t wearing glasses!

Man, the sky was pink and the grass was bright red! Of course mama made me sit right in the middle of it. She couldn’t stop taking pictures. I was bored, but since she brought treats I figured I’d stick it out and not go on strike.

The next morning mama finished packing up our site. I was sad, but also ready to go home. It was so hot even though our site had lots of shade. I looked forward to our air conditioned house! 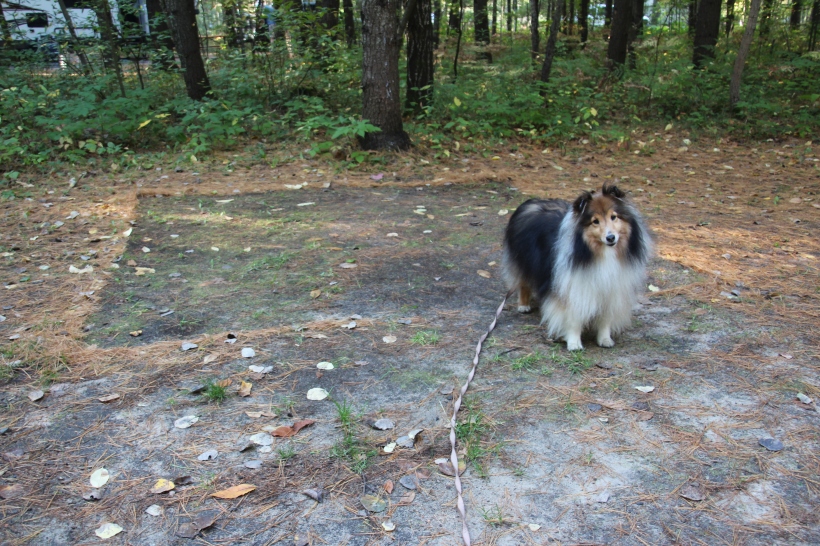 The end of another adventure.

After the car was packed mama took me on one last walk on a trail across the street from our site. It was wide and shady and it was the only walk that I had any enthusiasm for. 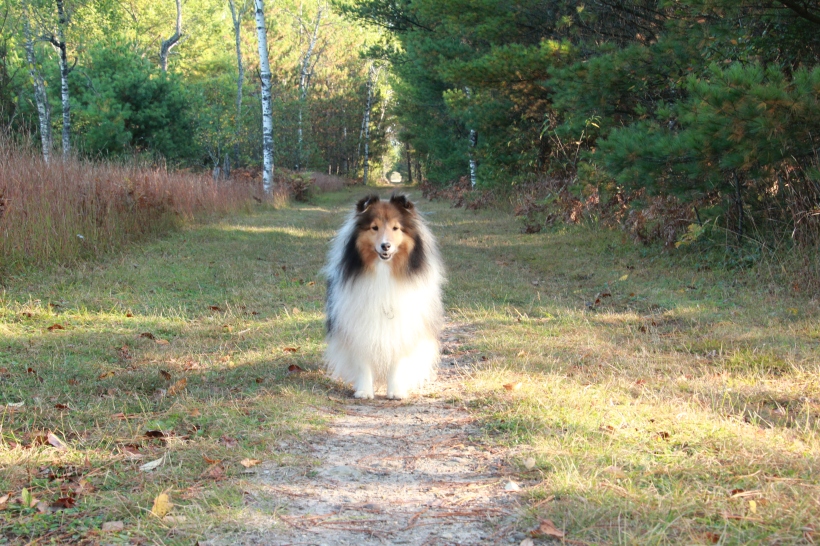 I would have walked further but mama played it safe and we only walked a little way down the road. It was still pretty back there and mama took a few (hundred) photos. I got a few treats and posed a little, but mostly I got to be off leash following my nose.

Maybe that’s why I was happier on this walk than all the others we tried to take. I like going at my own (mama says slow) pace. But mama wasn’t rushing me the other times either. So who knows. 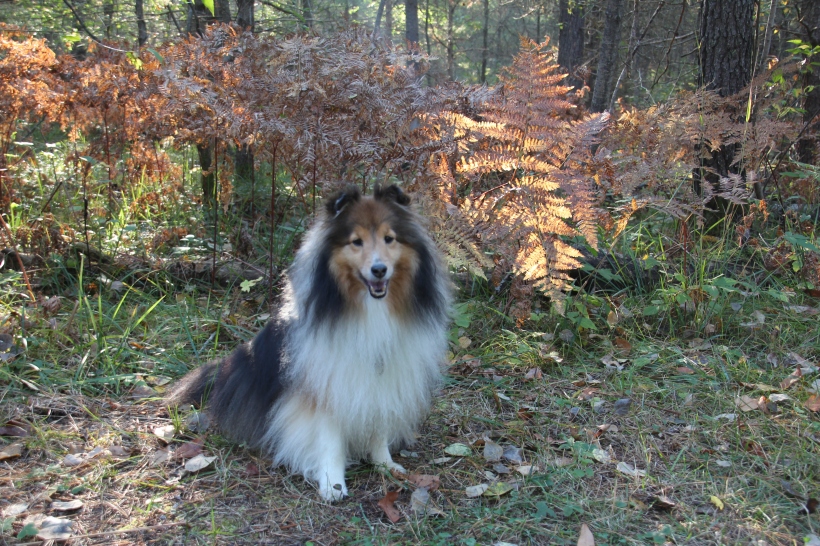 The ferns were all brown. They matched me!

Mama says she’s worried because we’re going to go visit Little Ricky in a little bit and one of the best parts of visiting him and his sister Callie is going on walks with them in their parks. Mama says she hopes that I decide to participate.

I’ll think about it.

Mama says she’ll do another blog to show you all the beautiful things that she found, all those things that don’t involve me. Imagine that; something is beautiful besides me! Hard to fathom, but I guess I’ll read it. A girl can always expand her horizons.

Signing off for now – Princess Katie.

21 thoughts on “Extension of summer, the last camping adventure”