Kayaks waiting for us to begin our adventure.

Did you even know that Detroit has canals? Me either, and I live only an hour north of the city. But I saw an advertisement months ago on Facebook for kayak tours of the canals and I thought it looked interesting.

I know, I know. An advertisement on Facebook? But a friend of mine, someone I haven’t seen in a lot of years, agreed in a comment that it looked fun, and she made all the calls to get us a reservation. 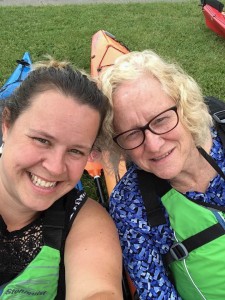 Safer to do this while still on land than once we were on the water.

So Sunday was the day and of course there were thunderstorms predicted. Our early morning 3 hour tour was delayed until afternoon, and in the end that worked out just fine.

We arrived at the marina located just off the Detroit River slightly before scheduled takeoff. We got our life vests fitted and our safety lecture, and then we were in the water. 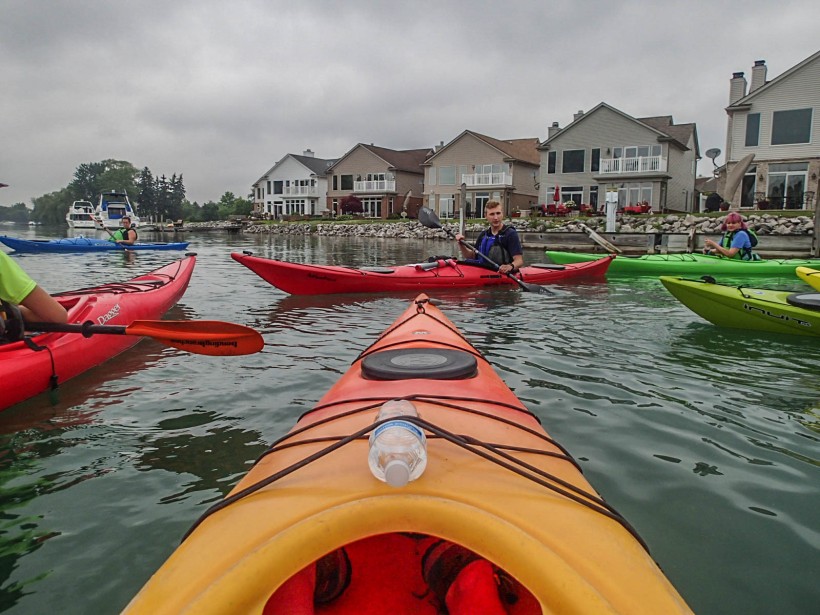 A quick meeting with one of our guides…

We started the tour by paddling around an island, originally built out of swamp land in the 1920s for wealthy people to live in big houses away from the city. Now it’s mostly filled with homes built in the 1990s. 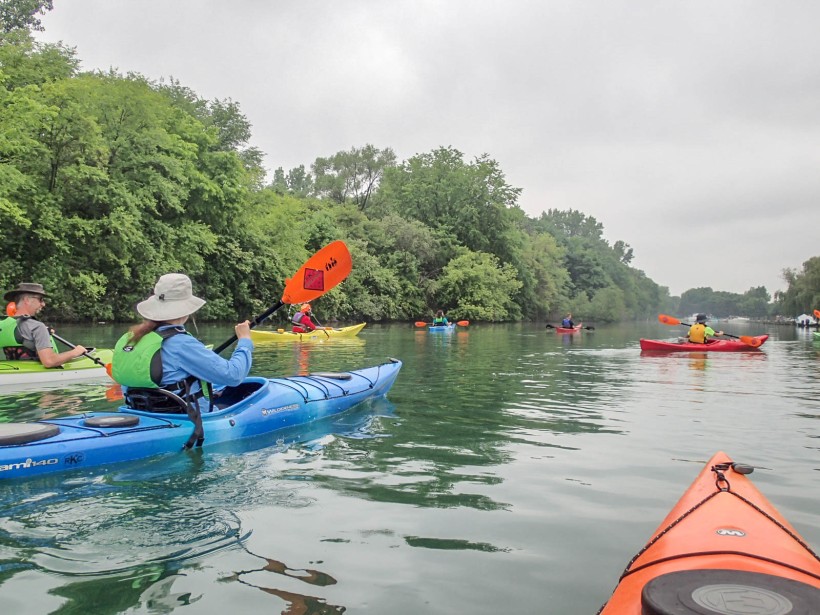 But there are still a few of the original homes left. Like this 30,000 sq foot 2 bedroom mansion built for the Fishers, part of the General Motors team way back when…

The Fisher mansion is in disrepair but seems to be under renovation.

…and some smaller homes, also built in the 20s. Most of the homes built during that period burned in a big fire in the early 70s because the bridge to the island hadn’t been built large enough to carry Detroit city fire engines.

A couple of the smaller original homes.

After we circled the island we headed out to the Detroit River.

Headed into some serious paddling now.

The river is a busy shipping channel, connecting the Great Lakes and lets ships get, eventually, to the Atlantic Ocean. We were told to stick together, not go too far out into the river, but stay away from the wall along the shore, where waves would be slapping and bouncing back at us.

Almost immediately we saw a huge freighter coming our way. We were in no danger, but the size differential between it and us was hard to ignore. 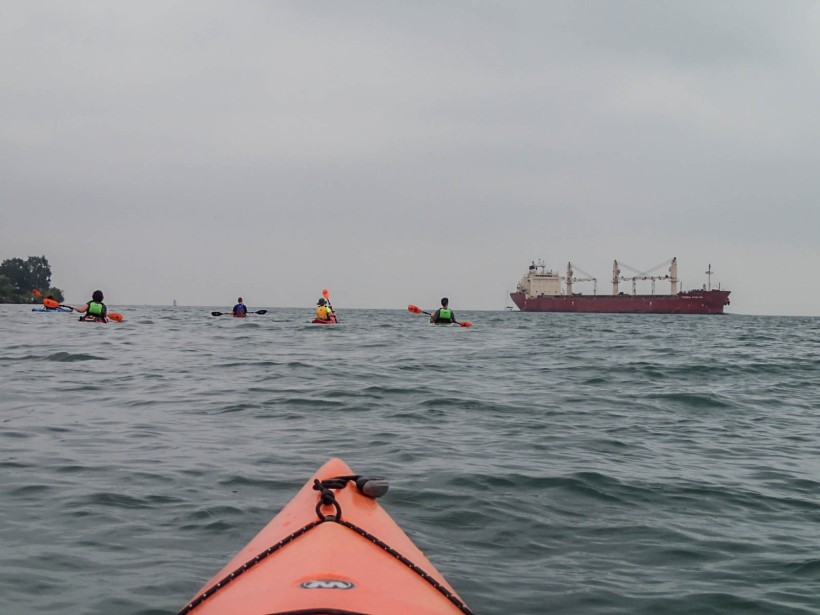 And right behind that ship was another, bigger, deeper more foreboding ship. I knew they’d both be kicking up some serious wake and I was eager to turn off the river back into the safety of a canal.

Another huge ship coming our way.

There was already some serious chop going on and I didn’t really want to ride out any huge waves in my little orange kayak. Soon enough we turned away from the big water and into the relative calm of another canal.

This is much more relaxing!

Turning the next corner we found ourselves in a small community of river homes complete with boat houses. Most of them looked like they’d been around a long time. 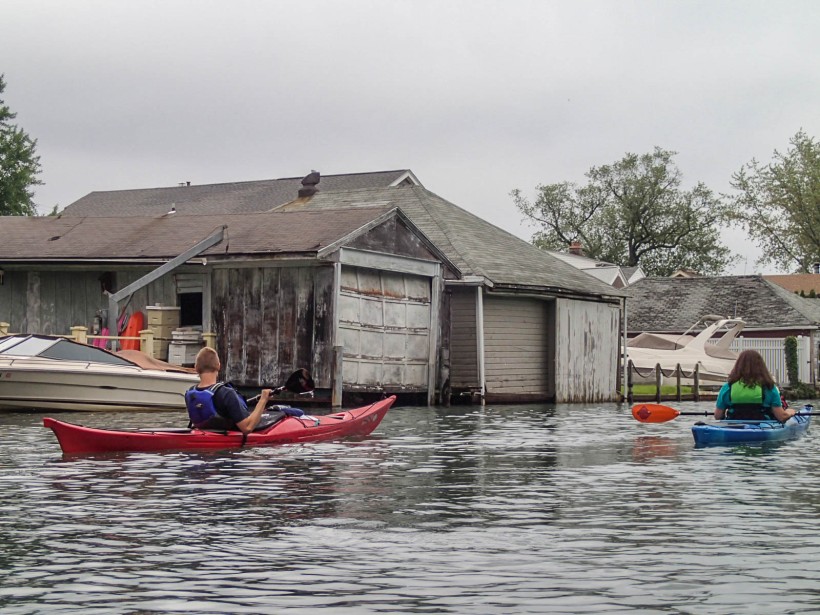 But other boat houses seemed in better repair. And some even held beautiful vintage wooden boats. 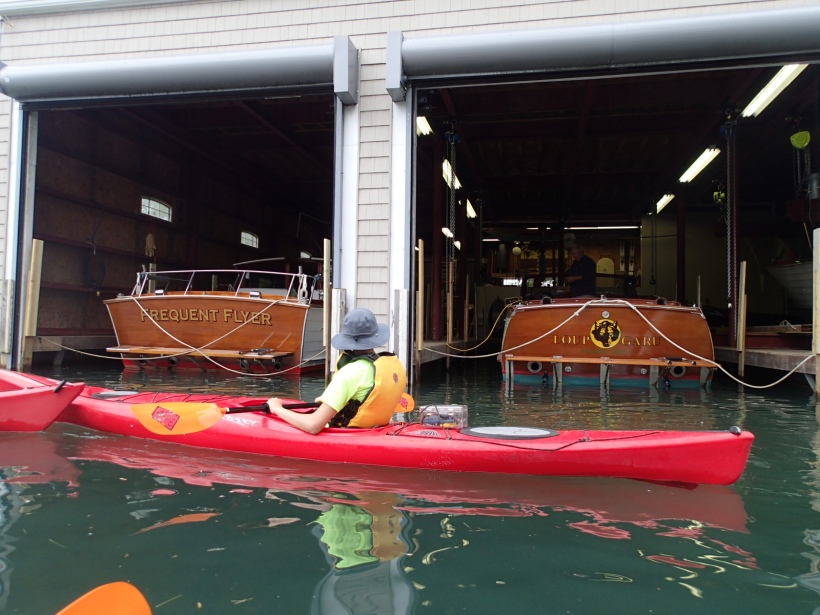 …and then had something of a traffic jam under a bridge.

Some confusion about who has the right of way.

Out the other side of the bridge, around another corner and past more boat houses we headed back toward the big river.

The locals tell us the water is very high this spring.

The sun was beginning to break through the clouds as we entered the Detroit River again. To the east of us the skies were still dark…

Let’s not go toward the storm.

…but to the west of us the sun was shining and the water sparkling. 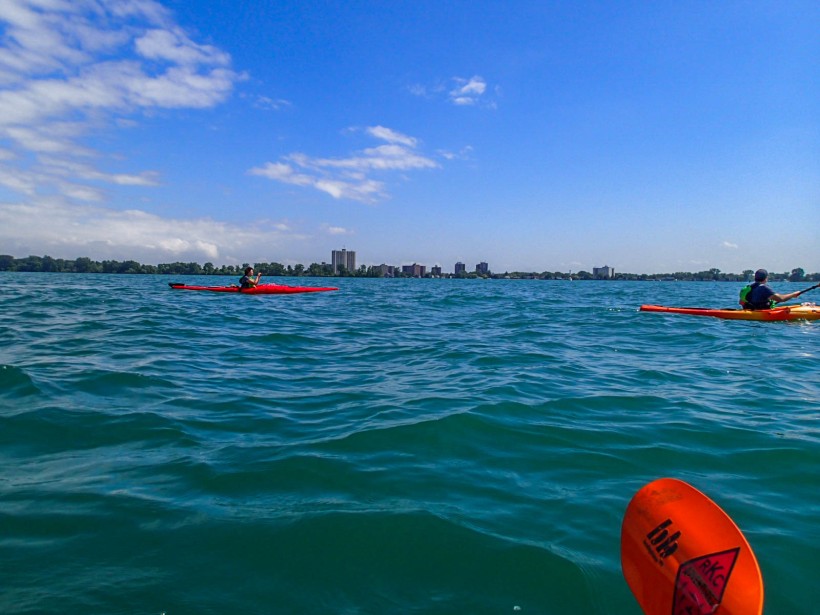 Even the water got more vibrant when the sun came out.

But the wind had picked up and the water was even more choppy than before. There was little time for taking pictures. I had to try, though, because the Detroit skyline was right there and just stunning with big puffy white clouds overhead.

It turned into a beautiful day!

And then, just as everyone was getting tired paddling into the wind we turned one last time into the safety of the canals. 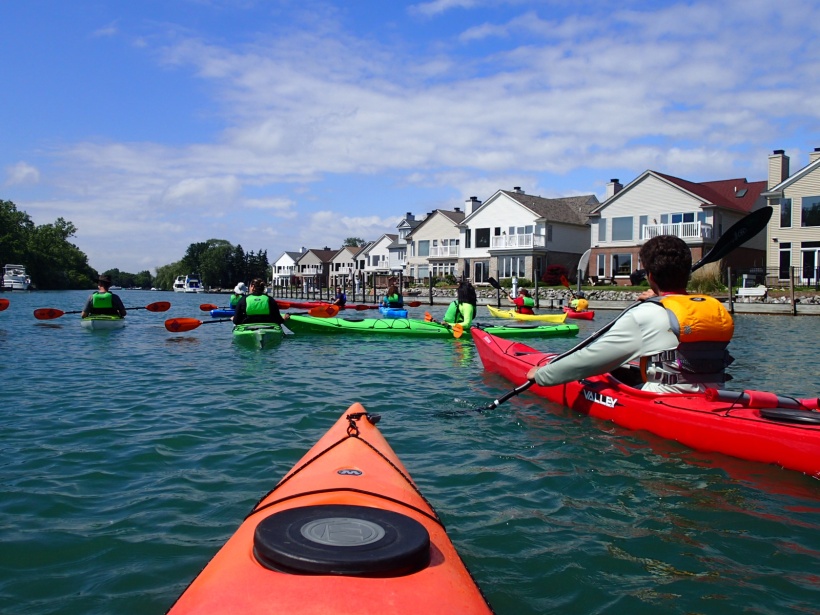 Back where we started, all too soon.

We had a wonderful time. We saw some really interesting houses and boats. We were challenged on the river. And the sun came out at the last minute to make it all look brilliant. 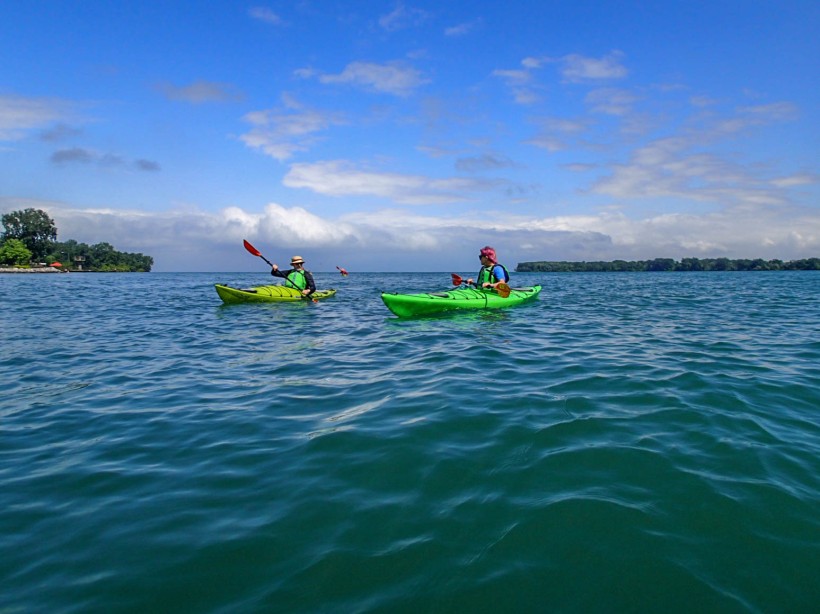 A pop of color on the beautiful water.

I’d do it all again in a heartbeat. I guess you can’t always dismiss those ads on Facebook. Sometimes they turn out to be pretty darn cool.

This one sure did.

24 thoughts on “The canals of Detroit”