After two and a half days of driving Katie and I were content to spend Sunday just watching the lake. There was so much going on in our little corner of the world.

I think the birds are used to having the yard and water to themselves and they went about their busy schedules as if we weren’t watching. We stayed still up by the house and just observed.

The swallow gourds out in the water had huge spiderwebs spun the night before and filled with fishflies. A male bluebird liked to sit up on top and survey his kingdom, and a female bluebird was busy taking fresh bugs into the top left gourd.

The morning sun lit up one of the bird apartments.

When the wind picked up, huge parts of the fly filled spider web fell into the water and fish leaped out of the water to grab the gourmet treat. It was quite a spectacle and one I wish I had captured. You’ll have to imagine it.

Later large blackbirds flew at the remaining webs, grabbing some of the stuck flies for themselves, in between being bombarded by the bluebird couple who apparently thought the bigger birds were attacking their nest. No pictures of that either.

After the bird epic slowed down I decided to kayak up the creek. At the end of our slough is a cyprus forest. It was a quiet paddle, still early morning. 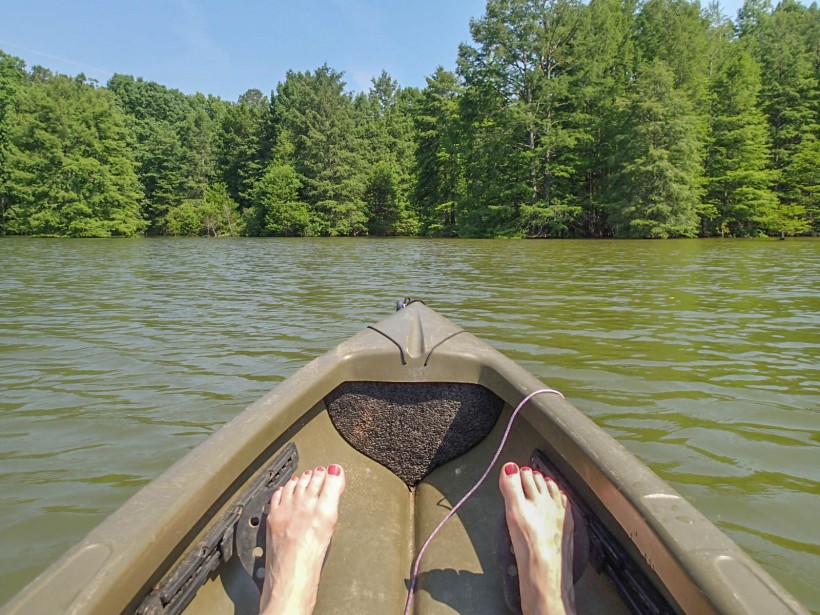 Paddling toward my favorite trees.

I love these trees, and this morning the light was pretty, playing across the texture of their trunks.

The sun on the trunk made pretty patterns.

The water is high here, there has been so much rain, and I could have explored further up the creek. But I thought about snakes hiding up in the trees and turned around.

Kind of spooky back there.

It was good timing anyway, as I was pulling back into our dock the sound of boat engines and people laughing slipped up over the hills. The lake was waking up. I smiled and headed back inside to my girl who was napping happily in the air conditioning. 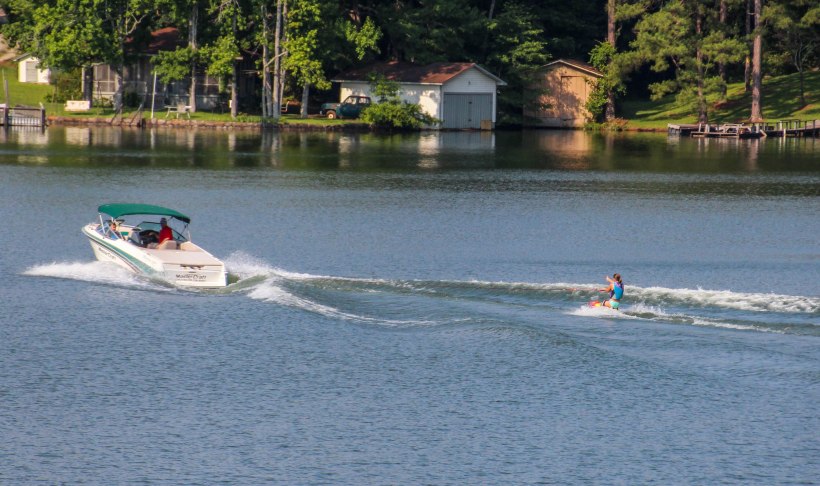 Time for fun in the sun.

Later in the day the clouds settled in, and the wind picked up. Quickly Katie and I gathered up lawn chairs and dragged the kayak into the boat garage.

Clouding up. But still beautiful!

And then the rains hit.

Rain slams across the lake.

And just as quickly the rain blew away and the evening settled down quietly as did Katie and I.

After the rain the lake settles into evening.

Just a typical day on the lake in Alabama. Wonder what tomorrow will bring?