When I left you we were waiting at Regan National airport in Washington DC for our flight to St. Louis Missouri. It was Saturday morning and we had finished ‘working’ and were ready for the weekend.

Our objective was a Sunday afternoon retirement party for a good friend. But since we were arriving on Saturday morning we had most of the day free to explore the city.

So of course we did.

What a beautiful day to explore!

We thought we’d go up in the arch, enjoy the view from way up there. But when we arrived early afternoon there were no tours scheduled.

We were disappointed, of course, but we looked around to see what else there might be to do, and noticed people coming and going from the Old Courthouse. At least that was open! 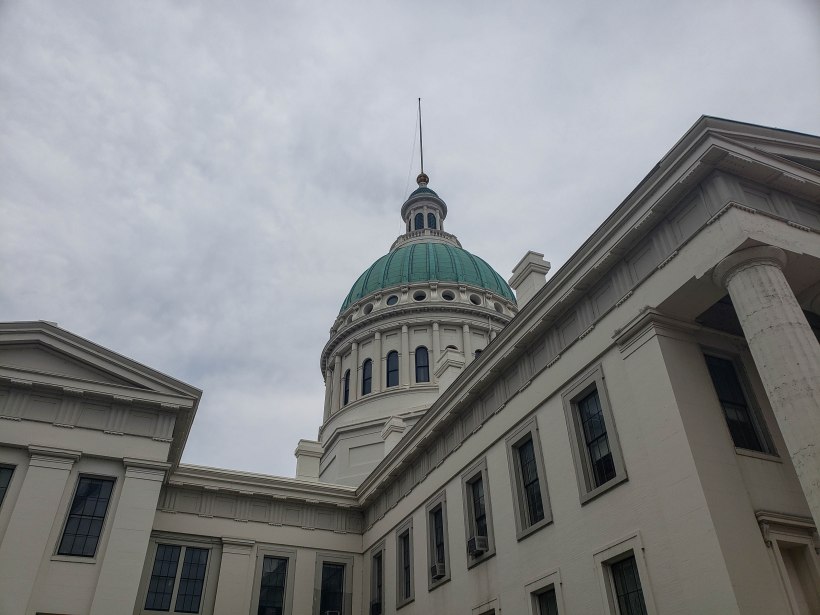 Built in 1828 and then added on and remodeled over the years.

I don’t know what I was expecting when we walked through the door. But all I could say was “wow.”

The colors in the afternoon light were beautiful.

The inside of the dome.

In 1846 the slave Dred Scott sued for his and his wife’s freedom as they had been held as slaves in free states. All of the trials, including a Missouri Supreme Court hearing, were held in the Old Courthouse. The case was ultimately decided by the U.S. Supreme Court in 1857 Dred Scott v. Sandford, which ruled against the Scotts, saying they did not have grounds as citizens to sue.

In 1872 Virginia Minor attempted to vote in a St. Louis election and was arrested. Her trials, including the deliberations before the Missouri Supreme Court, were held in this building. The United States Supreme Court in Minor v. Happersett (1875) upheld the male-only voting rules, as the Constitution did not address voting rules, which were set by the states.

The Old Courthouse was the tallest building in St. Louis and in the state of Missouri until the Union Station was built in 1896. Of course we went to Union Station too. 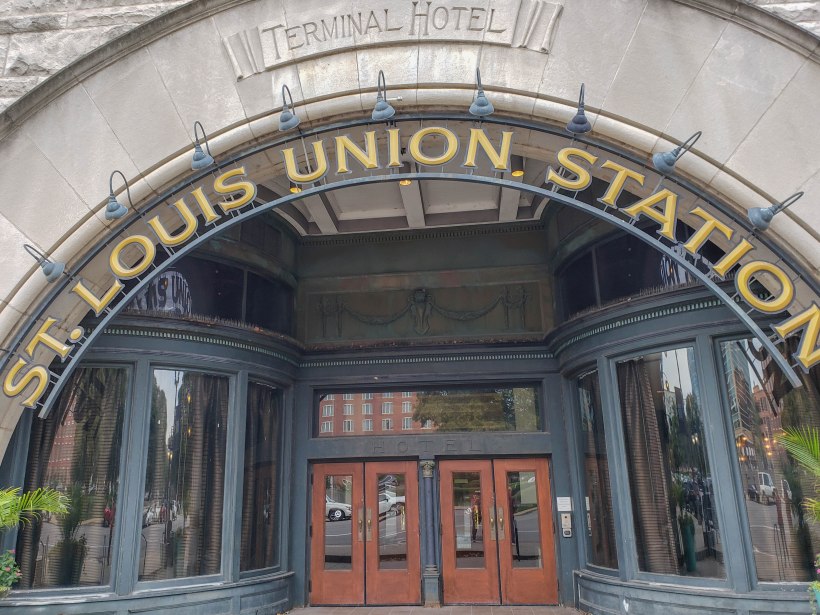 Located many many many blocks away from the riverfront.

Walking through town, on our way to the Union Station we came across a park filled with sculpture. The first piece that caught our attention was a giant Pinocchio…

…but there were lots of other interesting pieces set back in the trees and ponds.

A few blocks beyond the park we finally made it to Union Station. It’s now a hotel, with a large ballroom where the waiting room used to be…

Set for a wedding reception.

..and a big convention hall where trains once stopped.

A great place to run around.

Out back there is a small amusement park with a big wheel and a carousel. When night began to fall we took a ride on the wheel. 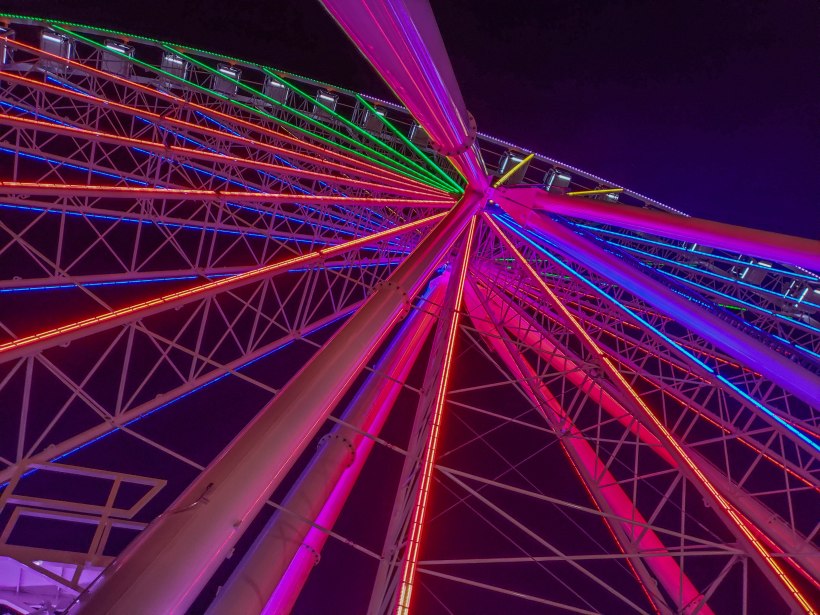 A fine night for a ride.

I wondered what the hotel guests at this old hotel thought about the lights shining in their windows all evening. 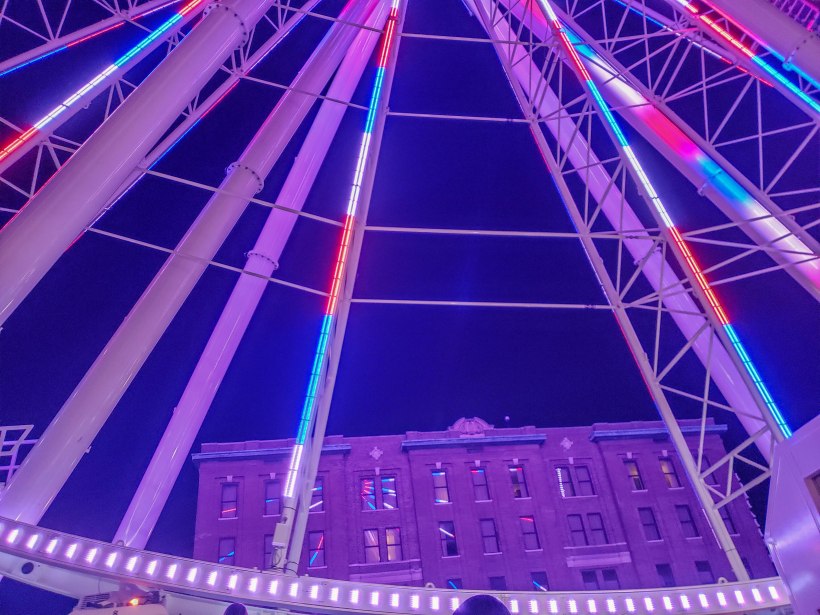 Maybe they’ve got blackout drapes over there.

But of course, when it was all said and done, the arch is the main feature in St. Louis. At least for me. There are so many ways to try to capture it’s image. 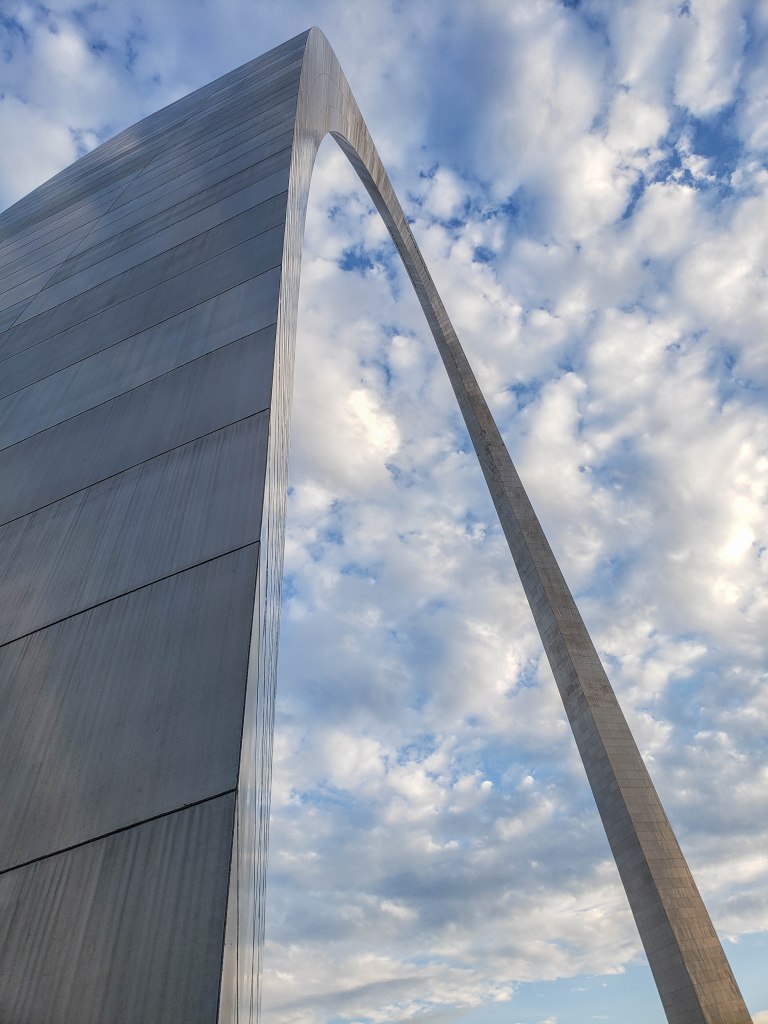 I tried to figure them all out.

Against the soft clouds of the late afternoon sky.

But my favorite was when the sun was almost down and the arch glowed with the last light of day. It looked like silver ribbon, as if someone had brushed it with silver leaf. There was a hint of pink near the top.

Just before night, when everything glows.

I couldn’t stop looking at it as it changed color in the dying light.

And the next morning, on our way out of town, heading north to that retirement party, we stopped on the other side of the Mississippi River, in East St. Louis, Illinois, for one last look.

There’s a park over there, mostly funded by Malcolm Martin. A large ramp has been built so that you can get a clear view of the St. Louis skyline and it’s famous arch. And way up on the top of that ramp sits Mr. Martin himself.

A life size bronze statue of the generous man who, I thought, seemed a bit lonely. So I sat with him for awhile and just gazed out over the river.

Sometimes it’s good to have someone to sit with.

It was a peaceful way to say goodbye, for now, to St. Louis.

The bridge to Illinois.