It’s raining today, a steady rain, soaking into our dry, dusty soil. That’s a good thing and made me smile this morning because I’ve been pulling weeds for days (that’s how I know our soil is dusty) and husband has been hauling mulch around the yard for days too. Rain makes me smile because I don’t have to feel guilty not going out and doing more.

So I’m mostly sitting inside watching traffic go by and working on a set of four or five little paintings that will be headed to Norway.

But before I start those I did this one.

I was weeding yesterday and pulled up an acorn that had sprouted a little oak tree. I thought it was so beautiful, so intricate yet so simple, that I brought it inside and put it in a glass of water so I could study it again. This morning I drew it and then colored it in — I smile every time I look at it.

And then I looked up from smiling at the little oak tree and saw this: 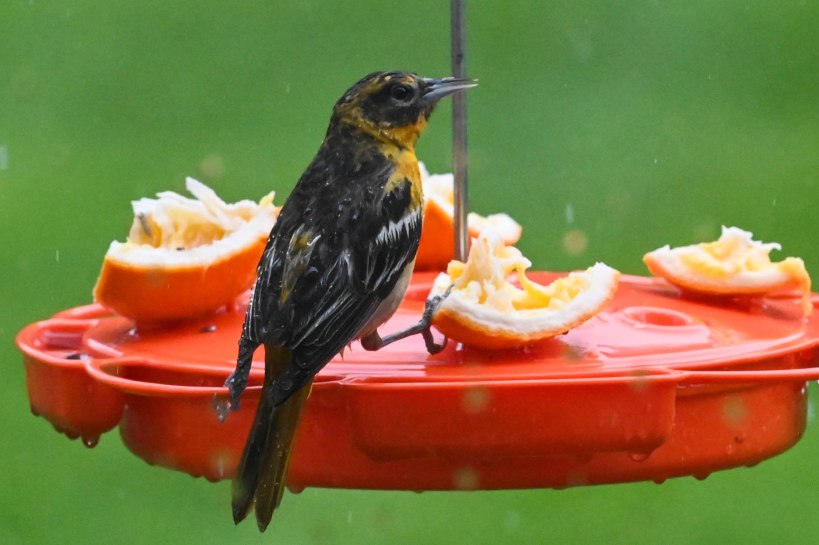 I think it’s the female orchard oriole, though I haven’t seen her before. She was very focused on what’s left of the oranges. Notice her proprietary foot on the fruit.

I took several pictures of her, at at one point the camera was collecting itself after a series of shots and when the shutter opened up again she was gone and in her place was this one:

This is the female baltimore oriole. She too was very focused on the fruit even though I put jelly in the feeder earlier in the day. Notice she’s standing on what’s left of an orange quarter.

And I made a note to self: Females eating in the pouring rain obviously know what’s better for them. They both focused on the bits of fresh fruit and ignored the sugar. Can’t say the same of the males who have spent all day eating jelly. Just saying.

These make me smile too.

32 thoughts on “Just one more smile”