I follow a wildlife group on Facebook. I’ve been seeing pictures of what were identified as Brown Pelicans that people were seeing out at the Shiawassee National Wildlife Refuge which is only a little over an hour from me. Pelicans in Michigan?

Early morning at the refuge.

I’ve been to this refuge once before, about a year ago. I saw lots of pretty things then, but no pelicans. I’ve never heard of pelicans in Michigan and I wanted to see them. 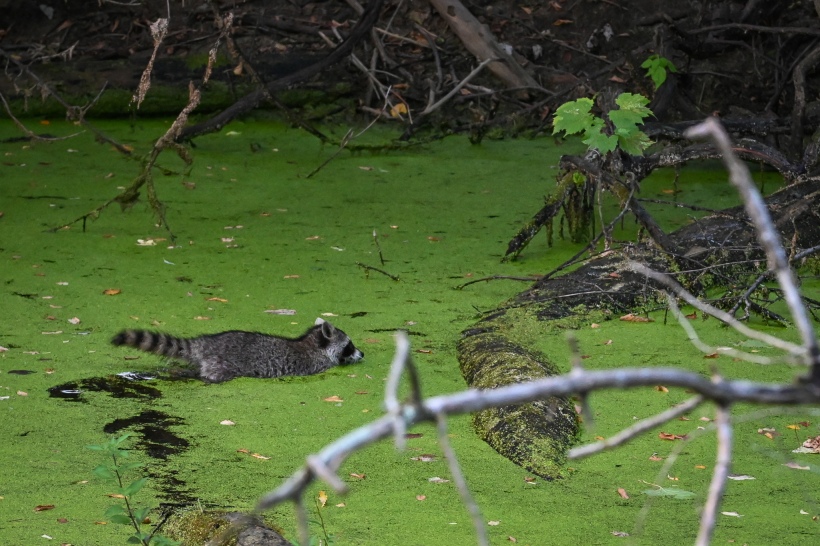 I startled a racoon as it swims over to a log to exit the water.

But life, as it usually does, interfered. I had too many commitments, too many places I needed or wanted to be. I kept putting off my trip up to Saginaw County, but those images of these beautiful birds continued to show up on Facebook. 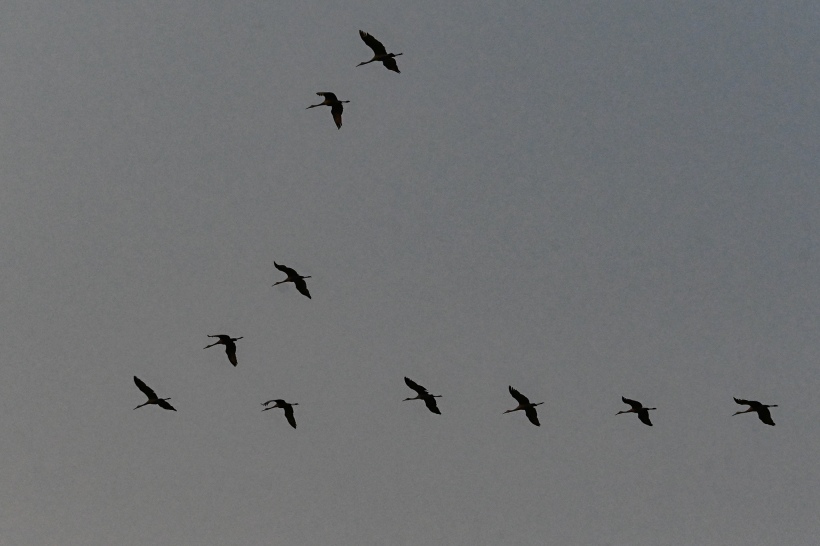 Finally I decided to add a stop at the refuge to a scheduled trip north to my happy place along the shores of Lake Michigan. I figured since I wanted to be at the refuge at sunrise I could spend as much as four hours there and still get up to Northport at a reasonable hour. 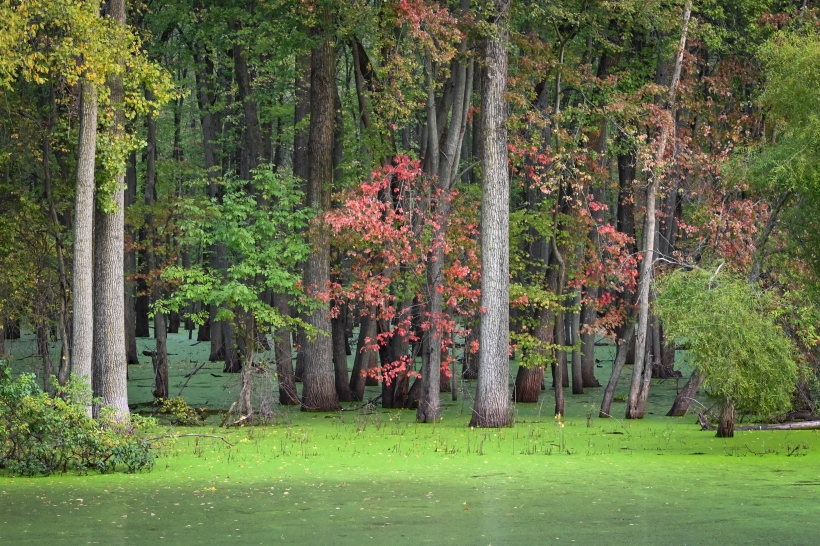 Water on either side of the dike I was walking on.

So one day last week I let Katie get me up at 3:30, put on my waterproof shoes and lightweight hiking pants and headed out the door by 4:30, prepared for a double adventure.

I arrived at the refuge as the sun was coming up. In hindsight I should have arrived even earlier, because it’s a two mile walk back to the wide open wetlands where the pelicans were supposed to be. But I saw plenty of things on my two mile walk, even as the sun crept higher and higher into the sky. 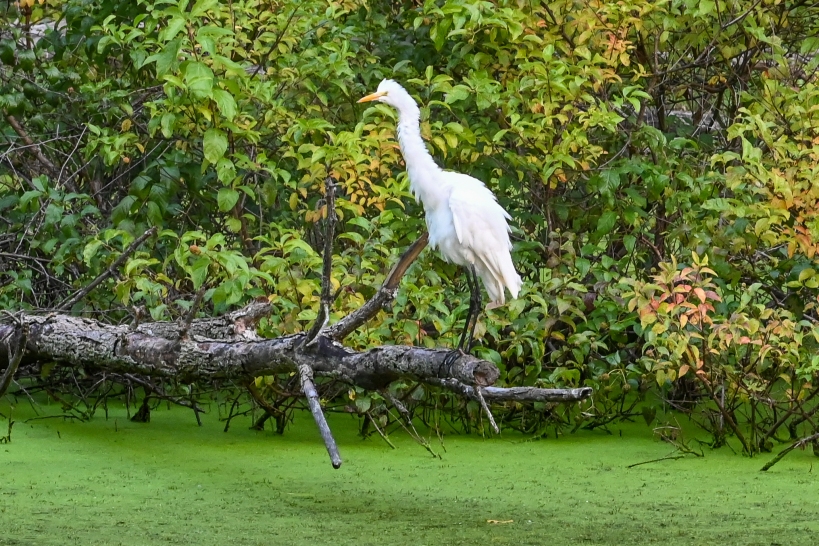 A damp egret watched me walk by.

I crept along as well, because the trail was covered in crushed stone and my heavy, waterproof shoes were so noisy on the rock that every few steps ducks rose up from the water on either side of the dike I was walking on. The noise of their flight up out of the water is startling, even after I heard it a few dozen times.

I frighten a wood duck couple into leaving.

It was hard to get a decent image of anything in the low light, no matter how high I set my ISO. But I had fun trying. 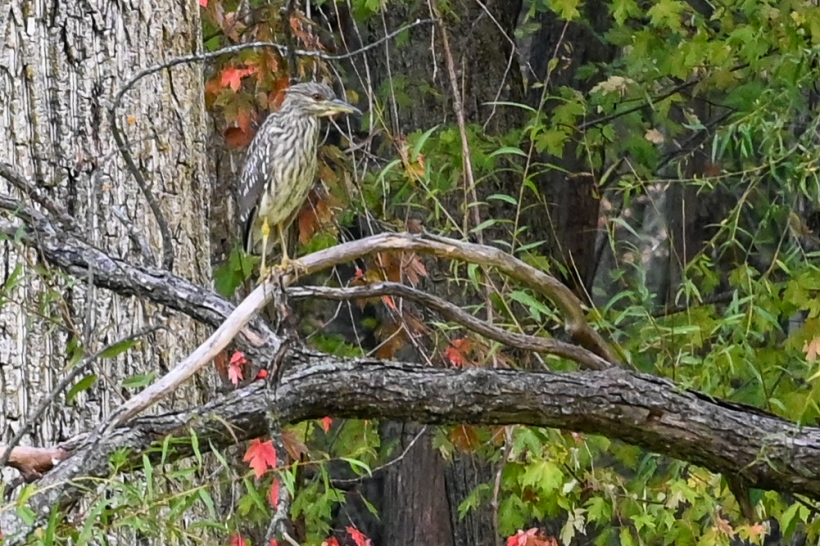 A juvie green heron, just out of focus.

By the time I got out to the open wetlands I was already tired. Such an early start, so many missed images. But then I rounded a curve and saw these guys. They sounded an alarm as I slowly approached them.

“Should we stand our ground or get the heck out of here?”

They were between me and where I needed to be in order to check out potential pelicans. I wanted to get a good picture of them flying, so I stayed prepared with the camera held up to my eyes as I moved forward. Eventually they gave up and rose into the air with great fanfare, warning about my trespassing into their space to anyone else out there that cared. They were absolutely beautiful. 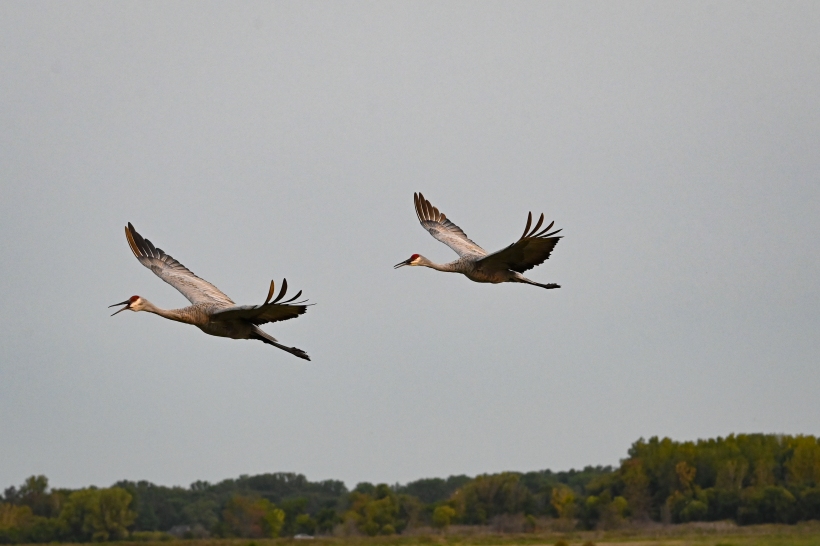 The sun on their wings was so beautiful.

I coldn’t stop shooting as they rose higher and higher.

Once they had flown off over the woods and the sound of their calls had faded I looked around and saw what I thought were some swans preening on a log on the other side of some open water. 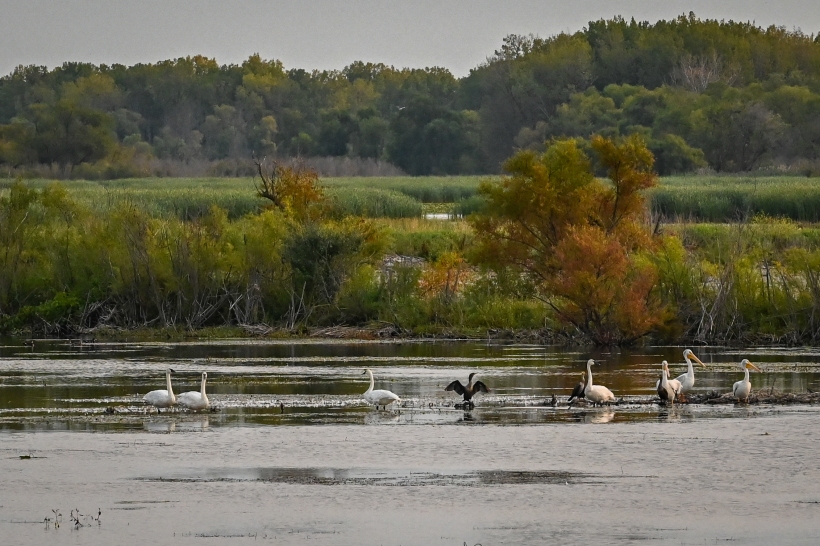 Those are swans over there. Right?

I couldn’t see them very well, even with my long lens because I was shooting into the morning light. I was pretty sure it was a bunch of swans, so I spent some time seeing what else was out there.

Egrets discussing the weather. Or something.

The egrets were beautiful in the morning sun. And everywhere I went something flew out of the water. It was hard to keep up. 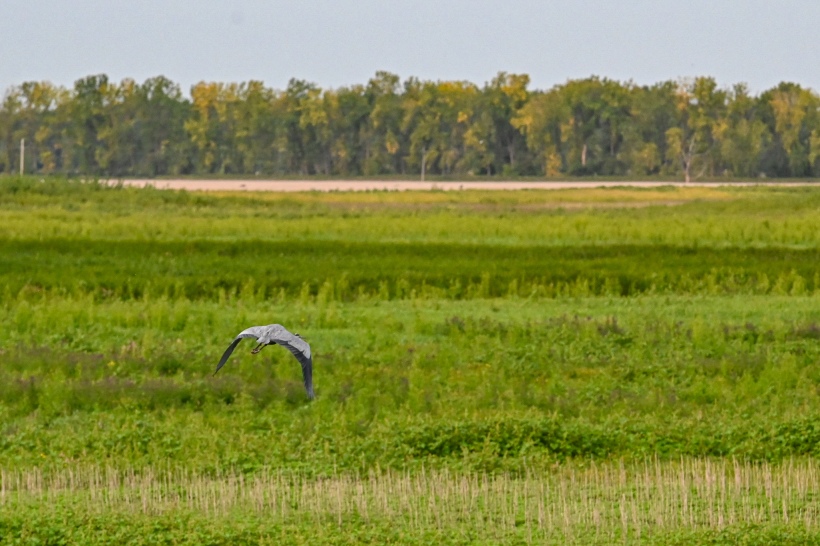 I startled this blue heron too. He left without looking back.

Still, those swans out there called me and I took more pictures. But time was ticking, and how many images did I need of a group of swans? I was getting tired and I was disappointed that I hadn’t seen the pelians. 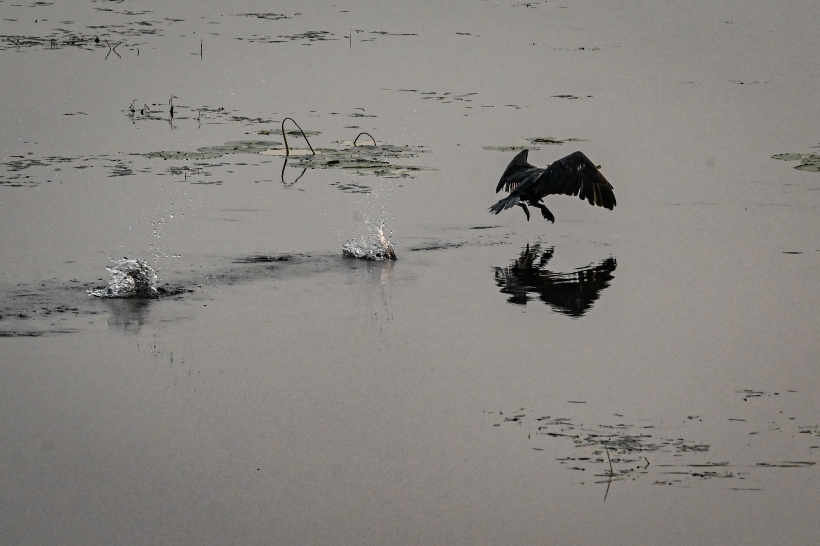 A female wood duck takes off. I seem to be disturbing everyone!

I turned to go, and over my left shoulder three large birds flew by. Three large white birds. Could it be? Yes! They were pelicans! My settings weren’t right for a moving bird, but I got some OK shots.

Then I took some more shots of those ‘swans’ back where I had turned around. Because you know what? There were more and more gathering there. And behind them were hundreds more, out of camera range. Pelicans masquerading as swans.

They call a group of pelicans a ‘pod.’ This pod was getting bigger by the minute.

I looked them up and I think these are not Brown Pelicans, but American White Pelicans. They have big black stripes on the ends of their wings, just like the images in the article. I feel lucky to have seen them.

All those white birds flying in the background are pelicans too!

After spending a long time watching them I turned and began my long walk back to the car. By now the sun was really up and so were all the little birds. Lots of hopping around in the underbrush, chirping, flitting across the path. I only got one of the little ones in a decent shot. 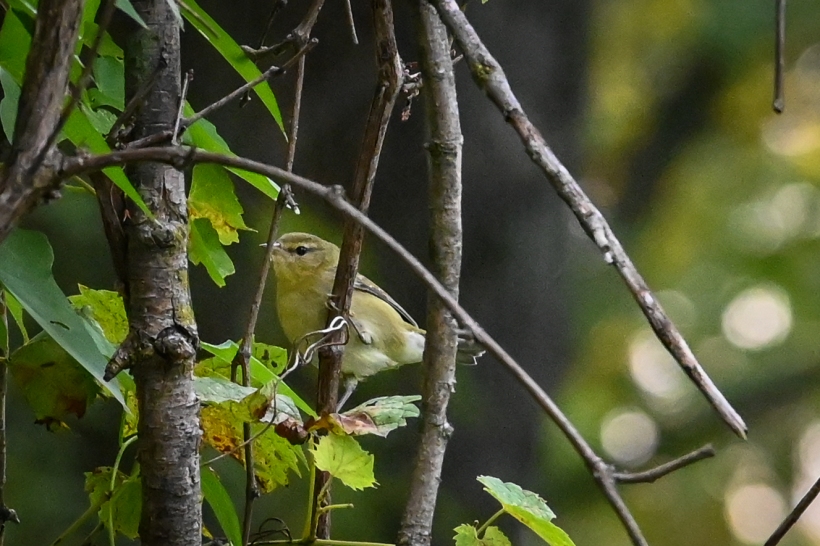 A little round yellow bird. Maybe a warbler?

But I saw several others too, though the images are terrible so I won’t share. I’m just glad to have seen a juvinile rose breasted grosbeak, and a white throated sparrow, who, people say, is only around in winter. Uh oh. Winter?? 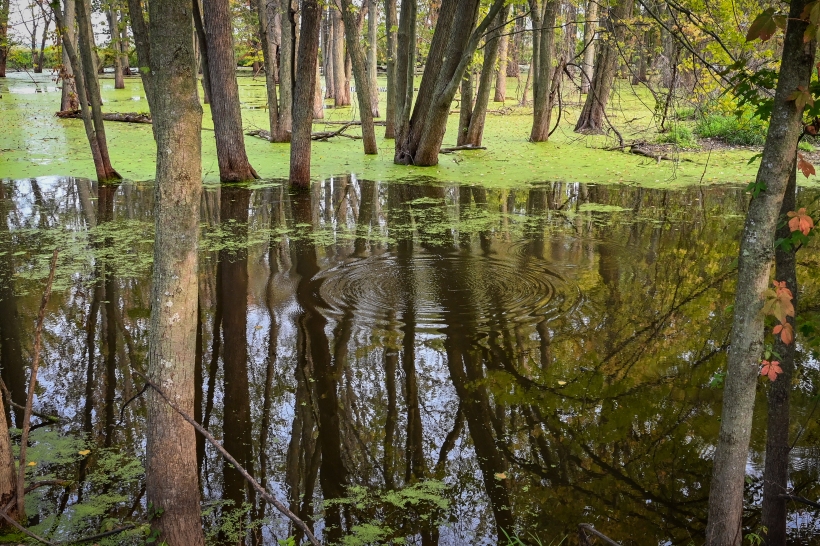 On the way back I concentrated on moving along, but also stopping to notice the flowers still in bloom…

Everything was yellow, green or red.

The maple trees were glowing in the early light.

Four hours later I had walked a little over six miles, my feet hurt, my back hurt but my heart was full. I still had a four hour drive to Northport, but I was headed to my happy place, and had been in a very beautiful refuge. Couldn’t complain, that’s for sure. 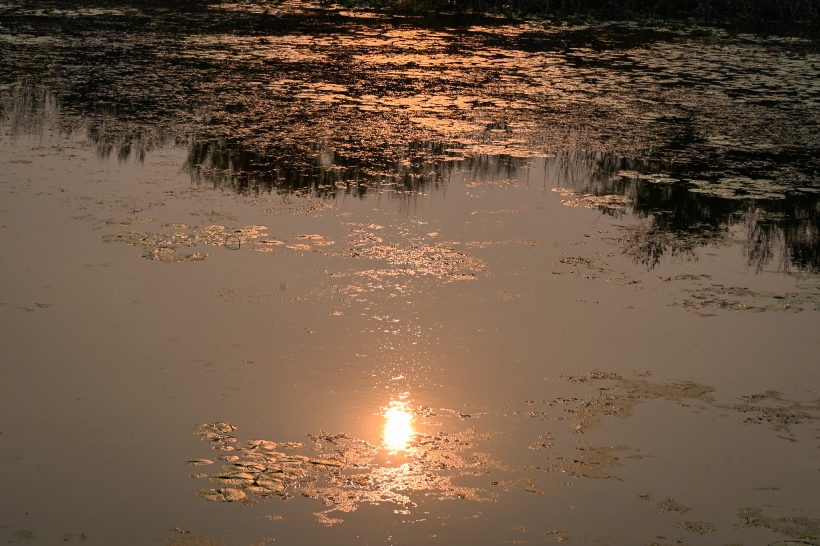 Plus….I had seen hundreds and hundreds of pelicans! And now you have too!

Definitely worth getting up early!

34 thoughts on “A walk through Shiawassee National Wildlife Refuge”