The Senate and the House versions of the Transportation Bill will be going to conference, probably this week. The Senate version allows for 33 foot double trailers to drive across the country. This policy change didn’t come from any safety studies, didn’t have any hearings, and isn’t even anything that most truck companies are requesting. It’s something that a few companies, notably FedEx and UPS, have managed to get attached to an important bill.

The Teamsters representing many drivers, law enforcement, safety advocates, environmental groups, biking organizations and pedestrian groups oppose longer double trailers. Thirty-three foot double trailers will require 22 feet longer to stop, and will require a 6 foot wider radius to make it around a corner. The back trailer won’t track the same as the front trailer when turning.

Here’s part of the email I got tonight from The Truck Safety Coalition:

The House and Senate multi-year transportation reauthorization bills contain several provisions that deteriorate truck safety and many missed chances to improve safety. The process of reconciling these two bills falls to the appointees on the Conference Committee who will be meeting soon.

Prior to Conference, Senators and Representatives may offer instructions to conferees, which must be approved by a majority of the respective chamber. Senator Wicker will be offering a Motion to Instruct [Senate] Conferees to include language that would require the Department of Transportation to study the safety impacts of Double 33s before requiring most states to allow these longer trucks on their roads. It is critical that this vote passes.”

SO…Senator Wicker is going to offer a motion that the DOT study the safety of double 33 foot trailers. It has to be voted on by the Senate. Below is a list of Senators that need to be contacted and asked to vote YES on the Wicker Motion on the multi-year transportation reauthorization bill. If you see one or both of YOUR senators, could you please call them or email them tomorrow (Tuesday) and ask them to vote YES on the Wicker motion?

I’d appreciate it very much.

Here’s more of the email:

“Please take the time to call and email Senators’ offices below, and urge them to vote YES on Senator Wicker’s Motion to Instruct Senate Conferees, which would require the Department of Transportation to study the safety impacts of Double 33s before federally mandating these longer, more dangerous trucks.

*PLEASE DO NOT FORWARD OR COPY & PASTE THE CONTENTS OF THIS EMAIL, please use your own words to make the points.

· DOT recommended no change to truck size and weight due to insufficient data.

Here’s the list of Senators that need to be contacted:

Remember: Urge Senators to Vote YES on Wicker Motion to Instruct Senate Conferees to Require Safety Study of Double 33s in Multi-Year Highway Bill THIS IS THE LAST CHANCE TO DEFEAT DOUBLE 33s! 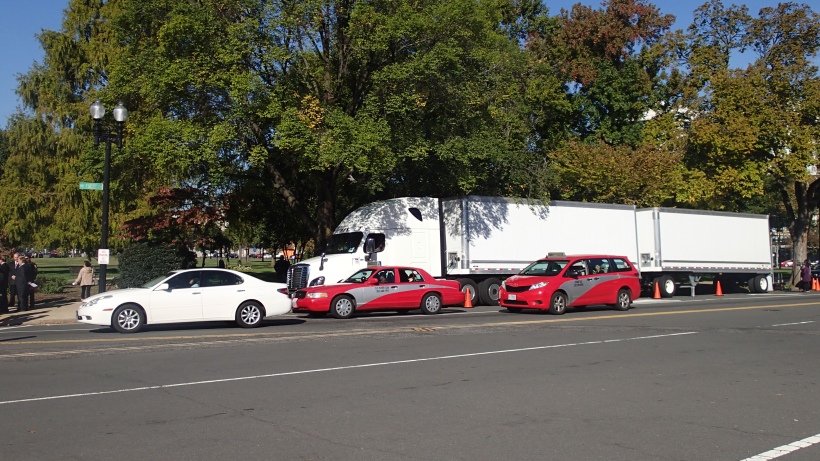 Think about it on the road with your family. Then call you Senator. If your Senator is NOT on the above list, it’s OK for you to call them anyway. They need to know this is important, and that the majority of the American public doesn’t want longer, heavier trucks on our roads.

Help me keep these trailers off our roads.

I appreciate all your efforts. I can’t begin to tell you how much.