I’m giving Katie-girl a couple of days off from blogging. She’s exhausted from all that work and is taking a well deserved break. She requests not to be disturbed.

Some of you are wondering what’s happening with our car which broke down in the mountains of East Tennessee and was towed to a dealership on Saturday afternoon. Katie handled the stress of all that pretty well, though she did throw up in the front passenger seat (which thankfully I had covered by a sheet prior to setting her up there.) while we were waiting on the side of the freeway. I felt like throwing up too, but I had to be the responsible adult.

The upshot is that parts have been ordered and they will begin working on the car tomorrow. They might get done tomorrow late, but most probably won’t be finished till sometime Wednesday.

I’m good with that.

Though it would be nice to be on the road tomorrow, I know we were really lucky that the car quit right next to an exit that has a dealership. And that we got a really nice tow truck operator that took me and the car to that dealership, then took me up the road to a hotel that allows dogs, and waited until he knew I had a room before he left. And I’m lucky that people at the dealership put us ahead of others and began working on it this morning, and then helped me get a rental car, and actually carried stuff from my car to the rental car so that I have enough dog food for Katie during this extended stay.

After we got all that squared away Katie and I took a little tourist trip into the Smokey Mountain National Park, and from there into Gatlinburg. The guy at the dealership recommended we explore Gatlinburg, saying there were lots of places for us to walk. Katie was getting stir crazy hanging out in the hotel room, and we’d already explored the hotel parking lot in minute detail, so I was game for heading out for a mini adventure.

I noted on my Garmin that the Smokey Visitor Center was up the road about 20 miles, so I put that into the system and headed north. After about 30 minutes we arrived at what I presumed would be a national park visitor center. But no. It was the visitor center for a baseball team named the Tennessee Smokies. Right. 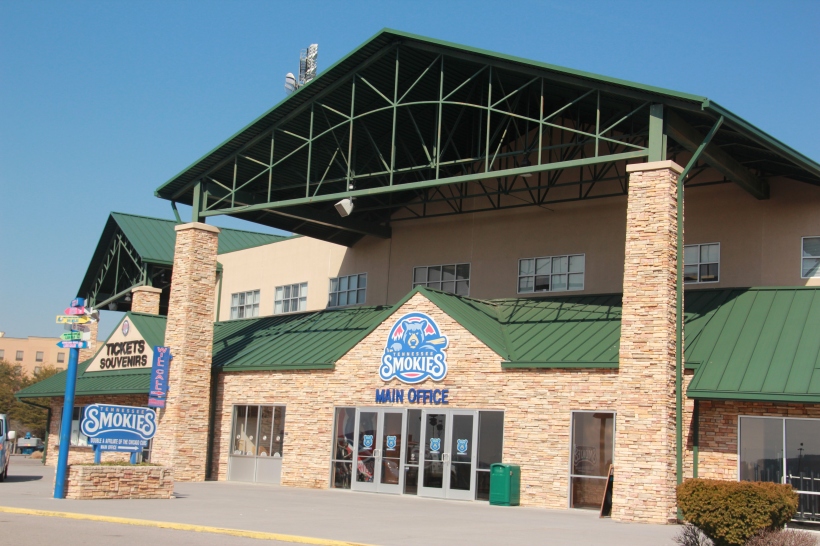 Not the Smokey Mountains. Nope.

So I tried again, typing in Gatlinburg Pigeon Forge, figuring I’d get closer. That got me to the Pigeon Forge airport. No pictures as Katie was beginning to huff at me. And time was getting away from us.

I tried a third time, being more particular and typed in Gatlinburg town. That worked! And along the way we traveled into the Smokey Mountain National Park, which is more of what I was really looking for. The stress in my shoulders loosened up as we entered the woods, driving along a rock rubble filled stream.

Then a sign said we could go to the national park via a Gatlinburg bypass! I was on it! Up the mountain we drove, winding around and around. I was noticing the bright green grass, thinking that Tennessee is way ahead of Michigan in terms of spring. It was so pretty, all that bright green.

And then I realized it was fresh growth because the forest was totally burned! The trees were black, standing in all that green. Just about when I was realizing that we came upon a scenic overlook. Of course we stopped.

And way down below was the village of Gatlinburg, surrounded by charred mountains that were rapidly renewing themselves. It was beautiful in a sad sort of way.

Beautiful and sad all at the same time.

We continued up the mountain, then down the other side to a visitor center inside the park. I ran inside to get a map and saw that Cades Cove was another 25 miles into the park. I would have loved to go there, but it was already 3, and the 25 miles was on a little squiggly road which I knew would take a very long time. I didn’t want to be out there in the dark. I hope to go back and visit sometime. 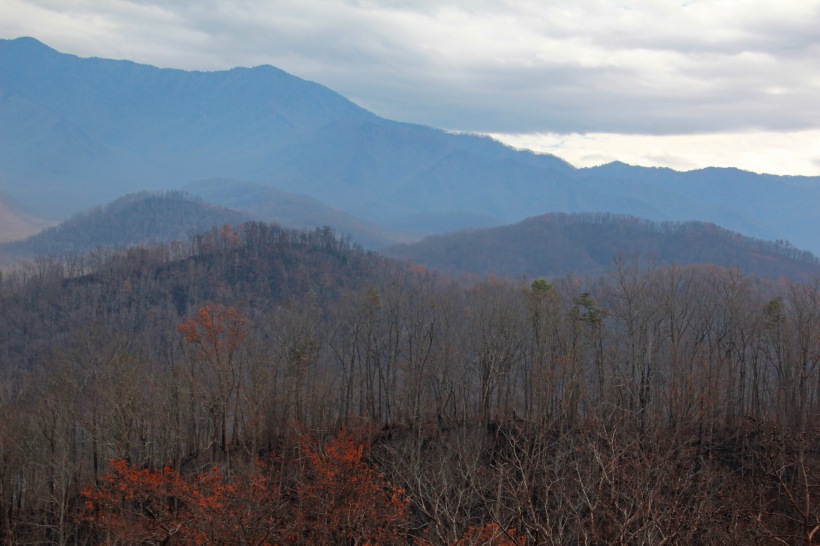 I drove a bit more, looking for a trail where Katie and I could walk a little bit. There was one not too far away, with a place to pull over. I got her out of the car, she huffing at me because all this driving was no adventure in her eyes. We started down the trail and immediately came across this sign.

What do you mean I can’t go down this trail?

Notice one of the “NOT ALLOWED” things are pets. Sigh. We got back in the car. Katie gave me the stink eye. So I figured we’d go into Gatlinburg after all and walk around there.

What a zoo. The town is blocks of restaurants and curio shops. You know what I mean. The kind of place you might want to walk if you weren’t a dog. She stood up in the front seat and watched it all go by, fairly interested and if there had been a free place to park I might have walked a block or so, but I didn’t want to pay for parking when we’d only be there for a few minutes. There’s no way she’d have that much fun on concrete.

See the little house down there?

So we headed back to the hotel. She says this was an epic fail adventure. But I liked the view from the top of the mountain. And I really liked not being in the hotel room for a few hours. She’s zonked out now, so there must have been a bit of adventure in there somewhere for her too. 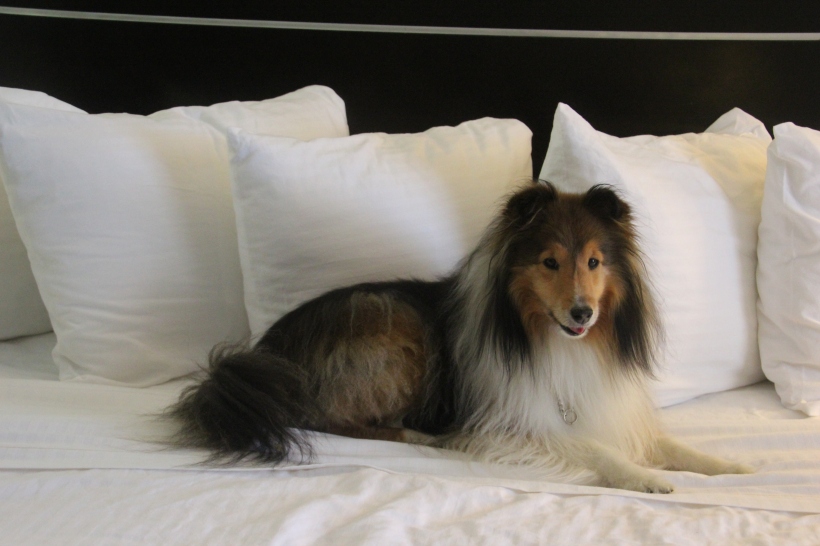 Hey mama! They made the bed while we were gone!

I hope our next post is all about us back on the road. I’m ready to move on. Katie is too.

Mama! Did the fire burn down the rest of this fence?