Today was a big day; I earned my Rally Excellent title! For you guys that don’t compete with your dog and maybe don’t know what Rally is, let me tell you, it’s all about the mama. There’s this big ring, see, and in the ring are all these numbered stations with signs about what mama is supposed to do at each place. I’m just supposed to follow along and do what I’m told. I’m very good at that. Mostly.

You have to have three qualifying runs to get your title, and I’ve had two of the three since December of last year. I don’t know why mama waited all this time to get me entered for my third leg. Oh wait. Mama reminds me that she took me on an awesome vacation down to Florida and Alabama and Tennessee and North Carolina last winter. Right. So maybe she has an excuse for procrastinating.

Anyway, this morning when I got mama up at 4 a.m. she didn’t seem to be as ticked off as usual. Just as tired, but not as irritated. Then about 6:30 she started putting stuff in the car. I asked if I could go and she laughed and said “Of course baby! It’s all about YOU!” So we drove and drove and drove for a thousand million hours. Oh. Mama says I’m always exaggerating. It was only ninety minutes. We got to the venue with an hour to spare which is how I like it. That way I get to sniff around and get comfortable. I work better that way.

But it was still hard for me. It was in a big barn at a fairground. And there were noisy trucks outside that I didn’t like. I wanted to wander over to the people at the table too…I figured they’d have good stuff there, but mama called me back and I trotted right over to her. Then I figured out we were supposed to be working, so I paid attention to my mama.

Which was my mistake. Because apparently mama can’t actually read the signs. So we did a couple of things wrong, and I got marked off. I don’t think that’s fair, do you? Mama messes up and I get marked down? Whatever. The good news is we still got enough points to qualify for a leg, and since it was my third leg I got my Rally Excellent title! And a purple ribbon!

This is my title ribbon!

Isn’t it beautiful? The ribbon…the ribbon is beautiful. I know I’m beautiful, but you’re supposed to be focused on the ribbon. 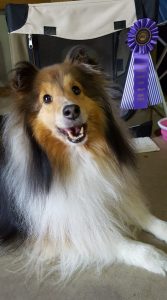 I was pretty excited when I figured out I got my title!

Mama had signed us up for two runs, one in the morning and one in the afternoon. But since we got the title on our first try we stuck around only long enough to watch our friend Peep do a run, and then we left. Mama said she was going to take me to a park. She knew I’d rather be walking in a park than sitting in my crate until the middle of the afternoon. We drove and drove and mama found a park, but when we got to the gate the sign said “NO PETS!” Really? What kind of a park doesn’t allow pets?

Mama was ticked because we’d been following signs for the park for a long time, driving over dirt roads way out into the country. But she got a photo of a cool barn, so she says it was worth it.

Then she found a parking lot on the rails to trails path so we got out and walked a little bit. There wasn’t very much shade though so we didn’t stay long.

This is a boring path mama!

She sneezed and I barked and barked at her. I don’t like it when people sneeze, she should know better. 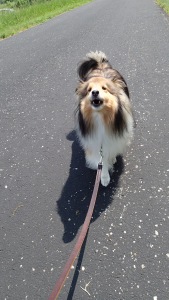 Anyway, I had a pretty good day. Some of it was boring, and we didn’t get to explore anywhere very exciting. I think mama would rather take me camping than to another trial. She says this was my last title so I don’t have to go in a ring anymore unless that’s what I want to do.

Gee, I don’t know mama. Retirement sounds nice, but I did sort of really love that nosework class last year…

24 thoughts on “A title earns a retirement!”