Ok, OK. I’ll show you a couple of my failed night images from last weekend’s trip to Traverse City. My excuses are many, most I blame on the cold wind, rain, and sleet. And fumbling fingers, and bad eyes.

It was a dark and stormy night.

And remember, none of this is the fault of our instructor. She would have gone to the same locations in the same weather and found something much more worthy of your perusal.

The photos here are after I’ve messed with them a bit in Lightroom. I can’t show you the original images because they were shot in RAW and apparently WordPress won’t allow them. They’re probably too big. Or something. Plus when I went back to change the originals into JPEGs in Lightroom they had been replaced with the edited versions and it’s just too much work to go upload the originals and try again. I’ve barely figured out how to get this far.

We started out at the Traverse City marina where the waves were crashing over the end of the pier and the rain was beginning to drive sideways.

That first image up at the top was at the marina. I was pointing at nothing in particular, trying to figure out my camera settings and I accidentally set off the shutter. It turned out very very orange, but the neat thing about shooting in RAW is that when you go to edit it you can change the white balance. So I did. Plus I tweeked a few other things…still, it’s a weird shot and not one I’d normally show you.

The person in the left corner is another of our students, wearing his red headlamp. I liked the reflection in the puddle. That’s about all I liked in this one.

Shortly after that shot I was messing around with the camera, thinking I might get some wave action when a Traverse City Police officer drove up, while my shutter was open, to find out what kind of fool was out in that weather. So this is what I got. 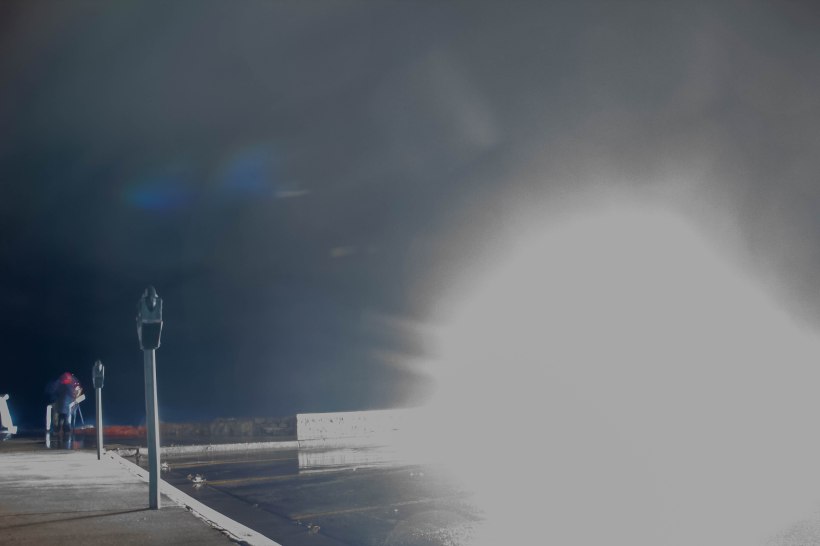 And then there was light.

The original image was completely blown out by white light. So I found it interesting to see that I could push that much light back and still see something. Even though, once again, it wasn’t a shot of anything I really liked.

Still trying to get a shot of the waves crashing over the concrete barrier we tried to use headlights from our own car shining out over the bay. 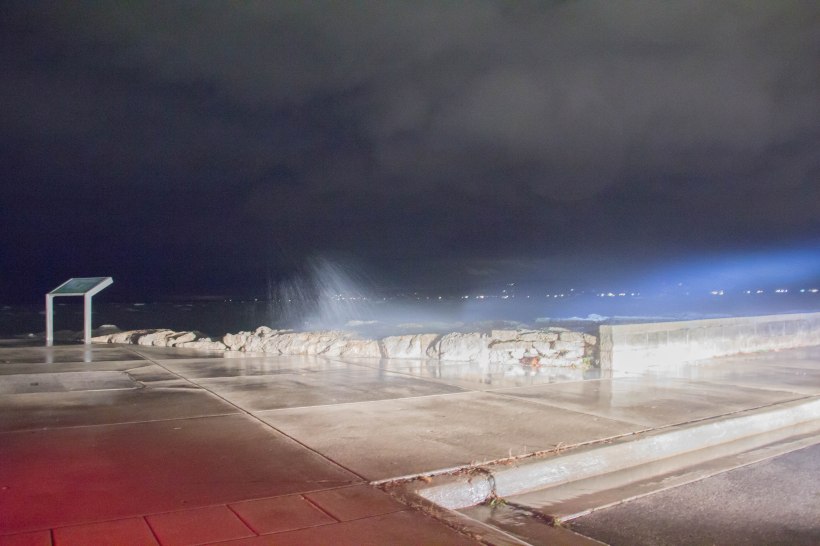 Caught a little bit of a wave.

It didn’t really work, but still, after editing, it kind of tells you how cold and wet it was that night. The only warmth is the red light shining from my neighbor’s headlamp.

After we gave up on the marina we drove way out to a lighthouse. By the time we got there it was snowing wet sleety flakes. And the wind had picked up.

It was difficult to face into the wind coming off the lake and take pictures of the lights of Traverse City to the south. So we focused, out of self preservation, on the unlit lighthouse behind us.

Standing in all kinds of weather.

I set the camera up, choosing 28 seconds of exposure, and someone lit the lighthouse up with a pen light for a moment. It’s called light painting. It’s not perfect, and my lens had drops of water on it. But it was fun.

This image doesn’t begin to convey how cold and windy it was out there that night. By the time we headed back to the car we were all soaked through our many layers of clothes.

But my goodness it was fun!

I want to try again some night when it’s not 28 degrees (-2.22 C) with driving snow. Some night when the stars are out and the air is fresh with spring would be good. I’m already scouting out locations.

And I’m beginning to mess around with Lightroom. Between the instruction I received last weekend, and a book I have I’m starting to make sense of it.

I haven’t found the straightening tool, and I’m having trouble figuring out how to import just one photo instead of the entire folder. And I know there’s oh so much more that I haven’t found yet.

But I’ve started. And that’s the hardest step in any learning process.

18 thoughts on “Playing with the night”