If you’ve been complaining about the unseasonably cold weather, and you don’t like the snow you’ve received so early in the season, well, maybe you should skip this post.

Not so conducive to a picnic.

Because my husband and I are further north than normal. And my goodness there’s a bunch of snow up here.

And it’s cold too.

Hiking to Miners Falls, only half a mile but it felt longer.

Did I mention cold and windy? Perfect for a short trip to Michigan’s Upper Peninsula.

We spent our first night at Mackinaw City, at the tip of Michigan’s lower peninsula, just before the 5 mile long bridge that connects the two parts of our state.

The Mighty Mac bridge that connects the two parts of Michigan.

This morning we took a quick tour around town. Most everything is closed until next spring. It was sort of lonely. And really really cold, just 18 degrees (that’s -7.77 C). 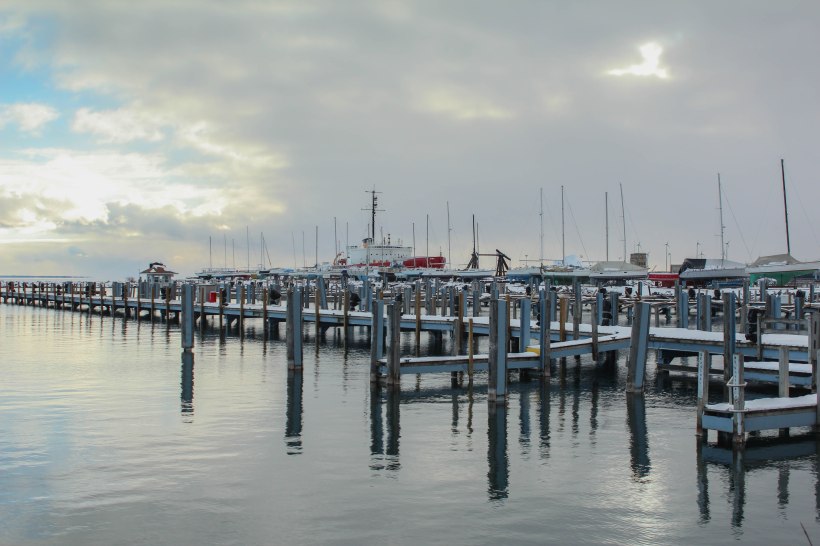 The marina was protected from the wind.

The sky was so interesting, with a row of puffy clouds hanging right above the Straights… 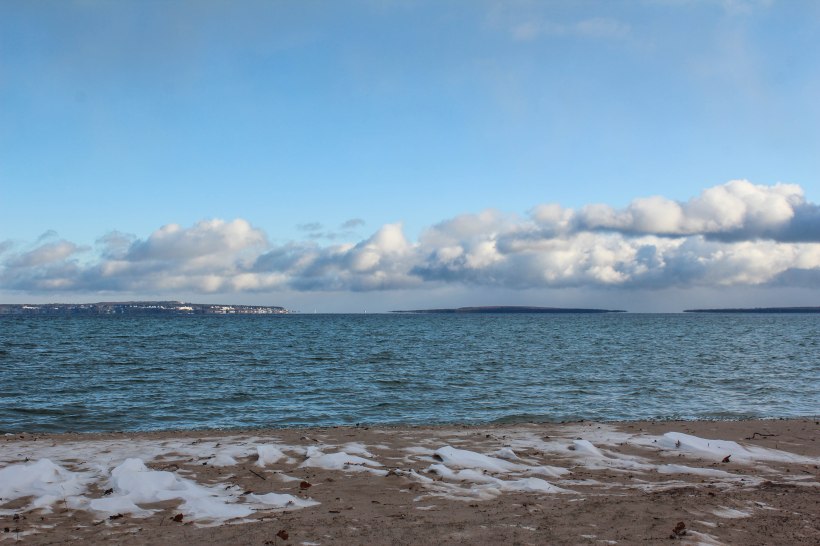 That’s Mackinaw Island over there on the left, a pretty place to visit when it’s warmer.

…but both east and west of where we stood were ominous clouds, some dropping what looked like snow. That didn’t bode well for our drive west. 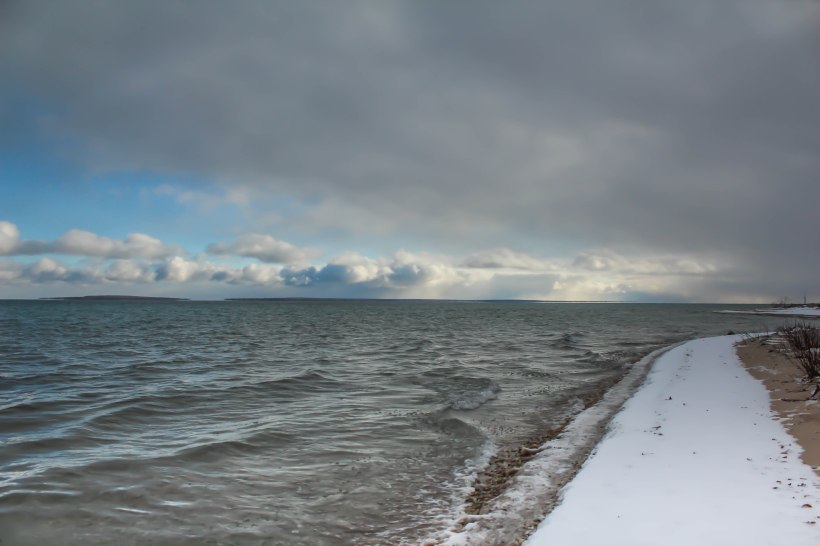 Looks like we’re going to get a little snow.

We headed over the bridge and started the long trek across the Upper Peninsula. We traveled along the shores of Lake Michigan for awhile, then headed north and drove along the shore of Lake Superior. Lots of boring grey skies on both sides of the Peninsula.

So we stopped to take a break in Munising, the home of Pictured Rocks, a beautiful park that celebrates cliffs and waterfalls in this wild part of our state.

Lucky for us there’s a parking lot not 800 feet from Munising Falls located right in town.

A beautiful waterfall and so easy to get to even on a snowy winter day.

Also lucky for us no one else was there so we got to enjoy the beauty of the frozen waterfall all by ourselves.

Then we got brave and decided we’d drive out to Miners Falls, even though we weren’t sure the roads would be plowed. And some of them were not.

But since a few other people had driven on the road beyond the point that the county kept them open, we decided to go for it. I won’t lie, this made me very nervous and I was grateful we didn’t meet anyone going the other way, so we could drive right down the middle of the road in the tracks of the car (or more likely the truck) that had gone before.

I made my husband stop in the middle of the road so I could take this picture.

Once again we saw no one out there. The woods were simply stunning. 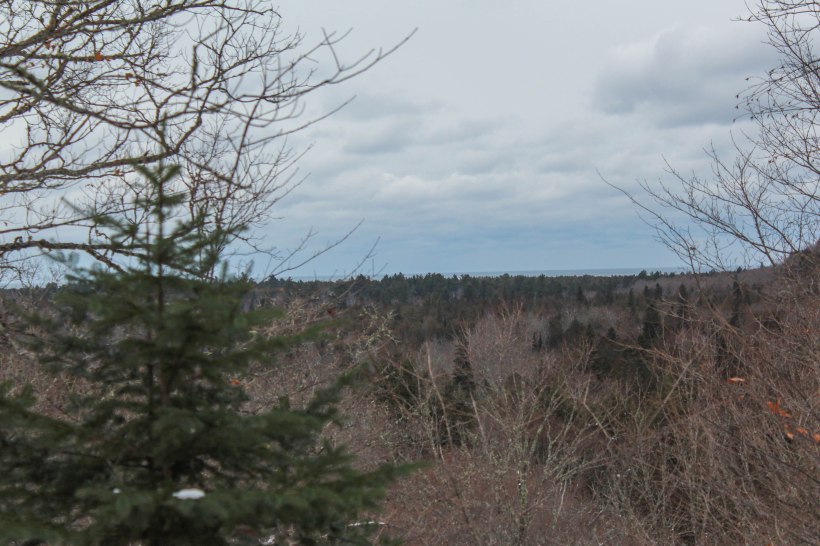 The view out toward Lake Superior.

Out half a mile, then down multiple flights of stairs that hadn’t been cleared. But it was worth it.

Definitely worth it, don’t you think?

Going up was easier than going down.

And then, after getting back to the car a bit tired and wet, instead of heading back to town my husband headed further out on the unmaintained road to go see Miners Castle, a rock formation out at the lake. 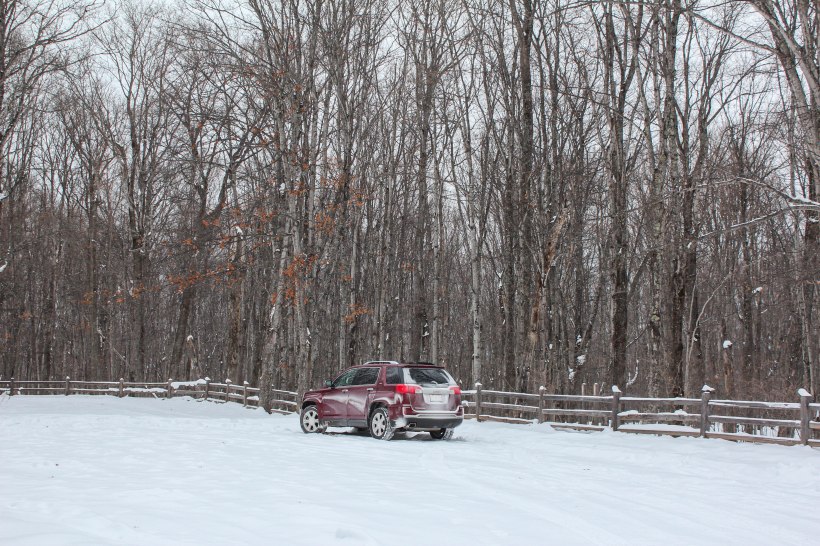 Nope, nobody out there but us.

Granted I had never been there and I had always wanted to see it, but I was stressing that the road wasn’t plowed and no one was out there and I was having flashbacks of being on this exact road in 1979 with a college friend when the water pump in my Chevette died. That was an adventure, and it had been a warm fall day with no snow!

But that’s another story.

Anyway…we got to the Miners Castle visitor center (which was of course closed) and waded through more snow out to the platform to see it. It, too, was beautiful.

Pretty amazing color for what was turning into a colorless afternoon.

And then we walked all the way down through fencing that reminded me of the security at the Atlanta airport, to see the formation from close up.

Have your boarding pass and ID ready please.

It was all fun, though I could no longer feel my toes. But it was beginning to seriously snow, and we had 3 hours to our destination on a good day.

So we headed back toward civilization, and crept over to Houghton, averaging about 40 miles per hour through increasing snow and decreasing visibility. 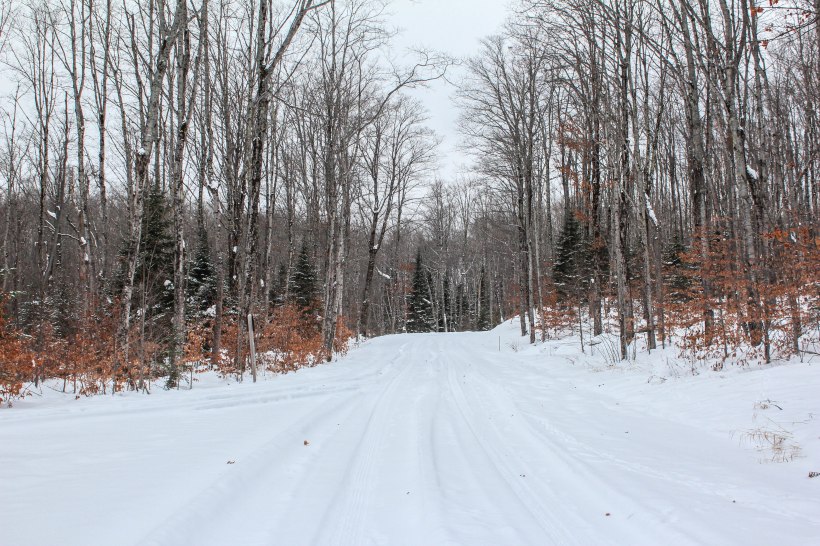 The road back into town.

I just hope all the roads are plowed.

Also hope to not run into any bears!

14 thoughts on “North into snow country”