Saturday a bit of a pain in my back became worse and associated pains in my chest began to bother me. I couldn’t assume any longer that picking up the dog was the problem, so I headed for a local emergency room.

I didn’t really think it was much of anything, figured they’d run some tests, tell me it wasn’t a heart attack, that perhaps I had strained something. I thought they’d send me on my way after a few hours.

Instead they admitted me for observation.

Far from home and my own doctor, in a town near our lake house and with no family nearby, I began to stress. Katie was home alone and I was stuck in an ER, about to be wheeled upstairs to a hospital.

I called one of my neighbors who sprang into action, checking on Katie and arranging for her to have a sleep over with them and their dog Dixey. Katie enjoyed her sleep away from home with one of her best doggy friends.

Mama, on the other hand, got no sleep at all.

I’d had an EKG, a chest xray and blood drawn down in Emergency. They did more blood drawing upstairs, hooked me up to a heart monitor and left me alone for awhile with instructions not to get out of bed.

Eventually a doctor showed up and asked all the same questions they’d asked downstairs, but in more detail. She asked how my parents had died and I explained about my mom. She asked about dad and I told her the short version of dad’s truck crash death. She got quiet.

Then she said 4 years ago her daughter and her ex-husband and his girlfriend were in a bad crash. The girlfriend died, and her daughter sustained a traumatic brain injury. She showed me her 10 year old daughter’s picture, attached to the back of her hospital ID. We talked about the long road ahead of a brain injury patient. We looked each other in the eyes as we both spoke of our fear of being on the road these days. Then she said – “Do you hear that cricket?” I did. She investigated my bathroom, and said she thought it was in the shower drain. I said there could be worse things in a shower drain and we laughed and she left.

Around 10:30 I asked if the big light above my head could be turned off so that I could get some sleep. An aide came and turned off the light and I tried to settle down. Minutes later a LP showed up to take my vitals. Blood pressure, temp, heart rate. Did I need anything? No…just some sleep. She asked if I wanted her to take away the dinner tray which contained a pile of unknown shredded meat and a completely round scoop of white supposed to be mashed potatoes. 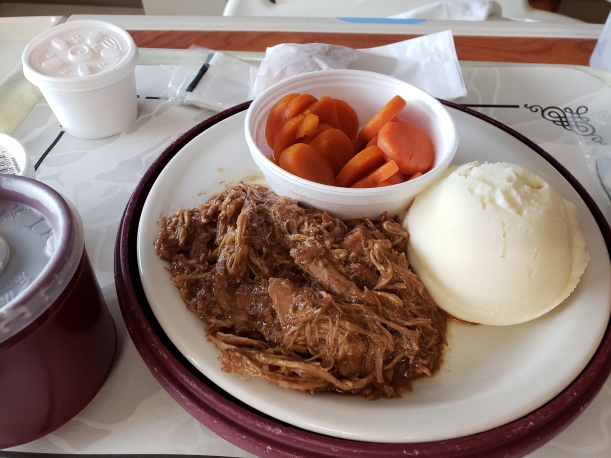 I said please do, adding that I ate the carrots. She said she’d note that and added that when she gave birth to her daughter at this hospital the food was so terrible that her mother-in-law brought her three meals a day from outside. We laughed

Someone came in for more blood. She said she was called the vampire ad said I had nice veins. We laughed. Then she asked if I had a cricket in the room? I said yes, she was keeping me company.

Sleep was elusive as I worried what all this meant.

Just after midnight the RN came in to check on me. We talked about shelties, her mom used to raise them. We talked about how smart they were. I said I was looking forward to sleeping past 4 a.m. because my sheltie was having a sleepover at the neighbors.

Twenty minutes later someone was in to do vitals again. My back continued to ache, the chest too. I couldn’t get comfortable in the narrow bed, wired to the heart monitor. I was worried about my dog. Feeling lonely.

I listened to the cricket singing in the bathroom and wished I was back at the lake.

12:30 a.m., maybe 1, a young man showed up for yet more blood. He turned on the bright light, but that was OK, I was still awake. He asked if I was from Alex City, I said no, I was from Michigan. He said, “Oh, you’re my mom’s age so I thought maybe you knew her.” He couldn’t get any blood the first two times he tried….he apologized for the bruise I was going to have. Then he tried my hand and got barely enough. I said that was the third blood draw, and I’d been told there would be three as they tested for enzymes indicating a heart attack. He said he was sorry, but he’d be back for more around 3:30 or 4.

I settled back to try to sleep. The cricket continued to sing. The RN came in to see how I was. Not so good. She went and got a nitro patch for my chest pain. A side effect, she said, was headache. Twenty minutes later my head was throbbing so bad that it hurt to touch the pillow.

I rang the bell for help.

The RN returned, listened to my complaint and said she’d see if she could give me a Tylenol for the headache. The night shift doctor showed up and asked me more questions, then prescribed an extra strength ibuprofen to be administered through my IV. The RN brought that in about 2 a.m.

I curled up and fell into a deep sleep which lasted until almost 3:30. I was so disappointed when I woke, the sleep had been so warm and good. I tried to will myself back to sleep. But the blood guy was taping on my door. So I gave him more blood and we discussed why they needed so much, and why there was a cricket singing in my bathroom. I said the cricket was now my friend, and we laughed. Ten minutes later he was done and I curled back up again, attempting sleep.

It wasn’t two more minutes when someone else was knocking on the door and wheeling in another cart. She was a perky lady, dressed in pink who sing-songed her “Good Morning!” brightly to me. I grunted and glared at her. She was here to do another EKG; this one would be my ticket out of the hospital if it was good, so I didn’t want to be rude and send her away. But seriously? Who thinks that 3:45 a.m. is a good time to do an EKG? She said she had 5 of them to do that morning and I was the first one.

I asked her if she tag-teamed the blood guy and knew that I was already awake, and she said, “Oh no dear, I have to cover this whole hospital, I can’t be following him around.” And then she said “Hey…do you hear a cricket?”

Once she had her test done and had merrily danced away the young woman doing vitals, who hated the hospital food, arrived to take my blood pressure and temp again. Now near the end of her shift she was much less talkative, but she did mention that she heard a cricket.

Later the RN checked in on me asking how I was feeling. I said the back and chest pain were gone and the headache had been reduced to a more manageable pain. Mostly due to lack of sleep. She said she’d leave me alone. It was almost 5:00. Light was beginning to seep through the fog outside my window.

I gave up and turned on the TV to watch the news. 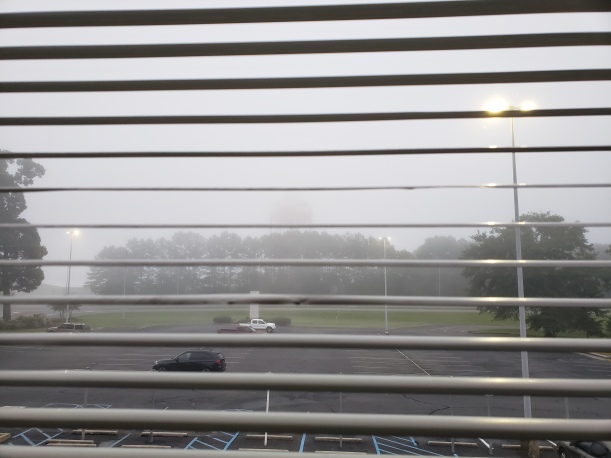 Looks like a good day to get some answers.

My friend the cricket wasn’t singing anymore. I guess her work keeping me company was done and she was settling in to get a good day’s sleep. I wished her well. Because I now knew something she probably already knew. There’s no sleeping if you’re spending the night at a hospital.

And what caused all that pain? We don’t know. I didn’t have a heart attack, but there are many questions left unanswered. There are probably questions I don’t even know to ask yet. But I will. I’m headed north to see my doctor, and I’m packing all those test results with me.

I hate leaving the lake, but it will be here for me when I return. And I’m grateful to wonderful neighbors on both sides of us that took care of me and my dog when I needed help. That’s the South for you. Even in the hospital people shared their lives and laughed with me. Every one of them cared about me and each was concerned that I was away from home.

I appreciate them all. Especially my best friend the singing cricket in the drain. I hope she’s comforting whoever is in that room tonight.