This guy, on the street in Little Italy in New York City was so busy working at making his cigars for sale that he didn’t notice me snapping a picture 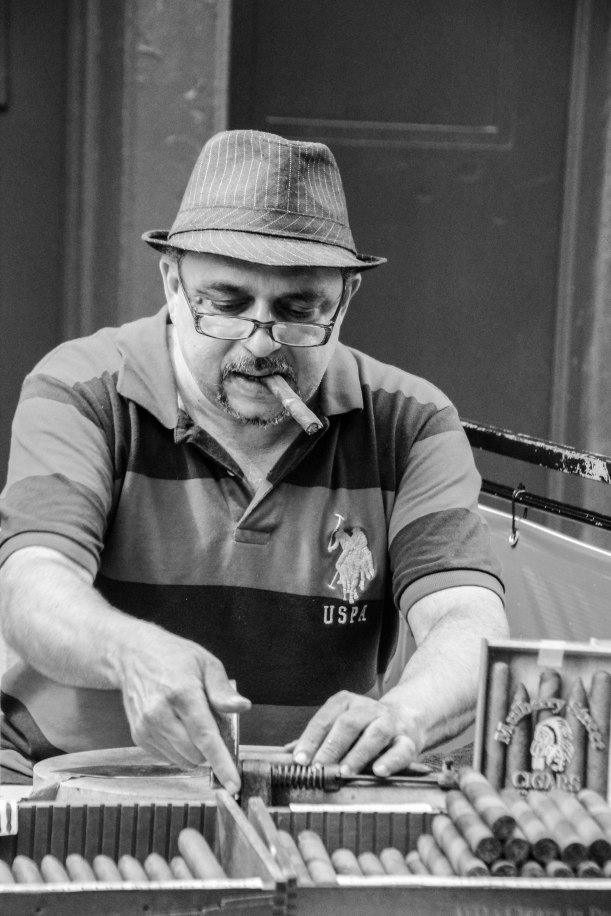 Hard at work while enjoying his own cigar. 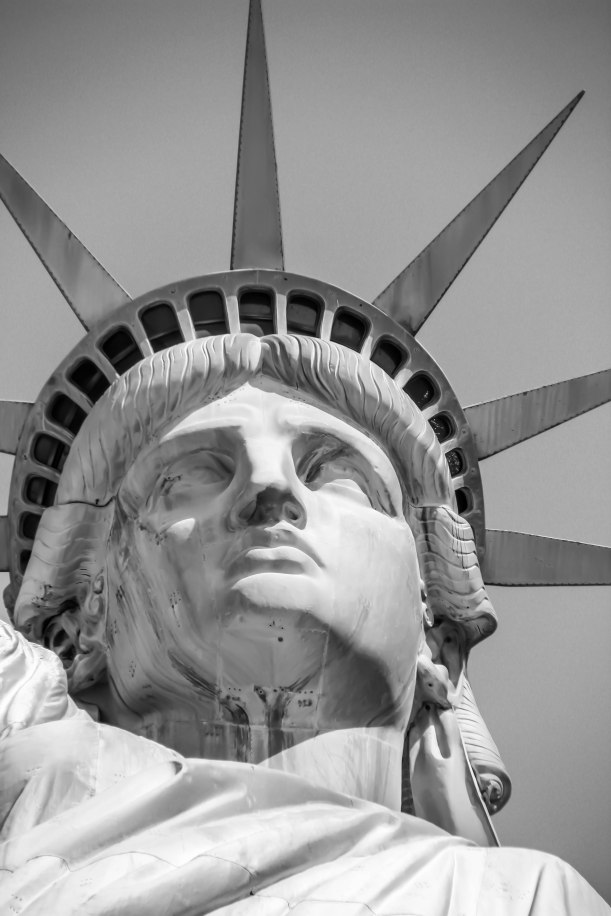 New York City is one of my (many) favorite places, and Lady Liberty’s facial expression reminds me how strong we all are. 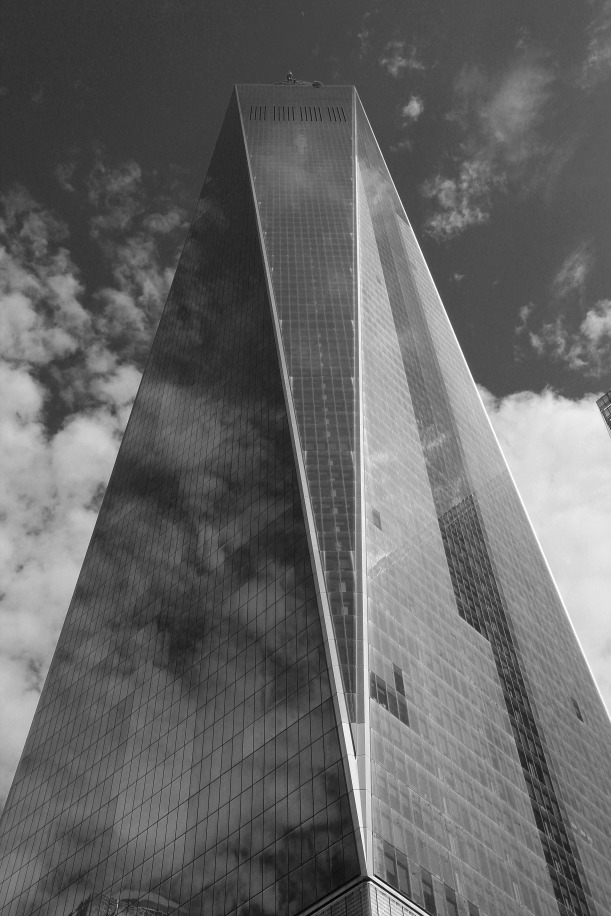 An amazing building, on a beautiful summer day. 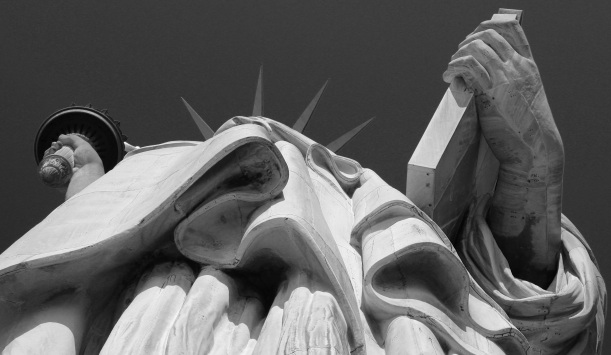 Our Lady Liberty, from our trip last summer to NYC. She’s the biggest sculpture I’ve ever stood next to.

New York City can be pretty chaotic. It’s a city that can chew you up and spit you out, and by the end of my ten day stay last July I was exhausted.

Near the end of our visit we rode the Staten Island Ferry over to the island and back. It was a relaxing trip, and I expected to get some nice night shots of the city.

But the vibration from the huge engine deep within the ship caused everything on board to vibrate too. Including me and my camera. So versions of this is what I got. 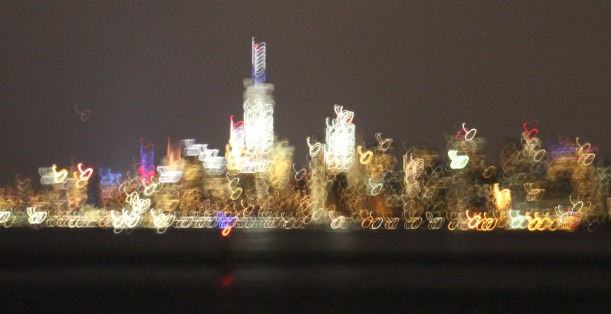 I was disappointed, but didn’t delete all the blurry images. Some of them were kind of cool and I figured I’d find a use for them. And even if I didn’t, looking at these reminds me of the boat trip across the warm night water, of the floor vibrating beneath my feet, the rails shaking under my hand, the lights shimmering along the shore.

And I think this particular shot provides a beautiful and impressionistic image of the chaos that is New York City.

It’s early in this challenge, but here are a few of my favorite chaos entries so far.

You have time to play along, this challenge continues until next Friday. Look around. I bet each one of you has a bit of chaos in your life! Show it to us, it might reduce it to fun for a moment.

And that’s worth a lot. 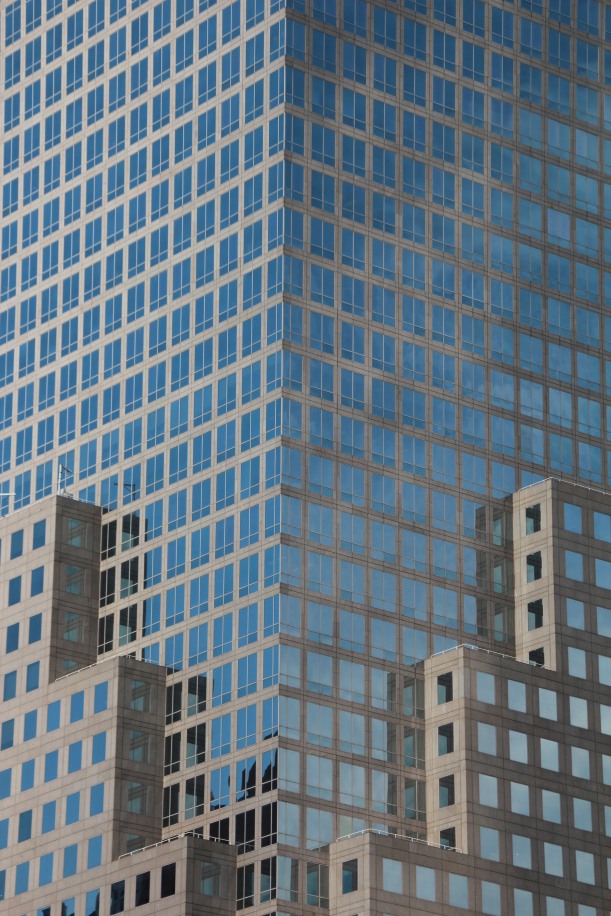 When we were in New York City this past July I took plenty of pictures of the edges of tall buildings.

I liked this one best.

I don’t have a perfect representation of the people that inhabit or visit NYC. These are only those the images I felt I could get away with undetected. Except for the girls in Little Italy that posed for me while I was trying to get a street scene. We laughed about it after, how the street was better looking with them in it. Which was true.

NYC is filled with such facinating people. I wish I was braver and could walk up to those interesting faces and ask if I could take their picture. Maybe I’ll grow into that someday.

Each of the images in this slideshow has a story. I could tell you what they were…but it’s probably more fun if you make up some stories on your own. 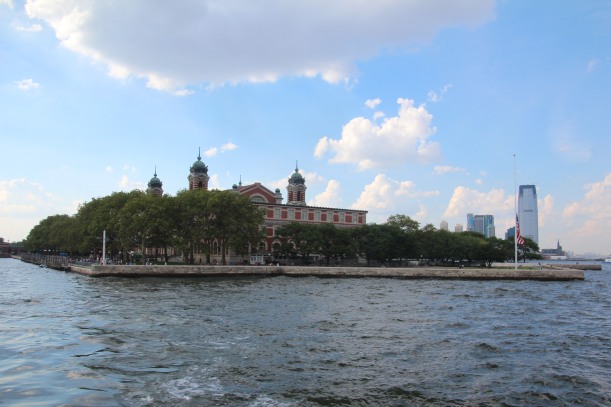 Ellis Island is waiting for you.

The best advice I can give you about visiting Ellis Island is to give yourself a lot of time because there’s so much to see. Take it slow and let all that history sink in. And try to take a ranger guided tour. (Check for times at the information center inside the building.) 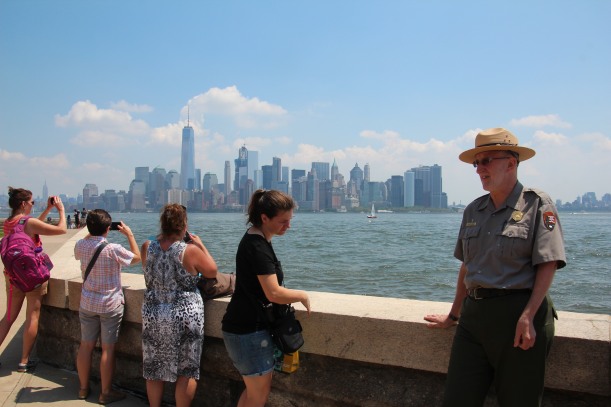 Telling us the story.

In a short half hour guided tour you’ll get a great base of knowledge which will help you understand all the rest. Our ranger used the story of a sixteen year old girl’s experience as she traveled across the ocean and through the system at Ellis Island. 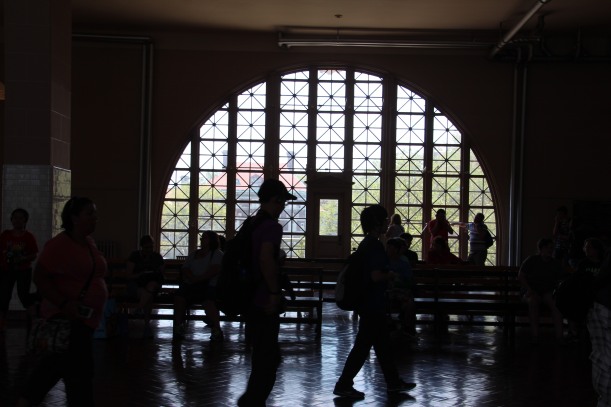 Did you know that only the third class and steerage passengers had to go through Ellis Island? I didn’t either. First and second class passengers got the run of the ship, and were able to begin their new lives here in America as soon as they arrived. Those who only paid about $300 (in current dollars) for their passage were brought to the island to be inspected.

The luggage was left in the luggage room and they were sent upstairs to wait. As they climbed the stairs they were observed. If they appeared sick people at the top of the stairs marked their coats with chalk. Those people were examined more carefully. 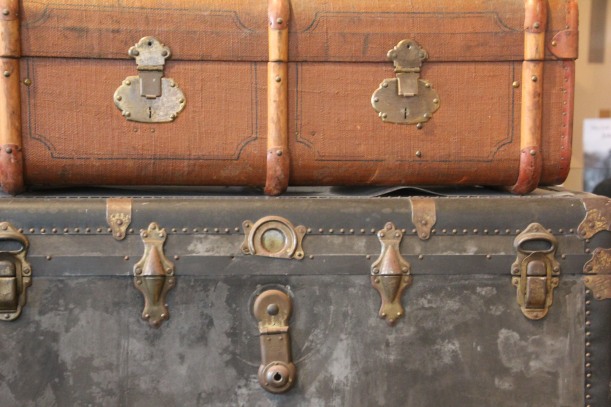 Both the luggage and the passengers had to be inspected.

The rest waited in benches in a huge and beautiful room. 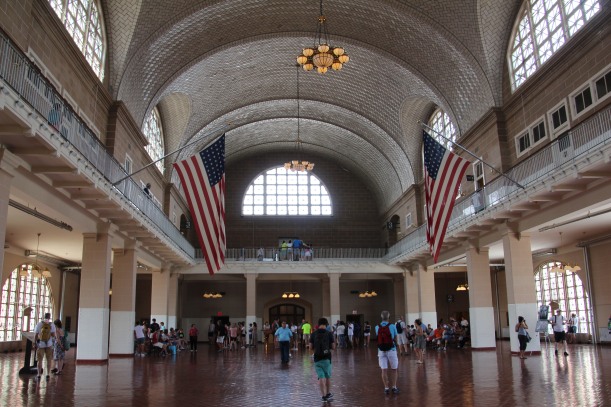 The Grand Hall waiting area would have been filled with long benches.

Perhaps they had never seen such a place before, or if they had, as the ranger said, rooms such as this would have been built in castles, not for people like them. 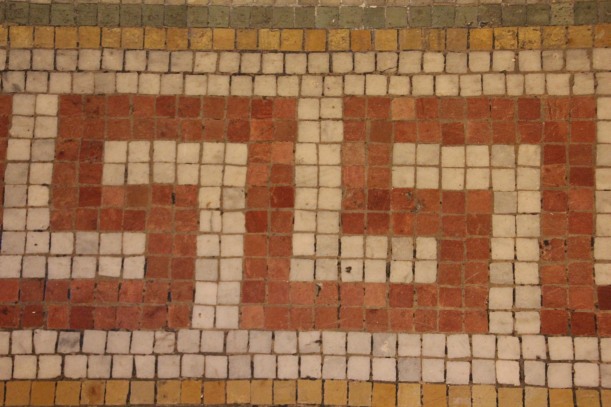 But this was America, where anything was possible. Note the curved tile ceilings and the mosaic floors.

An immigrant could wait for a few hours, or days for their name to be called, but once it was they moved forward to answer the inspector’s questions. They were the same questions the ship company asked; What is your name, Where are you going? Where will you live? How much money do you have? If you answered correctly and passed the eye exam and a cursory physical you were allowed to leave and begin your new life. 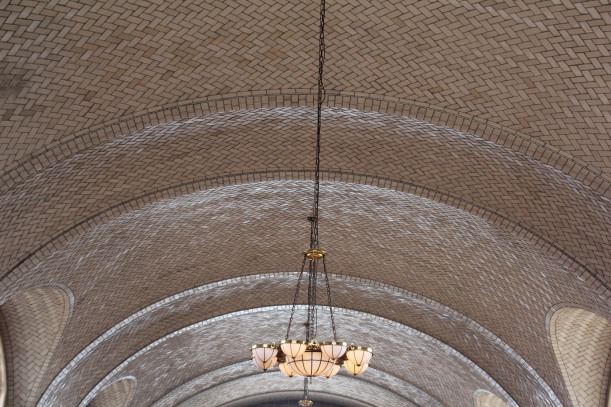 Notice the beautiful tiled arches. And the original fixture.

If you did not pass, say you forgot the address of the family member taking you in, you were sent to have a hearing. You could bring in witnesses to collaborate your story. Many immigrants had never seen government treat them so fairly. It was one of their first lessons about freedom in America, and ninety-eight percent of those that arrived were eventually allowed into the country.

Still, it was a terrifying experience, to travel in the belly of a ship, arrive in a strange place, listen to strange languages, be told where to sit, be questioned by uniformed strangers. What hope and strength they must have had to travel toward such an uncertain future. 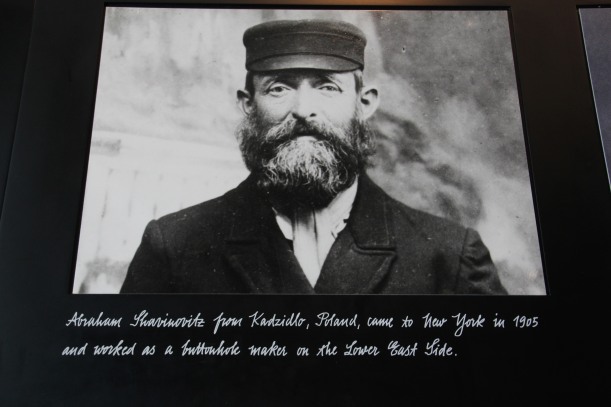 Thousands of people a day. So many faces.

They told us that forty percent of Americans today can trace a relative through Ellis Island. Forty percent of us owe our lives to someone that took the risk and came to make a better life.

If you’re ever in New York take the time to visit this historic place. Look at the views of Manhattan from the windows of the grand building. Think about what it must have felt like to sit looking across that water at the place you’d dreamed about. 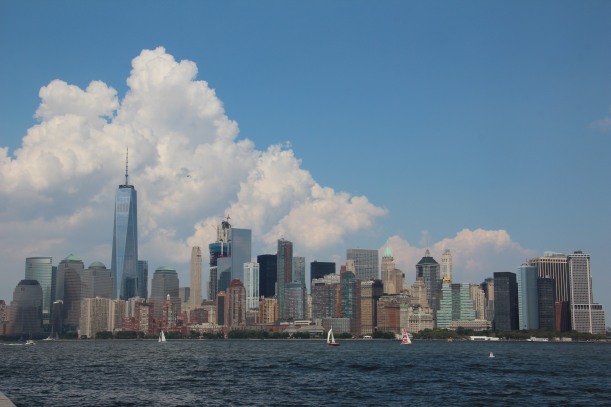 Over there was opportunity.

And think about all they had left behind; family they’d never see again, familiar homes and towns. Think about what it must have been like to have only a few possessions, a few dollars, to know only a few people here in the new country. 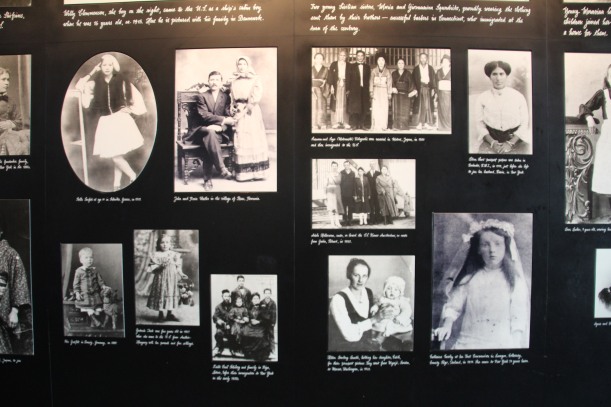 Then think about how lucky we are to have been born here. Regardless of your political views, regardless of the stress of an election year, regardless of economic times, this is still the greatest country in the world.

We should take time to appreciate that. 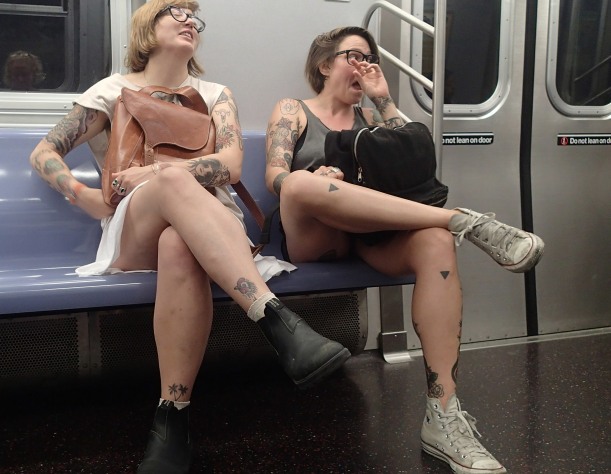 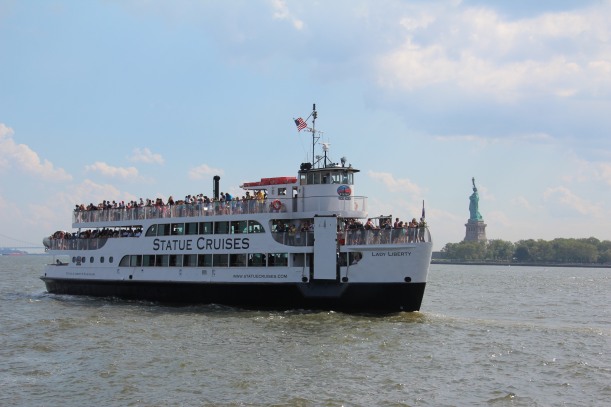 Going to see a lady.

You take a boat over to visit Lady Liberty. If it’s a hot July morning the boat will be filled with hundreds of people, all herded on board like steerage. Which seems appropriate when you think about it. But no one minds too much.

All eyes are on her. 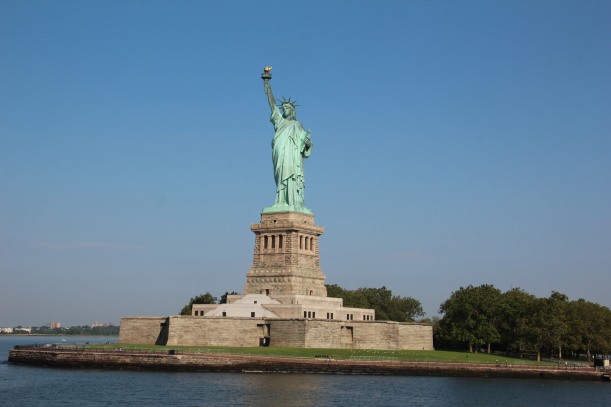 You pay an extra five dollars to go up inside the pedestal and enjoy the view. It’s worth the money and the 200 or so stairs to enjoy the view and the breeze. Yes, you could use the elevator, but why, when there are stairs to climb just for the taking? Once out on the pedestal walk you have an up close and personal view of Ms. Liberty. 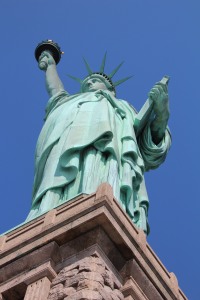 Or, if you have a zoom lens you can get even closer. 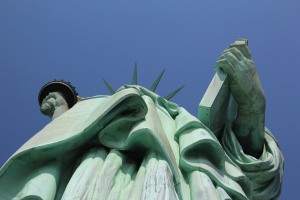 She’s ready for her closeup.

Once you go back down the stairs, don’t skip the museum. It’s not large, but it has some interesting details. Like how they built her. 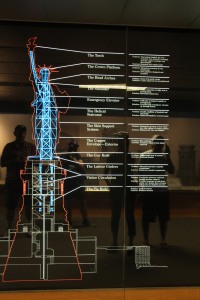 Not an easy task.

And full size features of her face and her toes. 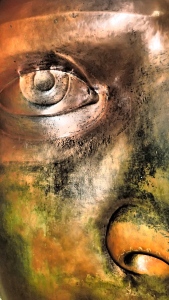 Afterward, tour the grounds a bit. Take some more pictures. It’s not an easy angle to get your family member and the Lady in the same shot. 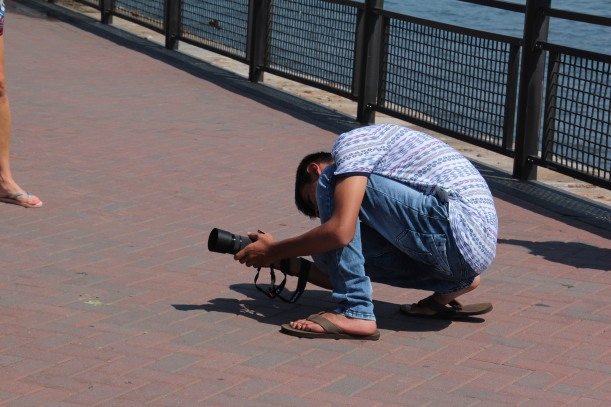 But it can be done.

Enjoy your Statue of Liberty! She’s there for you.