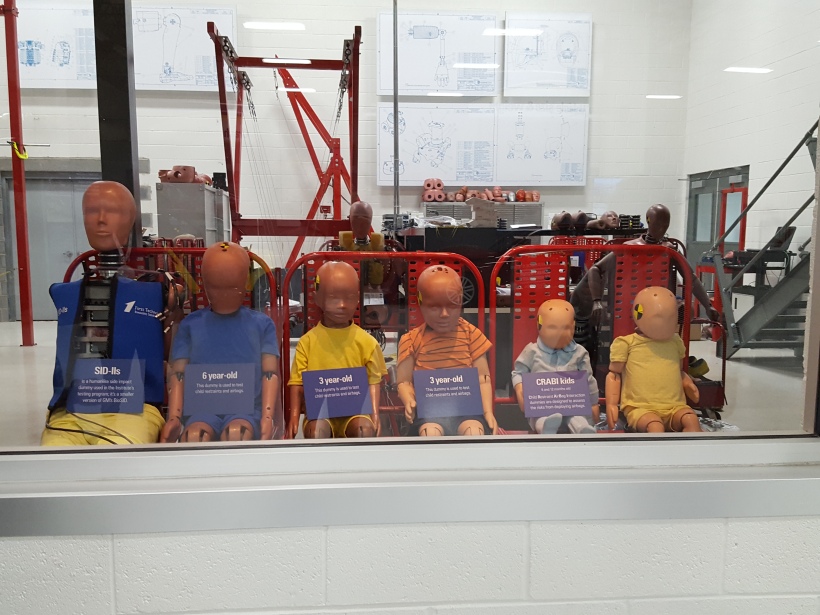 I’d never been a witness to a test crash before. I suppose not many people have. It’s kind of a surreal experience, especially for a person that’s had a loved one die in a violent crash.

My husband and I, along with several other of our truck safety volunteers attended an all day conference at the Insurance Institute for Highway Safety in Charlottesville Virginia on Thursday.

And it wasn’t just us in attendance.

In an unprecedented move truck companies, trailer manufacturers, safety advocates, bicycle and pedestrian representatives, policy makers, and researchers were all together in one room to talk about the problem of truck underride.

Most of you don’t know what truck underride is, and I wish I didn’t have to explain it to you. But because our country is a generation behind Europe you probably haven’t seen a truck sporting a side guard to keep a car from traveling under the trailer in a crash.

Perhaps, if you’ve been in New York City or Boston recently, you’ve seen city trucks with side guards; those two cities have now mandated this safety precaution after several bicyclists and pedestrians were killed by falling beneath the trailers and being crushed by the wheels.

Side and rear underride is a huge problem outside cities too. As you pass a semi out on the freeway, and if it’s safe, glance over and see where the underside of that trailer would hit you if you slid under. Just about the height of your head. And if you slide under your airbags won’t deploy as there would be no impact of the engine and front of your car. The first impact would be the windshield, and that won’t save you.

And don’t think you’re safe if you hit a semi from behind. Many of the rear guards were built to 1953 standards and will collapse if you hit them with any speed. Once again, the only thing between your head and the back of that trailer will be the windshield. 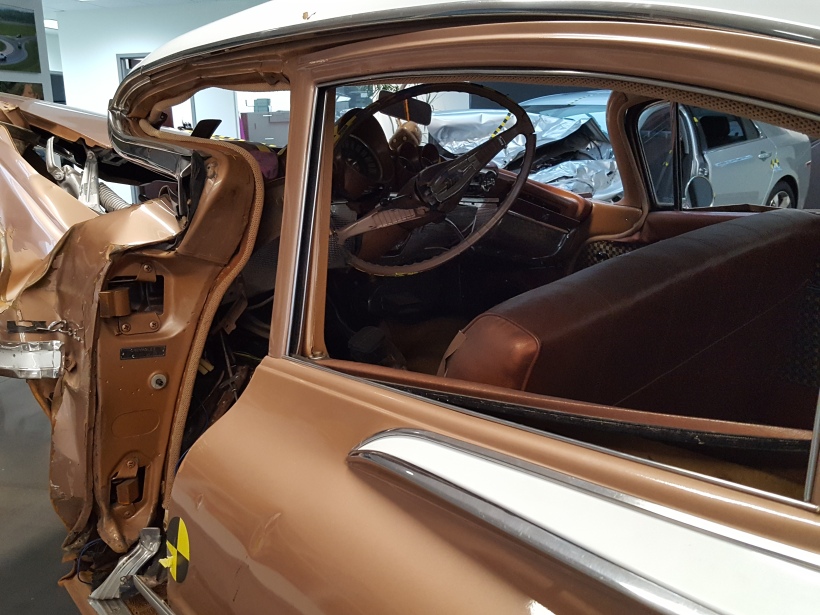 In the lobby of IIHS. No airbags in the old days.

So for years safety advocates, including the Truck Safety Coalition, have been asking the Department of Transportation to require better rear guards, and to start the process to mandate side guards. It’s another one of those no-brainer things that we just can’t seem to get done through normal channels.

Thursday’s conference wasn’t a normal channel. Never before has the industry met with the safety people to discuss making changes that would move ahead of any regulations that might some day come out of the D.O.T. Never before has such candid conversations been held, without animosity, without rancor, with only safety in mind.

At noon we went into the lab and watched a test crash of a Malibu slamming at 35 mpr into the back of a semi trailer that had been equipped with a new, stronger rear guard. Some of us weren’t sure we wanted to witness such a thing, but we’re all glad we did. 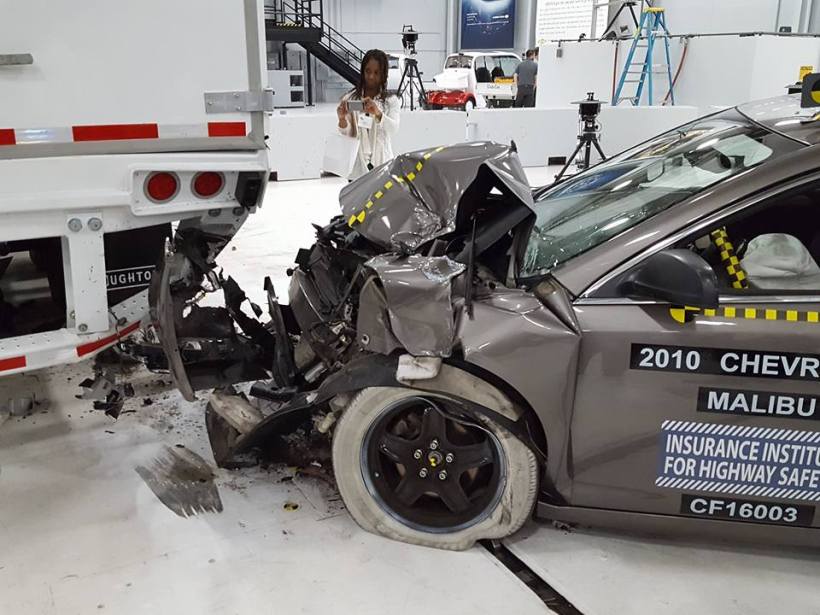 The dummy survived this crash because the rear guard was strong.

Because in this case the new rear guard held up and the passenger compartment, crash dummy inside, was not penetrated. (You can watch the crash test here.) Everyone inside this particular car would have survived. For many people the test crash was the highlight of the day. But I thought the highlight was later in the program. 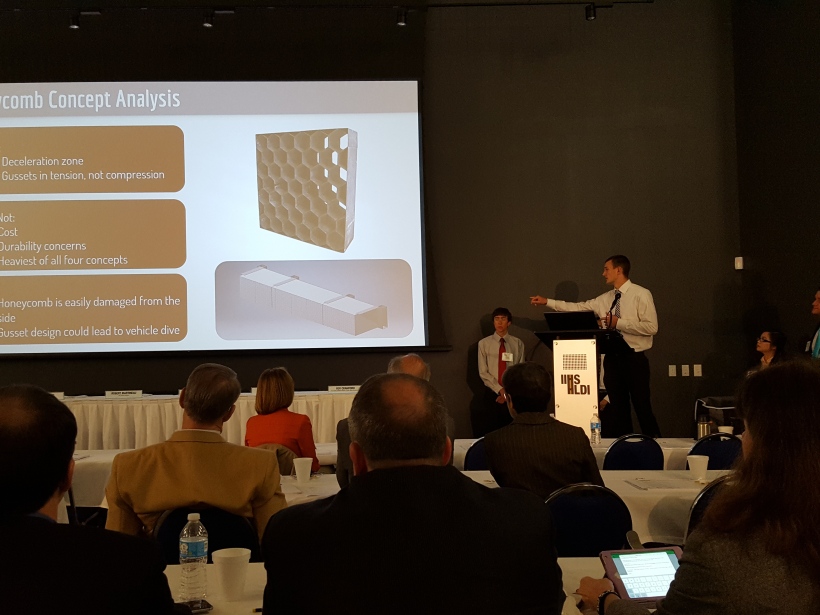 Explaining one of their designs they didn’t end up choosing to build.

Those students almost made me cry. They were undergraduates, the project assigned to them was to build a better rear guard for a semi truck. They, like most people, had never heard of underride crashes before. They learned about the problem, dreamed up a number of potential solutions, weeded their options down to four, and then figured out which one was the most plausible, most acceptable to both the trucking industry and safety advocates.

And then they built a it. 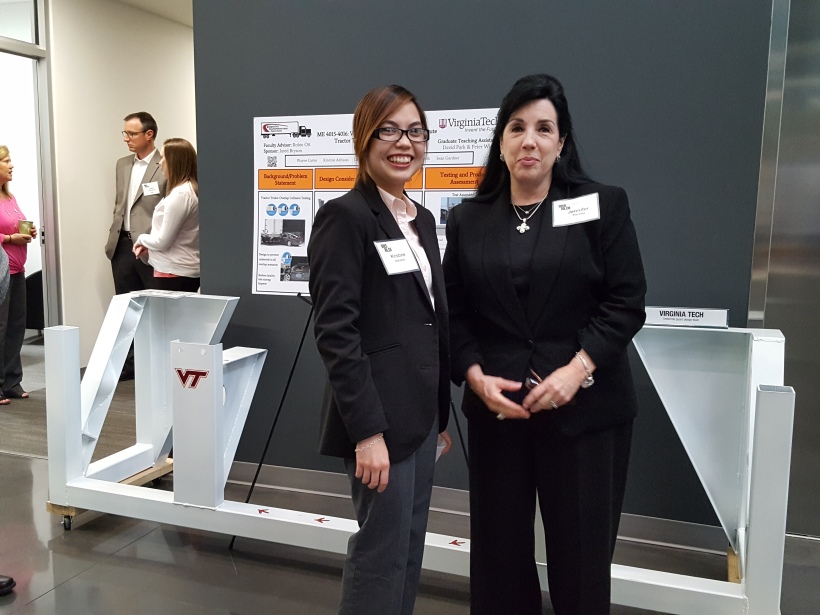 Virginia Tech student and a Truck Safety Volunteer who has been fighting for side guards since her dad was killed 33 years ago.

Incredibly 18 and 19 year old young people spent a year on this project, realized the importance of their work, and were brave enough to come and speak about it to a group of adults working in the industry. They were excited about their design and proud to show it off. And a room full of jaded adults sat respectfully listening, leaning forward, following along, congratulation the students at the end for a good design, inviting them to join the industry after they graduate. To think that this whole room of people, including the kids, was there to make the roads safer for everyone. Well. That just about made me tear up.

It should make you tear up too.

Because change is happening. It’s happening because we’ve moved past regulations and asked the industry to listen and to do what’s right. And they are responding. Not everyone. And not every request. But some. And some change will lead to more change. And every step we make toward safety saves another life.

Change is hard. But it’s not impossible.