Mama stopped at my park as we were leaving town so I could say goodbye.

Mama says this blog needs a little levity and I think I’m just the girl to provide it. Besides, you haven’t heard from me in a long time and I have been off adventuring! I knew you’d want to hear all about it.

So let’s begin at the beginning. With snow. Mama and I decided we needed to escape winter. This year we’ve had plenty of snow up in Michigan and the lake house in Alabama was calling our name. So Wednesday morning, bright and early, we hopped in the Katie-mobile and headed south.

It took us forever! We had to stay in a hotel for two nights! (Don’t tell mama but I sort of like that, all those new sounds and smells you know.)

Both times we were on the second floor so I got to do the elevator a bunch. I am very good at elevator, though I have to say I don’t really like it. I mean, who wants to get in a little windowless box and then stand there while the floor shakes and there are noises and then get back out of the box again? What’s the point people?

Our first hotel near Louisville KY

Sometimes we used the stairs. I have no trouble going down stairs now, if mama goes ahead of me to show me the way. But I refuse to go up them. I don’t see so well and I misjudge the distance and end up flopped on my tummy. That hurts (mostly hurts my ego) so now I don’t want to go up stairs at all. Mama carries me and says she’s glad I don’t weigh any more than 20 pounds.

On the drive I made mama stop a bunch. Just about every rest stop. I just love rest stops, all those dogs before me leave messages and I leave my messages for the dogs that will come after me. It’s a great communication system.

The rest stop in Tennessee had these big silent people in it!

The very last rest stop had the best dog walk ever! It wasn’t just some mowed pasture, it was a trail that went up and down a ravine. It was like being in the woods! There weren’t any big trucks nearby and no cars either.

This is the best rest stop mama!

Mama and I walked around in there for a long time. Some other dogs just walked along the top but my mama and I are adventurers and we went way down to the bottom and then up the other side even though it was really steep and mama is a wimp.

Our trip was a little longer than it needed to be because mama fell in love with a bunch of barns in Kentucky and she had to make a few side trips looking for more. She says it’s not fair that she sees all these great places when we’re on the freeway and there aren’t any exits. I let her have her way, but I’m not letting her post her barn pictures in my blog. No siree. She can post them later while I’m taking a nap.

We did stop and explore a little town when I decided I wanted to take a walk. We looked for a park and found one way down a big hill. We walked a bit along a flooded river, but it was pretty muddy and mama made me get back in the car.

Then we walked around the downtown area a bit. Mama saw this cool mural and wanted my picture with it. She tried to make me sit on that bench in front of the mural but that didn’t go so well so she settled for this picture of me with the mural in the background. Sometimes I win our little arguments.

Hurry up mama. This is embarrassing.

Well, as you know, we eventually got to the lake house. We immediately explored the back yard and I marked it as mine. Mama wanted me to sit on the dock so she could get me and the clouds that were reflected in the still water. But just as she set me up a boat came roaring down the shoreline. She tried to get the picture quick before the water was disturbed, but I wouldn’t look at her. So this is what we got. Mama gets aggravated sometimes, but never with me.

So far mama and I have been mostly napping. One time I was taking a great nap on my deck when suddenly a boat showed up! I thought that was very interesting and I watched intently as these guys kept throwing something out into the water. I swear, people are crazy. They didn’t even have a dog with them to fetch all that stuff back! 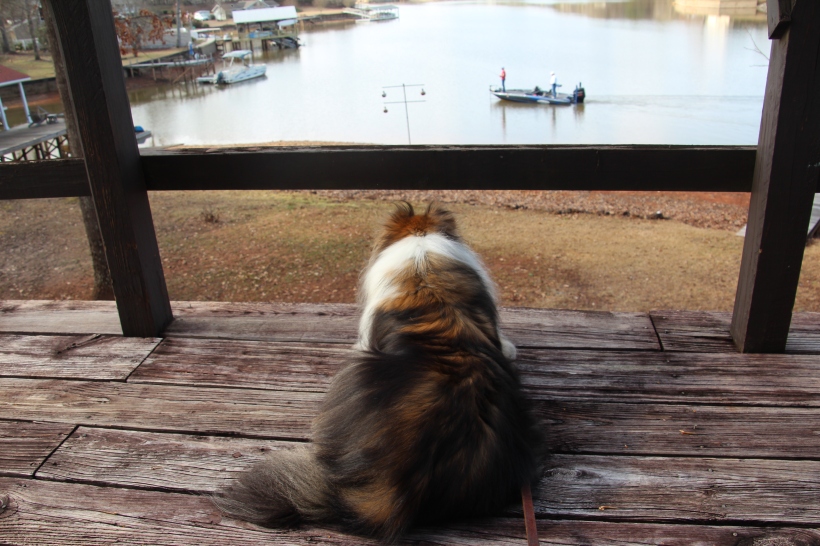 Silly people out there on the water.

Our first day here was sunny but it rained last night and made my driveway all green. Mama thought it was pretty so I had to sit there and let her take more pictures. Sheesh. But I made her pay for that one by taking me to Keebler park in town.

Lots of green down here, especially after it rains!

It’s a pretty little park with a paved trail. I only walked half of it because, after all, I am a princess and a princess does what she wants to do. Even though I made my mama drive me all the way there I soon let her know that it was time to head back to the house for another nap.

Thanks for bringing me to this great park mama, now can we go home?

I’m sure we’ll go on more adventures down here, at least to visit my Uncle on his lake and my Aunt at her house. We might even get some visitors here, you never know. I’m just very happy to be here where things are blooming and it isn’t snowing!

In my own backyard!

Stay tuned, if I do anything exciting I’ll let you know!

Sunshine and no snow!