Some of you have been wondering exactly what we do when we go to DC to work on truck safety issues. And now that I’ve brought that up I suppose there are some of you newbies to the blog that wonder what truck safety issues I’m talking about. So here’s the short version of the story.

We had dinner along the river at sunset our last night in DC.

My dad was killed almost fourteen years ago by a tired trucker. He was stopped in traffic on a freeway in Georgia, headed to the Atlanta airport, when a semitruck, being driven by a relatively new driver hit him from behind going 65 miles per hour. He died, they say, instantly.

The driver said he had fallen asleep.

The driver was over the number of hours he should have been driving, had been driving all night. The crash happened around 6 in the morning on a straight piece of highway. Police, ambulances and firetrucks were already there, working on a previous crash. Everyone had slowed down and stopped as they worked their way around the existing crash.

The semi driver didn’t see any of that.

After dinner we went for a walk.

Once we got over our initial shock and began to learn the truth we found that the problem was much bigger than just our crash. In the fourteen years since I’ve met dozens of people who have either survived such a crash, being hit from behind by a truck driven by tired or distracted drivers, or have lost loved ones in crashes that sound exactly like my dad’s.

And that’s why I go to Washington regularly.

We talk to the staff of Representatives and Senators. We ask for legislation to fix some of the loopholes. We ask for support of legislation that is already pending that will make the roads safer for all of us in passenger cars and for the drivers of big trucks too.

A new building, made of green glass. I thought it was stunning.

We talk to agencies in the Department of Transportation; to staff and management of the Federal Motor Carrier Safety Administration, to the people at the National Transportation Safety Board, to different departments within the DOT, all of whom are responsible for different aspects of road and vehicle safety.

Sometimes we talk to truck manufacturers and trailer manufacturers. Some of them are moving forward with safety technology even though the government is all wrapped up in studying stuff and not willing to mandate safety.

We spent a long time watching this fountain as it changed colors.

This past week we had a meeting with the FMCSA Administrator. He is new this year and is facing an uphill battle to get much of anything done. What else is new in Washington, right? He said a lot of the right things, but the reality is that very little will change.

Maybe nothing will change.

I’m not sure they’re even studying much of anything now. I looked at those (mostly) men, sitting in their expensive suites and wondered how much money they made to get absolutely nothing done. They talked a lot about what they were doing and why things were hung up.

We talked a lot about how frustrating it is to work on issues for decades without seeing movement. They mostly didn’t look us in the eyes.

There were lots of pretty lights.

And while we were there we met with a few Senators and Representatives’ staffs. They aren’t doing much either, but they listened politely. 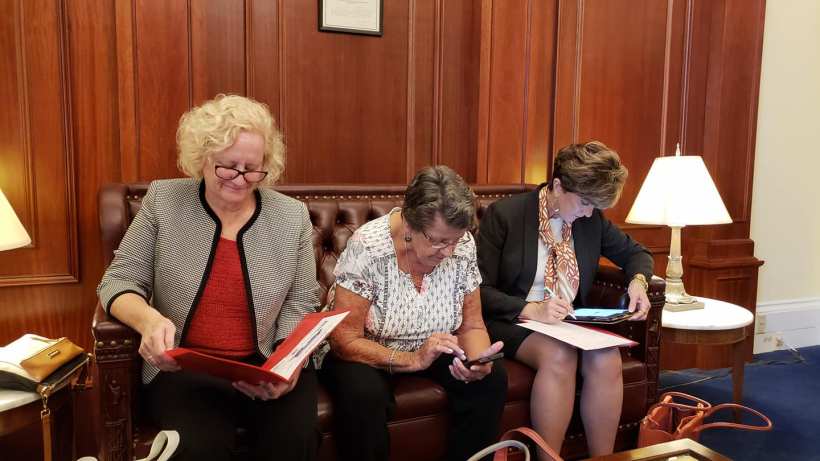 Studying our notes before meeting with Minority Leader Pelosi’s staff.

It’s not enough. I’m tired of getting symbolically patted on the head and told they’re sorry for my loss. I’m way beyond needing to make them cry. Unless it’s to cry when their boss loses their next election.

This bridge was beautiful too in a sort of patriotic way.

It’s the only way we’re going to start making a difference.

While we were in the FMCSA meeting on Wednesday the 2017 truck related deaths and injury numbers came out. Four thousand seven hundred and sixty-one people died. That’s up 9% from 2016.

That’s staggering. And it’s why I continue to go to DC.

So now you’re up to date. Pictures were taken on our last evening in the city, using my cell phone. Not quality pics, but they do give you a glimpse of the pretty side to the city. 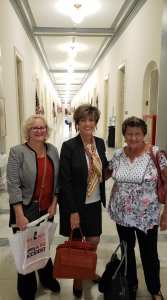 Working hard to save lives.