Mostly content to stay at home these past few weeks, I started to feel camera withdrawal yesterday. It was warmish out, bright blue sky, big puffy white clouds, the kind that would look lovely hanging above a red barn or two. 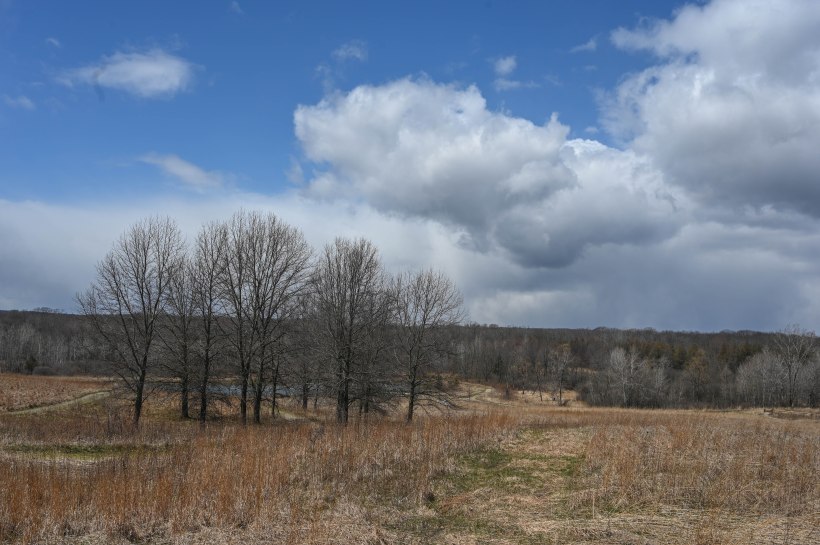 But, here in Michigan, we’re still under a stay-at-home order. We’re supposed to stay put unless we’re going to the grocery or the pharmacy. Darn. I don’t have any drugstore needs that are close to barns.

I think it’s still legal to go to a park and walk. But somehow that seemed like too much work and I stayed inside and painted little postcards instead. As I sat at home watching the sun set amid big puffy clouds, listening to the weather report I began to regret my decision. 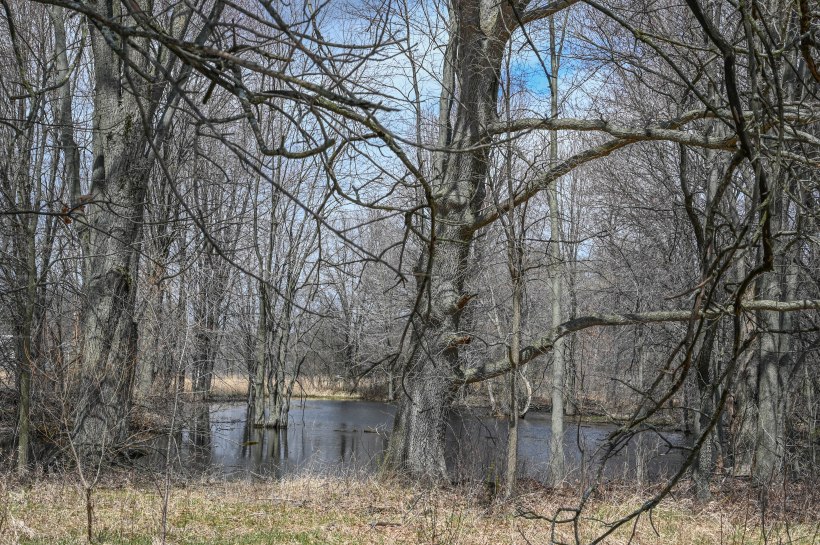 Not much snow over winter, but plenty of rain this spring.

This morning, still in bed, but staring at the dark ceiling and listening to the wind tear by the house and the rain pound on the roof I figured I had lost my opportunity for a park walk. Just because the park didn’t have barns, I told myself, was no reason not to get off my behind and go see what there was to see.

I figured today wouldn’t be the day.

But by early afternoon I noticed blue sky and big white puffy clouds. Huh. So it was only 28 degrees (-2.22 C) and there was a stiff wind, so what, right? Blue skies and puffy white clouds called for a camera adventure.

So I bundled up and headed to a park only 6 miles from me that isn’t usually busy. Plus it has my favorite line of photogenic trees.

But 2 miles from the park I noticed ahead of me what looked like a dust storm. Maybe a farmer was plowing a field? No, of course not. This was not dust. It was snow! 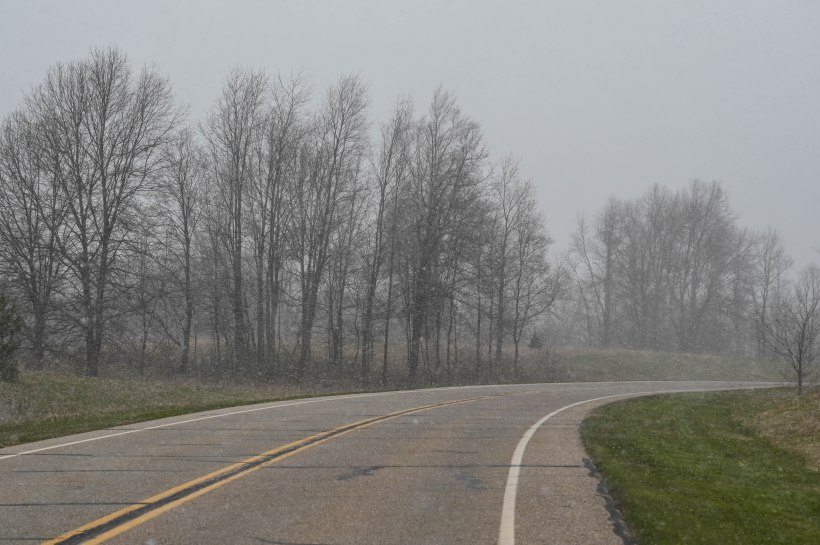 Things did not look promising heading into the park.

The park I was going to visit, the one where I was going to walk nature trails to the top of a hill and photograph blue sky and puffy clouds, was in the middle of a snow squall!

I almost kept on driving, right past the entrance. But I figured I was out there, I could see what might be worth photographing, preferably from the car. And then I’d just go home where obviously I should have stayed in the first place.

I sprinted from the car to the shelter of the nature center to get my obligatory image of the line of trees I so enjoy. 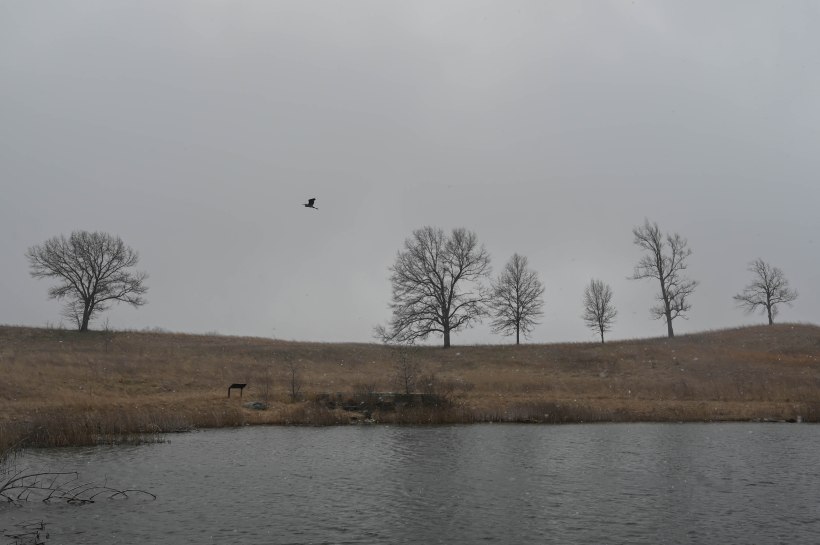 I didn’t even realize the heron was flying and in the image until I looked at it later.

It was still snowing. A heron flew over my shoulder and landed on the opposite side of the pond. He kept moving away as I approached and of course I didn’t have my long lens on the camera. 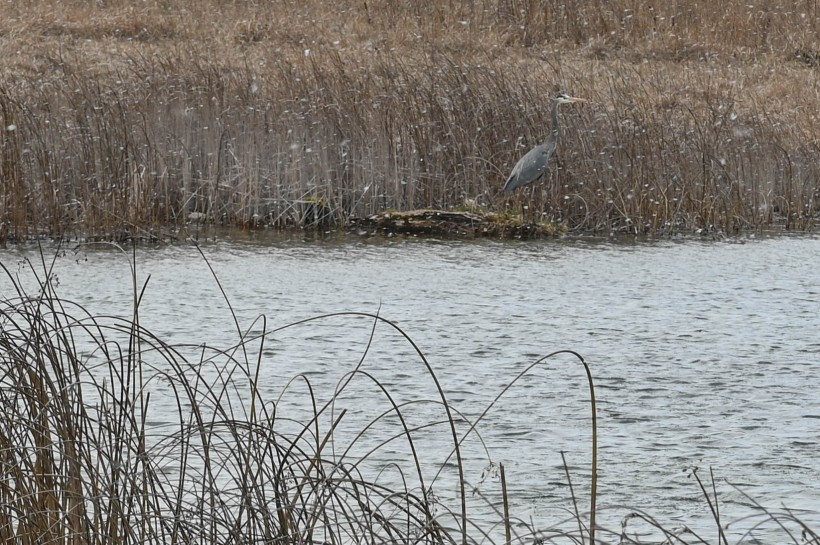 Can you see him standing over there? Wrong lens on the camera, this is a cropped version, and he’s blending into the rushes at the edge of the water.

So I gave up on him and headed up the hill. 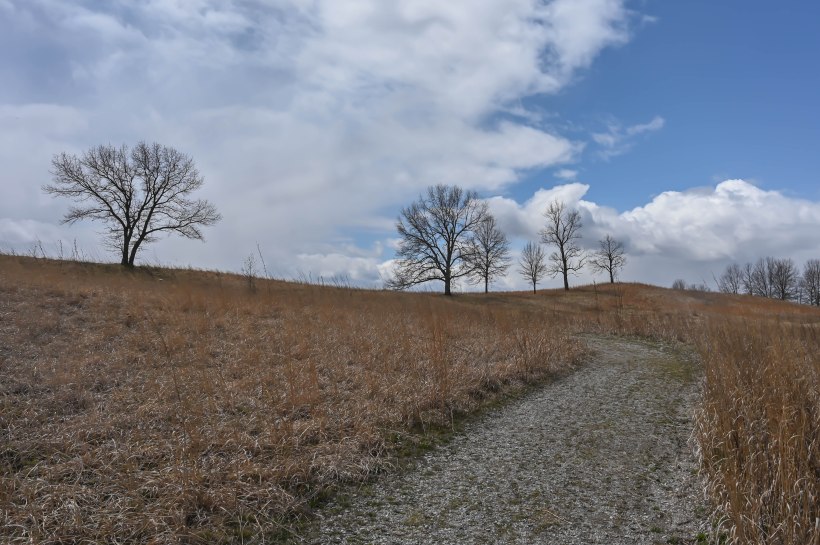 Why look! Is that blue sky I see?

And as I did the sky brightened and the blue sky returned along with beautiful clouds. Behind me the snow clouds were still producing, but on the nature trails the sun was shining. 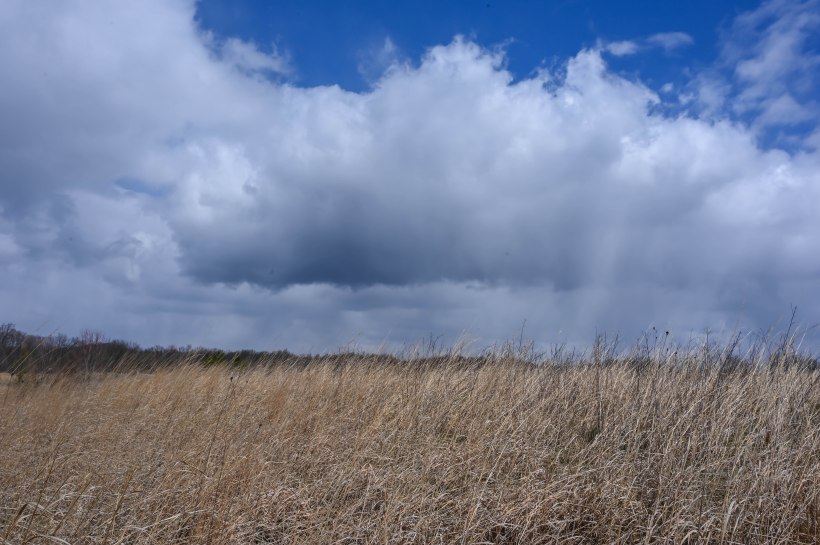 Snow clouds are just over the ridge.

You never know what will happen if you just show up. Sometimes you have to make a decision which way you’ll go. But as long as you make the best decision you can, with the information you have, well, you’ll be just fine. 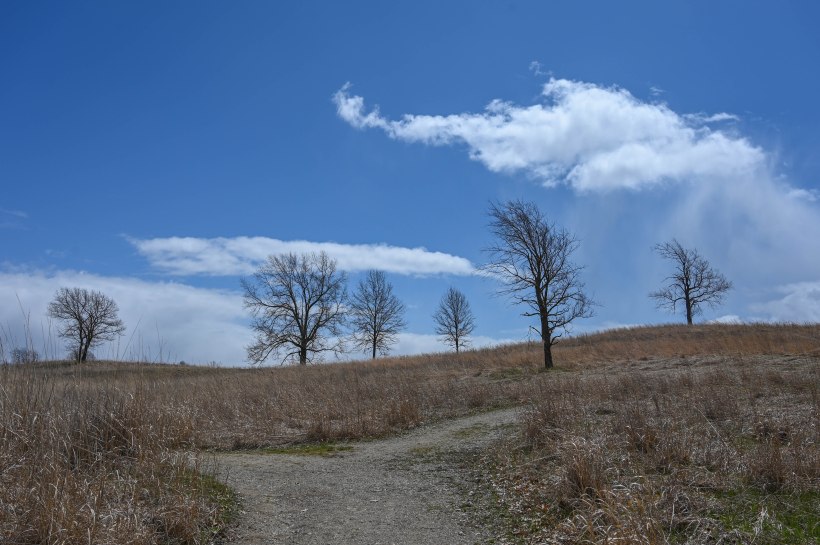 Either way will work out.

As soon as I was safe and warm back in the car it began to sleet. 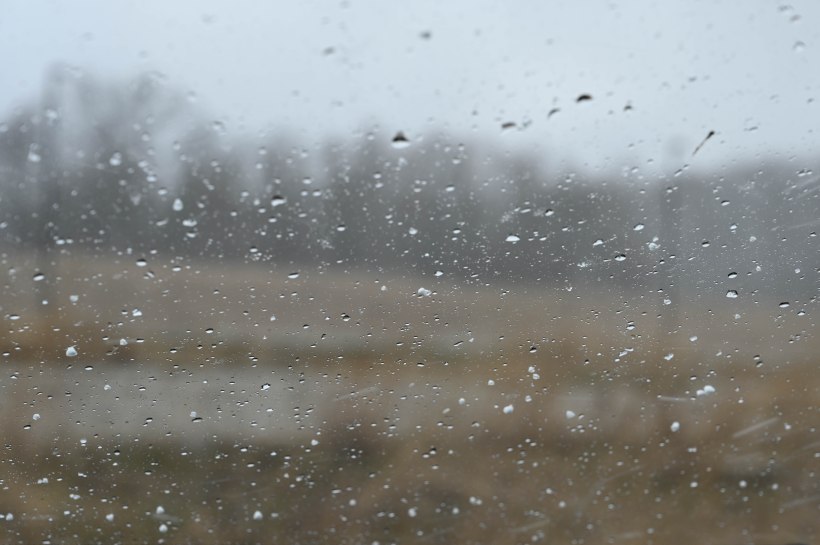 The wind picked up and sleet pounded the windshield.

And on the drive home I saw more snow clouds coming from the west. 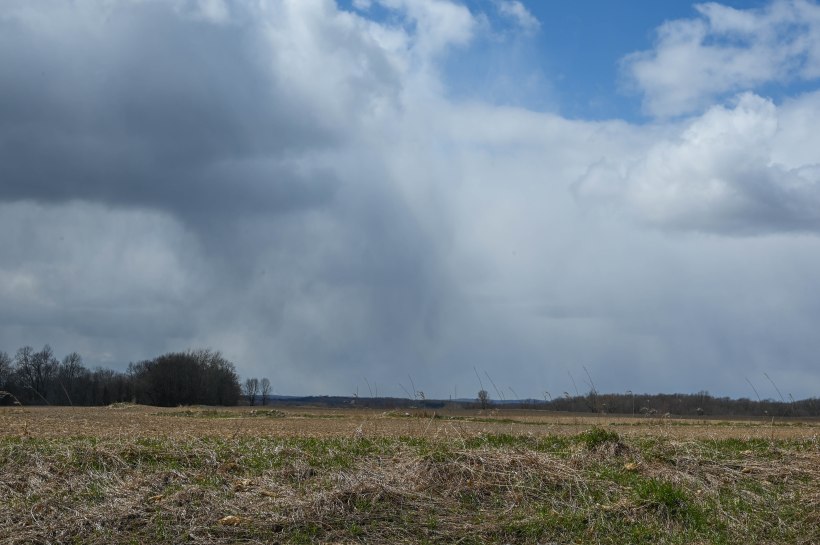 Spring in Michigan is a mixed bag. Every year.

Yep, I had a sliver of an opportunity to get out there and enjoy the sun. I’m sure glad I took it, even if it’s obviously not really spring around here yet. 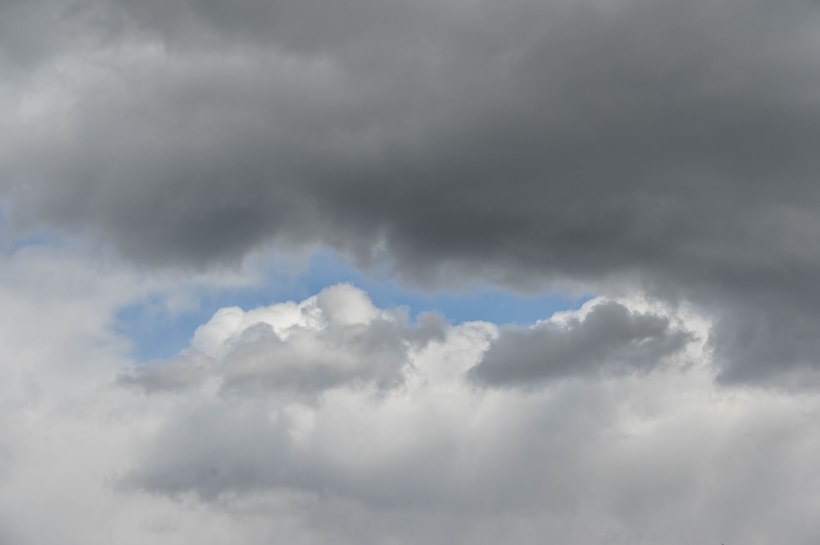 Just that one fleeting moment of sunshine.

On the other hand, maybe it is.

21 thoughts on “What season is it anyhow?”