I’ve been missing my mom the past week or so even more than usual. Those of us with moms who are gone miss them every day, but sometimes the ache is just more profound.

I’ve found myself wanting to give her a call. To ask her how she did so much with all of us when some days I don’t seem to get anything done at all.

I wonder how she kept her gardens up. I don’t have any memories of her weeding, though she had gardens in our house in Adrian, and again in Howell, and then in Alabama. I can’t keep up with the gardens we have, and I don’t have nearly the responsibilities she did when we were growing up.

And meals. I know I’ve talked about this before, but how in the world did she manage to get a meal (or two) on the table for six of us every single day? I know we took it for granted and often asked her what was for dinner. I don’t remember ever reacting negatively to her reply, but just the question alone placed all the responsibility on her and she must have felt that weight.

When we were older, did we ever make a meal for the family? Sometimes on Sunday we’d make the coffee cake for evening supper. Wow, what a relief she must have felt, ey? One meal during the week where we made something, though I imagine she was there to supervise. I don’t remember ever working in the kitchen that she wasn’t there too.

And let’s not even start talking about laundry. Though I remember knowing how to do laundry at an early age, I also remember mom sitting on the sofa with six growing piles of folded underwear surrounding her as she tried to match all the socks. It seemed to be never ending.

I know we had Saturday chores, the vaccuuming and cleaning the bathrooms and probably a whole lot more that I can’t remember. I know the list on Saturday of things we had to get done before we could go off and do whatever kids did back then seemed long.

I remember her finally coming down to the family room in the evening after she finished whatever chore she had attacked at the end of the day. We’d all be down there watching the big bulky television and she’d settle on the sofa between a couple kids, or next to dad.

And she’d instantly fall asleep, in what I realize now, was sheer exhaustion.

Once upon a time I thought she and dad were too old to up and move across the country when they were fifty, leaving everything they knew behind. Now I’m fifteen years older than they were then and I don’t think it’s odd at all to contemplate and even accomplish such an adventure.

Mom and dad had plenty of adventures, both when we were kids, and after we had left home. But I think of those early years with all four of us and dad to take care of and I don’t know how she did it.

I hope she knows that I recognize her work now and wish I had expressed that to her all those years ago.

I guess today is Mother’s Day in my heart.

I’ve taken advantage of some of these unseasonally warm November days to clean up the perannial gardens.

Hidden under a carpet of fallen leaves.

And I’ve been surprised, more than once, at what I’ve found.

Tucked in among the grasses.

Just see what a little persistence can do.

We planted a little ‘wild flower’ garden this spring, and it’s in full bloom now. Lots of pretty blossoms, mostly annuals, reaching for the sky.

Our little bit of wildflowers.

Today one of them opened.

You are my sunshine…

I smile everytime I walk past this patch of flowers, but now with the sunflower I positively grin.

The details are amazing.

Hope you are smiling too!

Pink is pretty too. 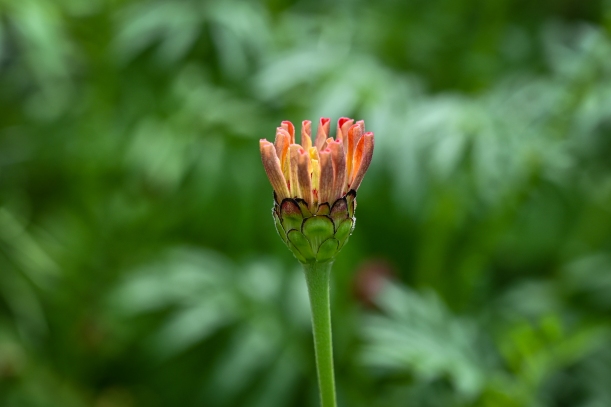 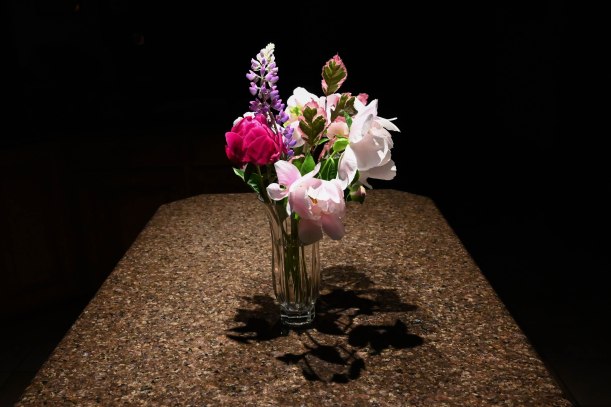 This week it’s been hard for me to find something to smile about.

So many families with broken hearts this week.

The news was filled with awful things. The virus killing over 100,000 Americans. The protests and violence stemming from the death that reminds us of other similar deaths.

No, this week I didn’t feel much like smiling.

And then my silly girl wouldn’t sit pretty for a picture and I had to smile…just a little. 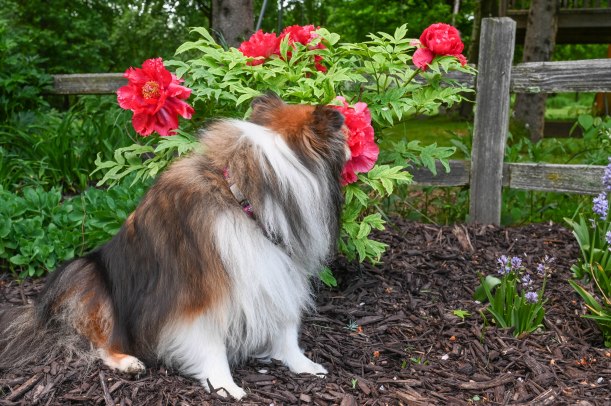 Reminding us to stop and smell the flowers.

Yes, this week I looked really hard for something to smile about.

Oh, all right mama. I’ll look at your silly camera. Sort of.

And I found it right here at home.

I hope I made you smile too!

You know when you’re growing your grey hair out, how your hairdresser tells you that you should use this purple shampoo once in awhile? You don’t? Well let me tell you, there’s a lot more to understand about having grey hair than I realized when I made the decision to stop having it colored way back in October.

Late yesterday afternoon I suddenly couldn’t stand being in the house a minute longer.

Not to say it’s not pretty in my own yard.

I’ve been good about staying home, only going out for groceries. Yes I did take Katie to the woods for a walk one day — we saw no one else on the damp, drizzly forest trail. And four weeks ago I took a drive by myself to photograph barns, another instance when I just couldn’t stay here for another moment.

Yesterday I just had to go somewhere so I went to a local park, the one where nature trails wander up over grass covered hills. Getting there around 7:00 p.m. I thought the sky looked interesting. Maybe there would be a sunset worth watching.

Wandering up the hill into the evening light.

I had fun just wandering around. Especially when I found a patch of little lupine hidden among the tall grasses. With the sun slowly lowering the blossoms were lit in the prettiest light. I spent some time walking through the grass, crouching down as I tried to get that light just so.

It was hard to get down close enough to show the light showing through the petals.

And then I walked the rest of the way up the hill to see what the sun and clouds had planned for their last show of the evening.

Turned out the sun slid behind a tall pillar of cloud long before sunset officially arrived. And there wasn’t really much color. Still I took a few shots before I wandered back down toward the car.

Not much of a sunset after all.

And that’s when the storm front moved overhead. The sky darkened and became absolutely beautiful with tall white clouds the center of attention against the black ones following close behind.

A bench to sit and watch the show.

I took a lot of pictures of that combination, the black and white clouds hovering low over the rolling hills. The darker it got the more dramatic the sky became.

It became a dark and stormy night.

And the more the mosquitoes swarmed. The swallows began to fly lower, scooping up the bugs and the sky grew darker and I hurried to the car, making it to cover just before the rain set in.

I was pleased with the pictures I had, but less pleased, later that night when I found two ticks, one on my leg, and one on my neck. Well darn. I’m not sure those lupine shots were worth it! 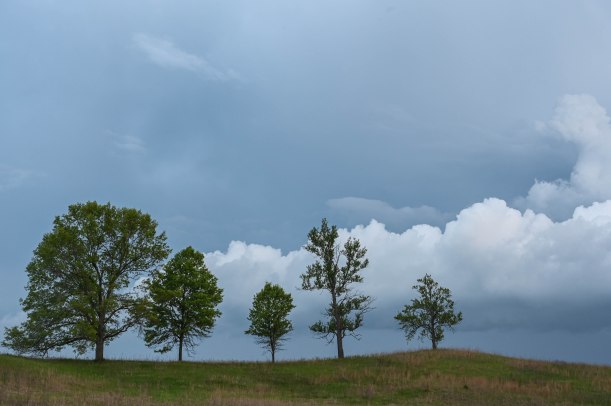 One last look before I ran for the car.

The rest of the night, and all day today I kept thinking I felt things crawling on me. Finally I decided to take a hot shower and before I got in I remembered that purple shampoo I’m supposed to be using once in awhile. It’s been more than awhile since I used it, so I grabbed it out of the cupboard and shampooed up, wondering why grey hair needs purple shampoo. And then I felt it. A little bump, right on top of my head. About the size of a tick.

Sorry, I have no pictures of ticks.

Frantically I squeezed it between two fingers and put it on a shelf where I tried to see what it was. Not wearing glasses I couldn’t see anything. I turned off the water, stepped out of the shower and tried to grab my glasses from the vanity. That movement made the purple shampoo drip into my right eye. It stung. Now I really couldn’t see anything.

Dripping all over the floor I grabbed a towel and tried to clear up the stinging eye, but no luck. And whatever it was was still lurking in the shower. So I put my glasses on and using one eye went back into the shower to examine the ‘bug,’ hoping it hadn’t crawled away.

These yellow flowers are all I ever get to see.

Turns out it was a bit of dried up purple shampoo, from the bottle that hadn’t been used in longer than awhile.

Well that’s a relief. Apparently the cost of the walk in the hills was only two ticks, I guess those pictures were worth it after all. But next time I take a shower to make sure I’m tick free I’m going to put my glasses somewhere I can reach them without getting out of the shower.

And maybe not use the old purple shampoo.

Yep, stuck in the yard, no adventures for me.

Too much travel lately made me lose track of the weekly smile. It definitely wasn’t intentional, because I truly believe the world can use more smiles. 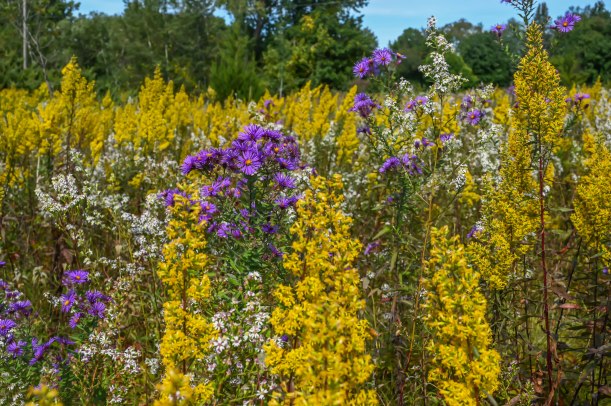 Just a little bit of pretty.

So today, when I remembered I hadn’t officially smiled in a couple weeks, I headed out to find you something to smile about.

Sure I could have just given you the Canadian images, but those weren’t from this week. And even though looking at travel photos always makes me smile I figured I should find something new.

The place was abuzz.

Just about a mile up our country road is a corner filled with pyramid shaped goldenrod and dark purple asters. If I happen to go by when the sun is low I can’t help but be mesmerized.

There were tiny white asters too.

So I smiled a lot as I wandered in this little patch of pretty, even though my target for today’s smile was another place a few miles up the freeway.

A garden further up the road.

Yep, just a couple exits north of here is a swanky subdivision that I drove by yesterday on my way to buy birdseed.

I hadn’t been up there most of the summer, so I was amazed to see the entrance, full of huge canna lilies and tall dahlias heavy with blossoms.

Somebody in this subdivision has a green thumb and a whole lot of money.

An end of summer burst of energy.

Still, it was stunning in an entirely different way than the little yellow and purple field near my home.

Every year, at the end of summer the annual gardens just glow. We could have a frost any time now, and all of this will be gone.

The tallest cannas I’ve ever seen.

So I was happy to capture a bit of it so that I can remember it during our long winter months.